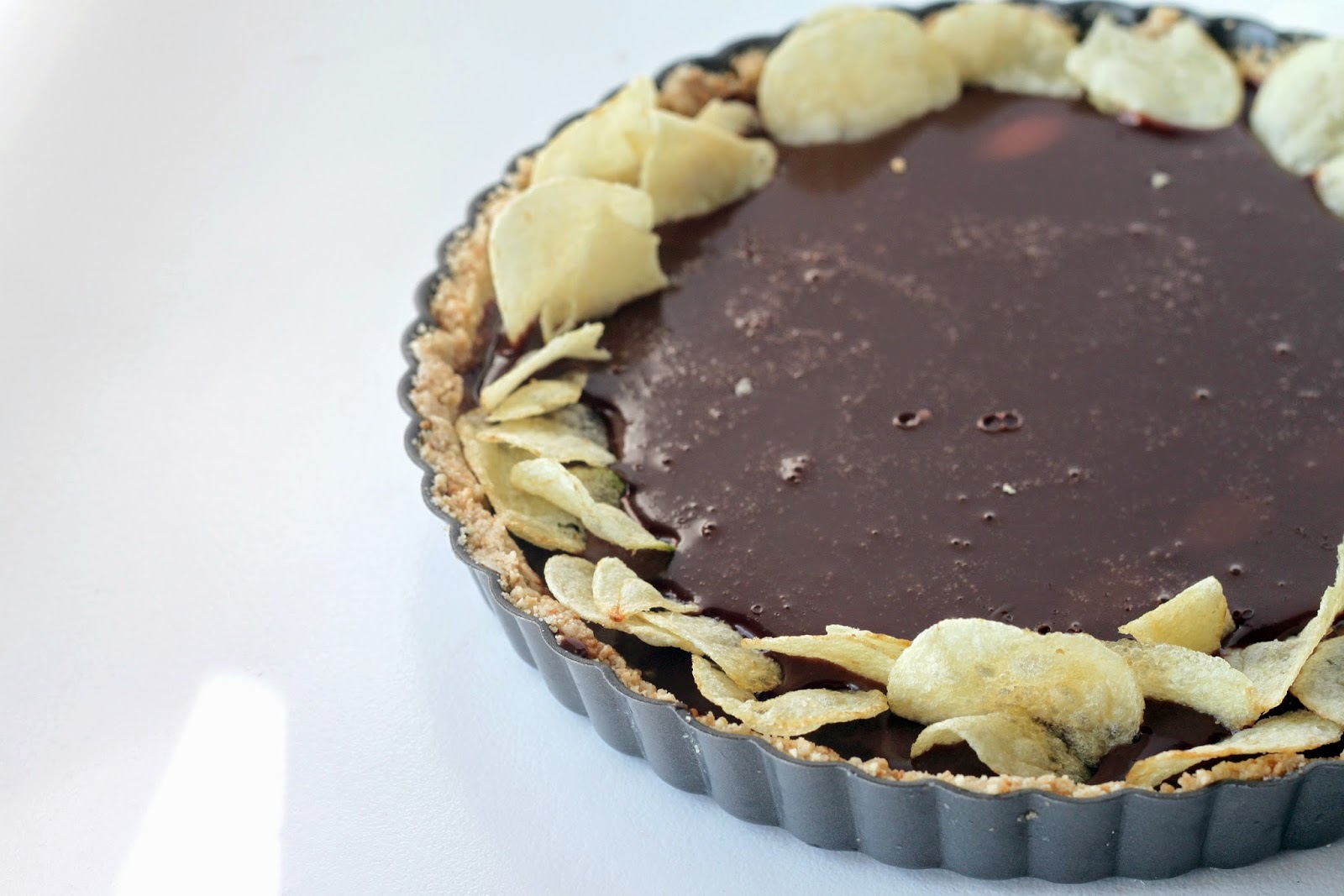 My thoughts are scattered very often and even more so when it comes to food. I’m so easily stimulated by what I see on television, read in books, what’s on display at grocery stores, and what I have on hand in the kitchen. I’ll start off concentrating on what dessert to make for a dinner party or a friend with a flavor in mind. Then I’ll go to the grocery store and notice something else on sale or some item next to the one I’m looking for, which will trigger a new dessert idea. It’s a long endless chain and the proof lies in my pantry and this blog.
I was perusing the new items display at Trader Joe’s when I saw they had chocolate-covered potato chips. I didn’t actually purchase the product, but it made me think about the combination of sweet and salty. Often, I used to eat a potato chip after eating a piece of chocolate and it made my mouth do a happy dance. I never thought of eating them both at the same time though. Something about the salty aftertaste mixing with the new sweetness seemed better to me than eating a potato chip completely dunked in chocolate. But since I hadn’t tried it, I decided not to knock it just yet. Instead, I thought I’d try to make a simple dessert that incorporated potato chips and chocolate to see if they really were that harmonious.

So later that day in another store, I wandered into the snacks aisle (rare for me, since I’m not salty-toothed) and I noticed a bag of honey-wheat pretzel sticks. I actually haven’t eaten a pretzel in years, and when I did it was always the sample ones in the mall that were coated in a layer of cinnamon and sugar so thick I was unsure there was actually a pretzel anywhere under there. Even in this case, I still chose the pretzels that had honey in the title, which I’m sure is very telling.
Either way, I thought they’d be the perfect base crust with some chocolate and topped with potato chips. I couldn’t figure out a way to use the potato chips without them getting soggy though. My original idea was to crumble them up and put them around the pan but that wouldn’t have lasted. So instead I had them sticking out the tops so that at least the tops were clear of any moisture. Of course, if you do this make sure you eat it within the day or it’ll get stale! When we couldn’t finish it in one day, I just plucked off all the potato chips and may or may not have eaten them all in one sitting.
So here we are; a simple honey-wheat pretzel crust mixed with some sugar and butter and pressed into a 9-inch tart pan (possibly the easiest crust of all time). Filled with creamy, dreamy milk chocolate ganache and topped with a few potato chips. You can omit the potato chips and just add some sea salt if you like.  You can also use dark chocolate but my favorite combination is the sweetness of milk with a bite of coarse salt.
No one could guess what the crust was made of but they all agreed it was delicious. The tart was gone almost as quickly as I made it, and Joe said its shot up to his top five of my favorite desserts. The pretzels add a very nice crunch to the bottom, along with a small hint of sweetness. You’re then met with a mouthful of smooth milk chocolate followed by a kick of salt, either by actual sprinkled salt or a potato chip. I dare you to try this.
In any case, the tart minus the salt and the chips is still just as delicious :)
Recipe
Makes one 9-inch tart

Preheat oven to 350 degrees F
Blend in a food processor until combined and press into a tart pan.
Bake for 20 minutes, then remove and let cool.

Melt the heavy cream in a saucepan over medium heat until scalding. Put the chocolate chips in a heat-proof bowl or into your food processor. Add in the cream and pinch of salt; let sit for a minute.
Turn on the food processor and beat until combined, or use a spatula to combine together.
Pour into the tart shell and place in the fridge for at least one hour before serving.

Note: It tastes best when the tart sits out for about 20 minutes (the filling gets all creamy!) but Joe preferred it completely cold, go figure.