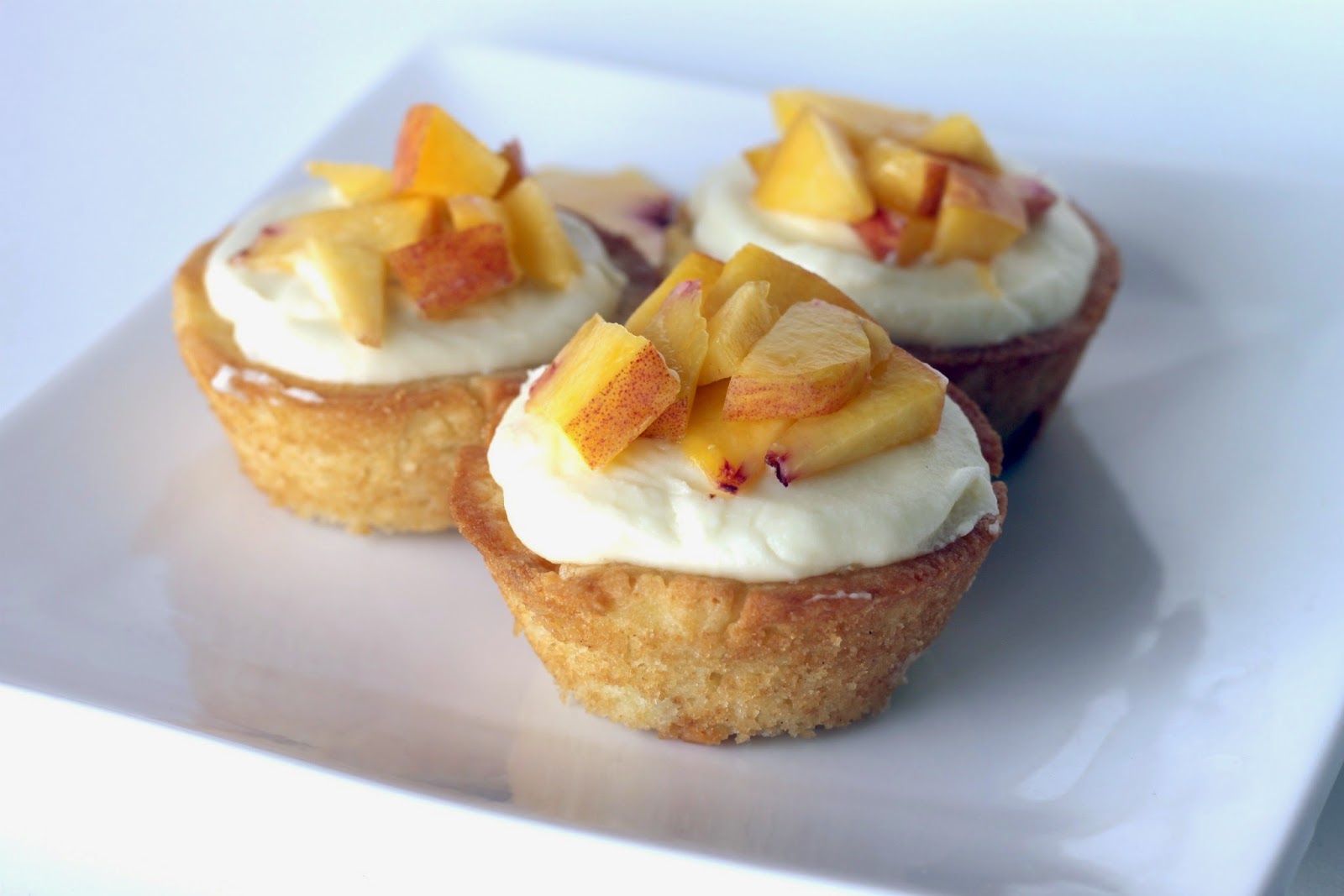 This cupcake was inspired by wedding colors I’ve been forced to look at recently for a friend who’s planning her wedding. The colors of peach and white caught my eye, and my mind immediately went to desserts. I’m not a huge fan of peaches, but something about peaches and cream sounded so dreamy, comforting and delicious. Sure, summer is long gone, but I wanted to capture the end of it in one final, perfect cupcake. I rushed to the store and managed to nab the last of the peaches in stock. 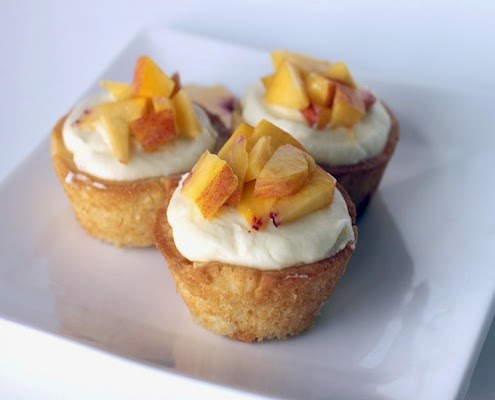 The result was a fluffy vanilla cupcake studded with white chocolate chips, a dash of cinnamon and a hint of ginger, filled and topped with fresh peaches and accompanied by a sweetened honey-whipped crème fraîche frosting. My boyfriend took these to his hospital rotation and they were gone within minutes, with many of the nurses telling him he needs to marry me. So, yeah, these cupcakes are good.


The cake is very soft and one of my all-time classic recipes; the peaches could have been slightly sweeter, but their flavor certainly came through. The crème fraîche was the perfect topping – not too sweet and slightly tangy with a twist of honey. Feel free to bake the peaches, I just prefer uncooked fruit to cooked!


For those unfamiliar with crème fraiche, it’s similar to sour cream but richer in texture. It’s available at Trader Joe’s and you can add sugar according to taste (I adjusted when I found that my peaches weren’t very sweet.), or you can make your own using this recipe. 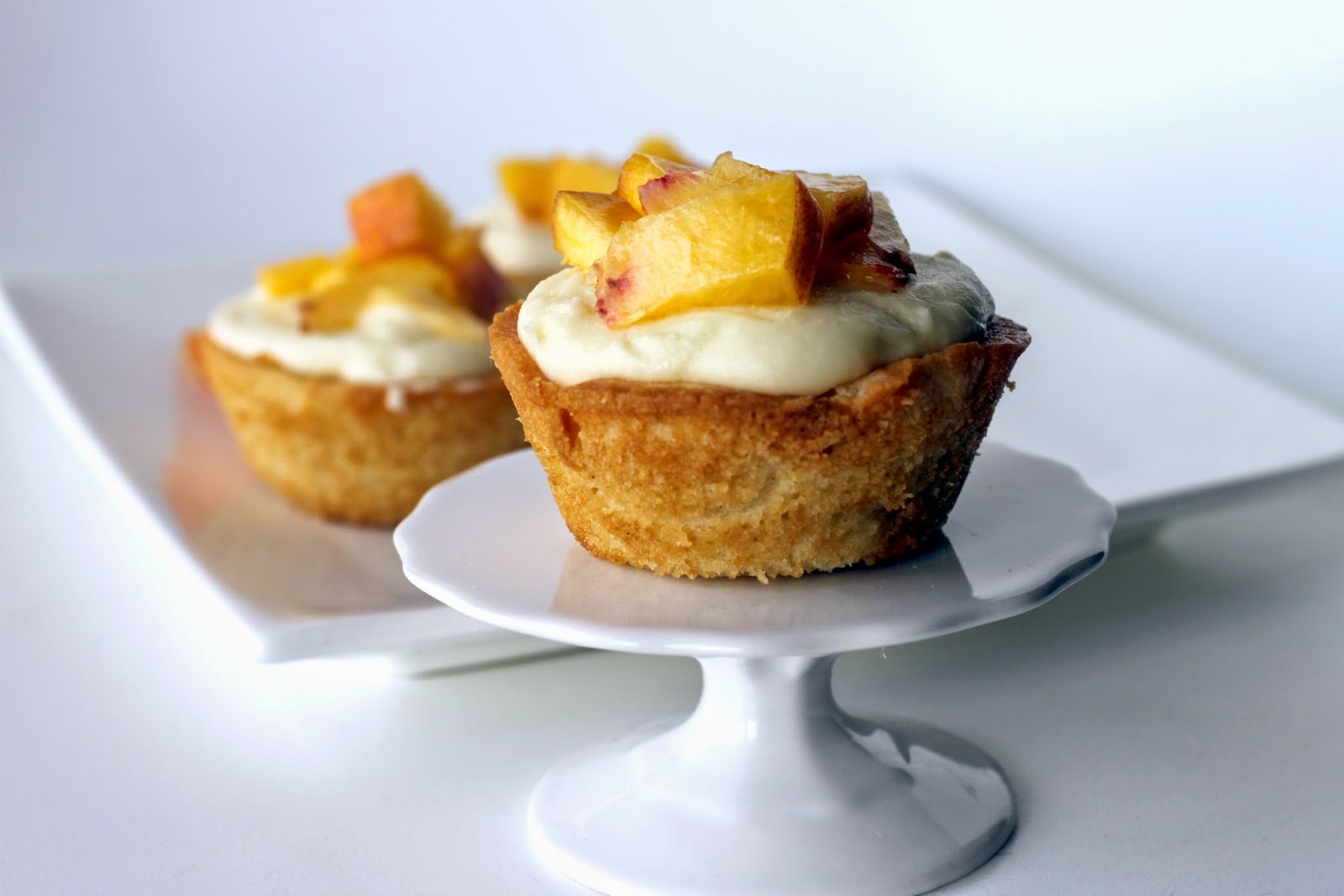 
1 stick butter (at room temperature)
¾ cup of sugar
1 tsp. vanilla
2 eggs (at room temperature)
1¼ cups of flour
¼ tsp. baking soda
1 tsp. baking powder
¼ tsp. ground cinnamon
¼ tsp. ground ginger
¼ tsp. kosher salt
¼ cup of sour cream
¼ cup plus 3 Tbsp. white chocolate chunks
1 8-oz. container crème fraîche
1 cup powdered sugar
1 Tbsp. honey
2 small peaches or 1 large peach, peeled and cored
Preheat oven to 350 degrees.
Beat the butter and sugar together with an electric mixer on high until light and fluffy.
Add the vanilla, then the eggs, one at a time, beating well after each addition.
Sift the flour into a separate bowl, then add the baking soda, baking powder, cinnamon, ginger and salt.
Add the flour mixture and sour cream into the butter mixture, and mix just until incorporated.
Stir in the white chocolate chunks.
Bake for 17 to 19 minutes, or until a cake tester comes out dry.
Meanwhile, make the frosting: Place the crème fraiche in a bowl and add in the powdered sugar and honey. Beat on high until combined and fluffy.
Remove the cupcakes from the oven and let cool completely.
Chop the peaches into small pieces.
Once cool, carefully cut holes in the center of each cake and fill with the chopped peaches.
Top each cupcake with frosting and garnish with more chopped peaches!
Labels: creme fraiche cupcakes fruit peach