Ever since I got the Okashi cookbook, along with my Laduree cookbook, it's been completely neglected. I couldn't help it, I was drawn to the gold rimmed pages and velvet-y French book... it was lust at first sight!
But finally, I decided to give it a break since the recipes either asked for way too much butter than I had or wanted to have on hand, or the desserts were just too extravagant for a lazy Sunday afternoon...
So I turned to Okashi and chose a recipe I had had my eye on for quite a while...
One of the desserts I loved as a kid were the Little Debbie swiss roll cakes. Now even thinking about them disgusts me... they're so overly sweet and I remember them often being smushed and stuck to the wrapper. No idea why I liked them so much, besides it just being overly sweet chocolate... Over the years, I started to try the Japanese/Korean swiss roll cakes and found those rather delicious. They're not as sweet and often green tea or mocha flavored. They are much more delicate with a soft texture.
The cookbook has a recipe for a souffle roll sponge that you make on a large baking sheet, and spread a filling all over the inside. Then you roll it up and cut slices!
I, however, wanted to change it up. The cookbook has a recipe for birthday cake that is essentially the swiss roll cake but sitting up vertically, with one strip rolled up, and the other strips wrapped around it, making one large coil. Then you frost the outside and when you cut it you get gorgeous vertical strips! 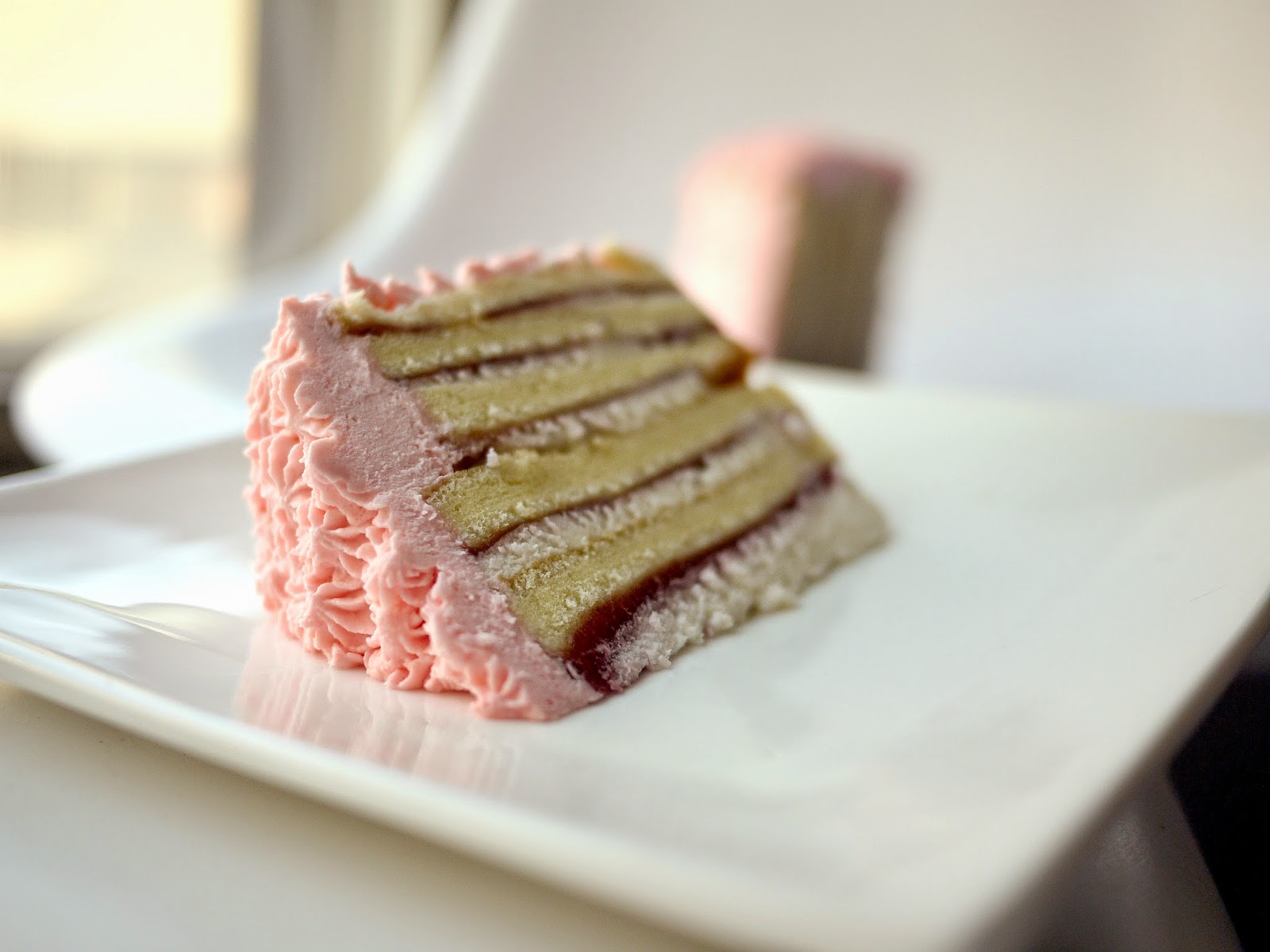 Since I'm on a raspberry kick for spring, I put a thin layer of raspberry jam on the sponge roll first, and then a layer of mascarpone frosting which was simply divine. Then I rolled it up, coiled the other strips around it and propped it up vertically. I frosted the outside with more mascarpone frosting, because, hey, can you ever get enough of that stuff?
The results were delicious. My friend HLi had it the night before and for breakfast the next morning! The texture is very fluffy and springy and the recipe is very adaptable; the book includes green tea and banana caramel variations. I caught Joe eating it in the kitchen over the sink, proclaiming "this is the best cake ever!" (at least that's what I think he was trying to say... his mouth was very full of cake and frosting).
I urge you to make this cake. It's so easy yet it looks so fabulous. I'm still surprised at how little effort it takes! I used my general rectangular cookie baking sheet to make the cake, but the book recommends a 28x28cm square cake pan lined with parchment paper.

Vertical Swiss Roll Cake
From Okashi
Serves 6-8 ppl
1 Egg
3 separated eggs
1 tsp vanilla extract
35 g butter
60 g cake flour
60 g whole milk
85 g castor (superfine) sugar
Preheat the oven to 350 degrees F.
Combine the egg, egg yolks, and vanilla extract in a bowl and whisk lightly.
Place butter in a small saucepan and heat gently until melted.
Add flour to the melted butter and cook through.
Transfer the butter-flour mixture to a bowl, and add the egg mixture a little at a time.
With a spatula, mix into a smooth batter and add the milk. Strain the batter and set aside.
Place the egg whites in a bowl and beat until foamy.
Add the sugar and continue beating until the result is glossy and there are stiff peaks.
Fold in the egg white mixture into the batter and fold carefully until just incorporated. Pour the batter into a 28x28cm cake pan and spread evenly with the spatula.
Bake for 20 minutes.
Let cool before adding jam and filling!
Recipe
Mascarpone Frosting
Frosts a 2-layer 6-in cake with plenty left over.

Combine the cheese, sugar, salt, and vanilla together. Stir it till smooth (or beat it, but the cheese is so smooth you shouldn't need to!) Beat the whipping cream to stiff peaks but don't let it curdle. Fold the whipped cream into the mascarpone mixture until combined. Add any food coloring if using.
Spread a thin layer of raspberry jam on the entire cooled cake.
Spread a layer of mascarpone frosting on the entire cooled cake on top of the jam.
Cut the cake into even strips (if you are meticulous, then measure it out to ensure it's all the same height). Roll the first strip like a swiss cake roll and prop upright. Take the other strip and wrap it around the roll, and do the same with the remaining strip (I had 3, you may have more).
I placed this on a cake board and let it chill in the fridge before frosting.
:)
Labels: cake fruit mascarpone raspberries special occasion