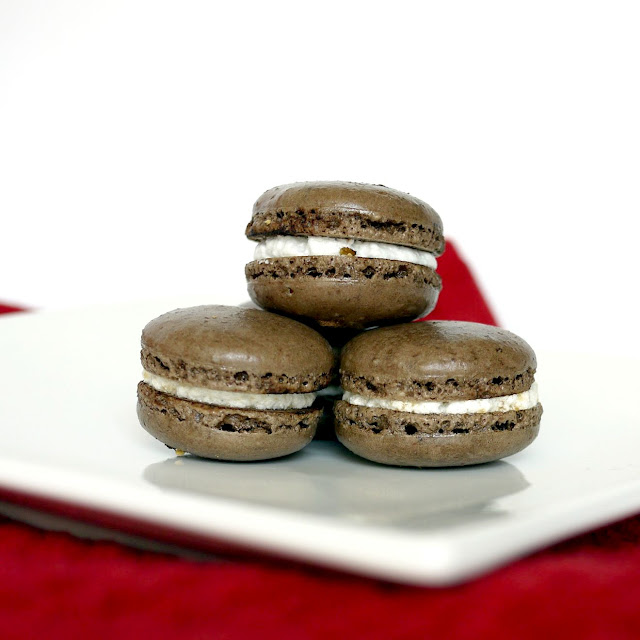 HLi sent me a really interesting article by The New Yorker on desserts. It's worth a read but it's rather long, and a particular quote really stuck out to me, by a chef, Alex Stupak:

When you’re conceptualizing an entrée, a protein, you generally expect to get a piece of that thing intact. In pastry, it doesn’t occur. Pastry is the closest that a human being can get to creating a new food. A savory chef will look at puff pastry not as a combination of ingredients but as an ingredient in itself. Pastry is infinitely exciting, because it’s less about showing the greatness of nature, and more about transmitting taste and flavor. Desserts are naturally denatured food.

I whole-heartedly agree with the quote, and it reminds me of why I love making desserts. There's just so much room for creativity. I noticed in the Laduree cookbook that many of the pastries are slightly altered but are more or less the same... A cream puff/profiterole is made from choux dough... when you pipe it out long, it turns into an eclair. And if you deep fry it and pipe it out differently, you get a churro. Not to mention all the variations on brioche dough, or pastry cream. The tastes and flavors are so nicely altered depending on the combinations and methods.
A few questions that the article posed were, why do we use dessert to end our meals? And how did a whole form of cooking come from sweetness? It's made me quite contemplative lately, although I haven't come to any conclusion about it.
What are your thoughts?


On to my inverted s'more macs!
For those who may not know, s'mores are a popular American campfire treat consisting of a roasted marshmallow and a layer of chocolate sandwiched between two piece of graham crackers. And the word "s'more" is a contraction of the phrase "some more"! 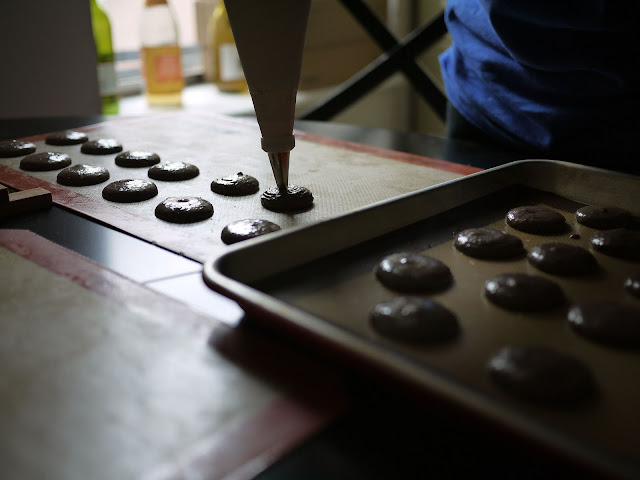 When I heard about the latest MacTweets challenge, I was excited to try the Laduree cookbook recipe for chocolate macs. I mean, they're the inventors of the macaron, how could I not?


But I was so awed by the recipe, my friend HLi who was visiting (and took the photos) teased me the entire time. I'd never seen a macaron recipe ask for melted chocolate poured into the meringue, and the egg whites not whipped to the firmest of firmest peaks, not to mention, a half egg white separately whipping and tossed in at the end... How very odd!


Overall, the macaron shells were so delicious and rich they really did not need a filling. I ate most of them as single shells and they're great for snack-y little cookies... 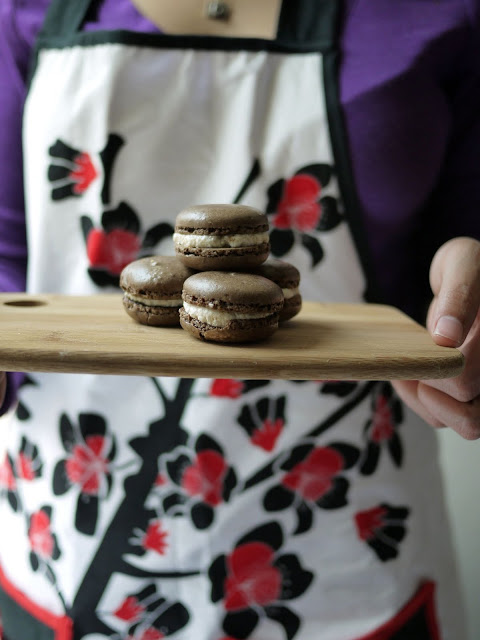 But for MacTweets, and only for MacTweets, I tried to think of a filling that would work. I also just love my blowtorch and have been looking for any excuse to make it. HLi also has an amazing camera with a fancy lens and we wanted to get some shots of the blowtorch in action.
So I decided to try a marshmallow filling with ground graham crackers mixed into it, and then torched it before sandwiching it... 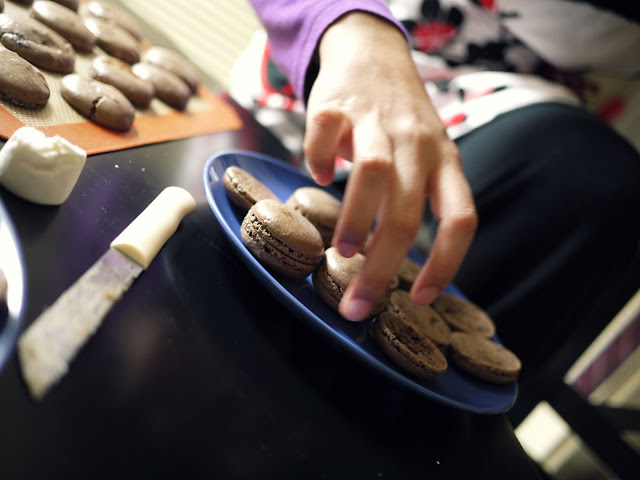 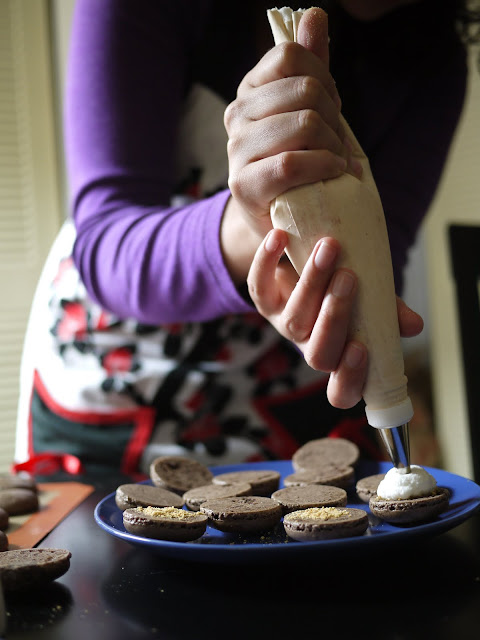 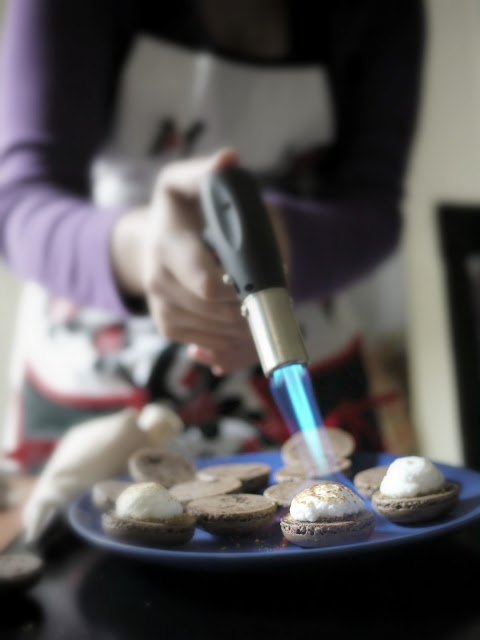 All in all, the macs tasted better without the blowtorch, since it made it a little too burnt for our taste. But it was still fun to do...


I didn't have marshmallows on hand so I made a marshmallow-like meringue (just whip egg whites and sugar till it's sticky and glossy) but if I made it again I'd probably stick to actual marshmallow fluff since it would save some time.


Truth be told, if I make this again I'll probably eat all the shells and forget about the filling altogether! But then again, I've never been a fan of s'mores. For those of you who are, this could be a fun play on them.


Whisk the 6 egg whites to a foam. Once frothy, add the granulated sugar in thirds, whipping well until it's dissolved. Whip for one more minute after the last of the sugar is in. Pour the melted chocolate over the whipped egg whites.
Using a spatula, roughly incorporate the chocolate and then immediately and delicately fold the sifted mixture of almonds, cocoa powder and powdered sugar into the meringue.
In a separate bowl, beat the remaining 1/2 egg white until just frothy.
Add it to the final mixture, folding gently to slightly loosen the batter.


Transfer mixture to the piping bag with a round tip and pipe out small rounds. Lightly tap the sheets when you're done to allow the macs to spread fully.


Preheat the oven to 280 degrees F. Allow the macs to sit uncovered for at least 10 minutes or till they look dried out. Bake for about 15 minutes... (the book says 300 degrees F but each oven varies).


Allow the macs to cool completely and then place half the shells upside down on the plate.


Filling
Use Marshmallow fluff or melted marshmallows (can be purchased in most stores)
OR
Whip 2 egg whites with half cup granulated sugar until it gets sticky and glossy.
Stir in about 3 tbs of graham cracker crumbs (add more to taste).


Pipe or spoon the filling into the shells and sandwich together.
Keep the macs in an airtight container in a fridge for 12 hours before tasting.