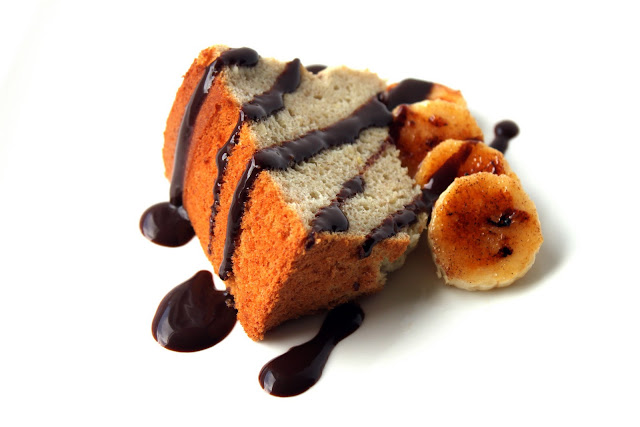 I have a fondness for chiffon cakes. They're just so light and fluffy, much lighter than their buttery counterparts. I even love the word... chiffon. They're moist, not too sweet, and include egg yolks (unlike Angel food cake) which keeps them sturdier and moister. It has a slight egg-y taste and if you don't know it by now, I have a major fondness for eggs. 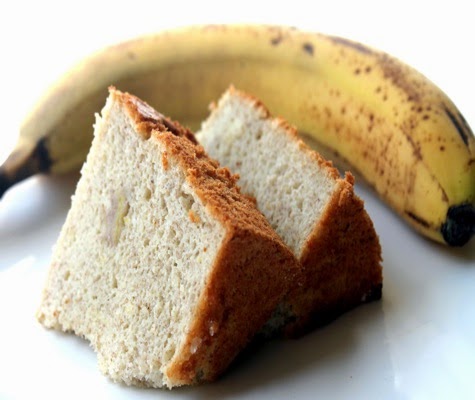 Chiffon cakes are made with vegetable oil instead of butter and all the fluffiness comes from beating the egg whites till they're stiff and then folding it into the rest of the ingredients. You can make many variations of this cake and I plan on trying many of them...

So have I sold you on chiffon cakes yet?

I experimented with a banana chiffon cake since I had overripe bananas... and it turned out just as I had hoped. I put in some cinnamon and added some caramelized bananas with a slice. I also tried it with chocolate sauce but it didn't add very much to the flavor. I'm tempted to enjoy another slice with some strawberries and perhaps some nutella....

*Note: this cake works best in an ungreased cake tin, something not non-stick.


Preheat the oven to 330 degrees F or 165 degrees C.
Process the bananas in a blender or food processor and make it into a paste.
Mix the egg yolks with the sugar, oil and milk and stir until smooth. Add in the salt, cinnamon, and cake flour.
Use an electric mixer and beat the egg whites, adding in the cream of tartar and the sugar. Beat until stiff peaks.
Fold the egg whites into the yolk batter, using a spatula and scraping around the side of the bowl and pushing the batter to the middle. Do this until it's fully incorporated but try not to over mix.
Pour the batter into your cake pan and bake for 50 - 55 minutes until a tester comes out clean.
When you remove it from the oven, turn the cake mold upside down immediately and let it cool completely before you attempt to take it out of it.


I made caramelized bananas by simply pouring some sugar on them and torching them with my blowtorch, but this cake really needs no add-ons.