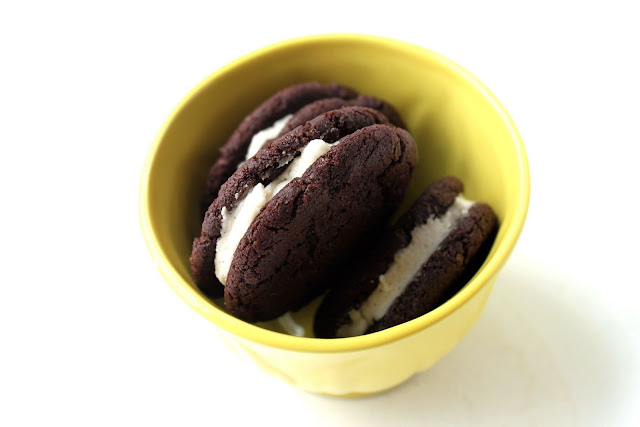 Between the move to St. Louis, friends visiting, and friends getting stranded, it's a wonder I found time to write this! My friend Patty Cakes just left for Atlanta (after her flight got canceled twice and she was stuck here with only one change of clothes). She's such a great friend! She came all the way here just to keep me company on the drive, and then hung out with me the last couple days. We had a great time wandering STL, although mostly just being couch potatoes watching TV and making delicious food...

So this post is a bit late but it's finally here! I made homemade oreos this Xmas and they turned out so tasty. I had been saving this recipe for 2 months now. They really do taste like real oreos, I promise. I like oreos, but I like chewier cookies more than crunchy ones. These are interesting because since they were homemade, I could reduce the cooking time and make them chewier, but then they could also be perceived as stale oreos, which don't sound very good at all.

I made these twice. The first batch were chewy and great, while the second batch turned out much crispier and spread a lot more than I expected. I think I may not have evenly distributed the baking soda in the first batch since they hardly spread at all. I preferred that one. I don't even know if I need to put baking soda in it at all.

Just keep in mind that they do spread, so to make the balls of dough small and keep them far apart from each other.

Also, the frosting is heavenly. I was alarmed by the use of shortening in this, since I've banned shortening in all my cooking. But reading the reviews, shortening appeared to be necessary to get the consistency of the oreo filling. So I went for the organic vegetable shortening that didn't seem as bad.

It's definitely a sweet filling, but the cookies are so unsweet, and more on the salty side, so it's a match made in heaven.

Once you make these, they're going to be frequently requested. The original poster warned of this and she was right :)
Labels: cookies