Snickerdoodle Cake and a Birthday Surprise 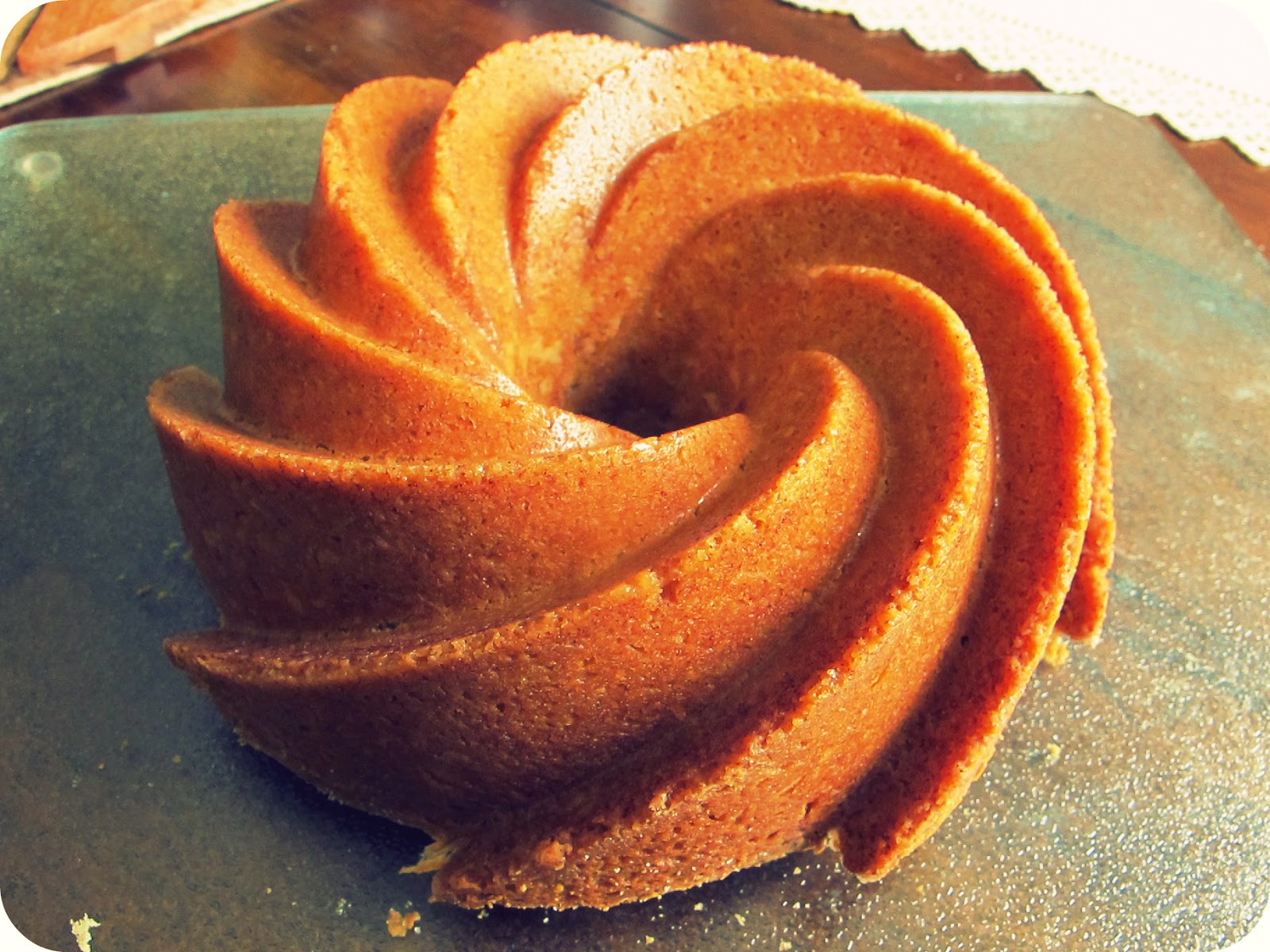 My two bee-eff-effs, J and Zebo got me the best birthday gift ever! I couldn't for the life of me figure what it was when they handed me a lovely box with pineapples all over the wrapping paper.

But then halfway through opening the box, I jumped back, screamed, and pointed "OMG I THINK I KNOW!!!!"

Anyway, after I stopped being dramatic, and after we made adequate fun of Zebo for randomly pointing out that the box it was in... was a box, I opened it! And it was awesome. 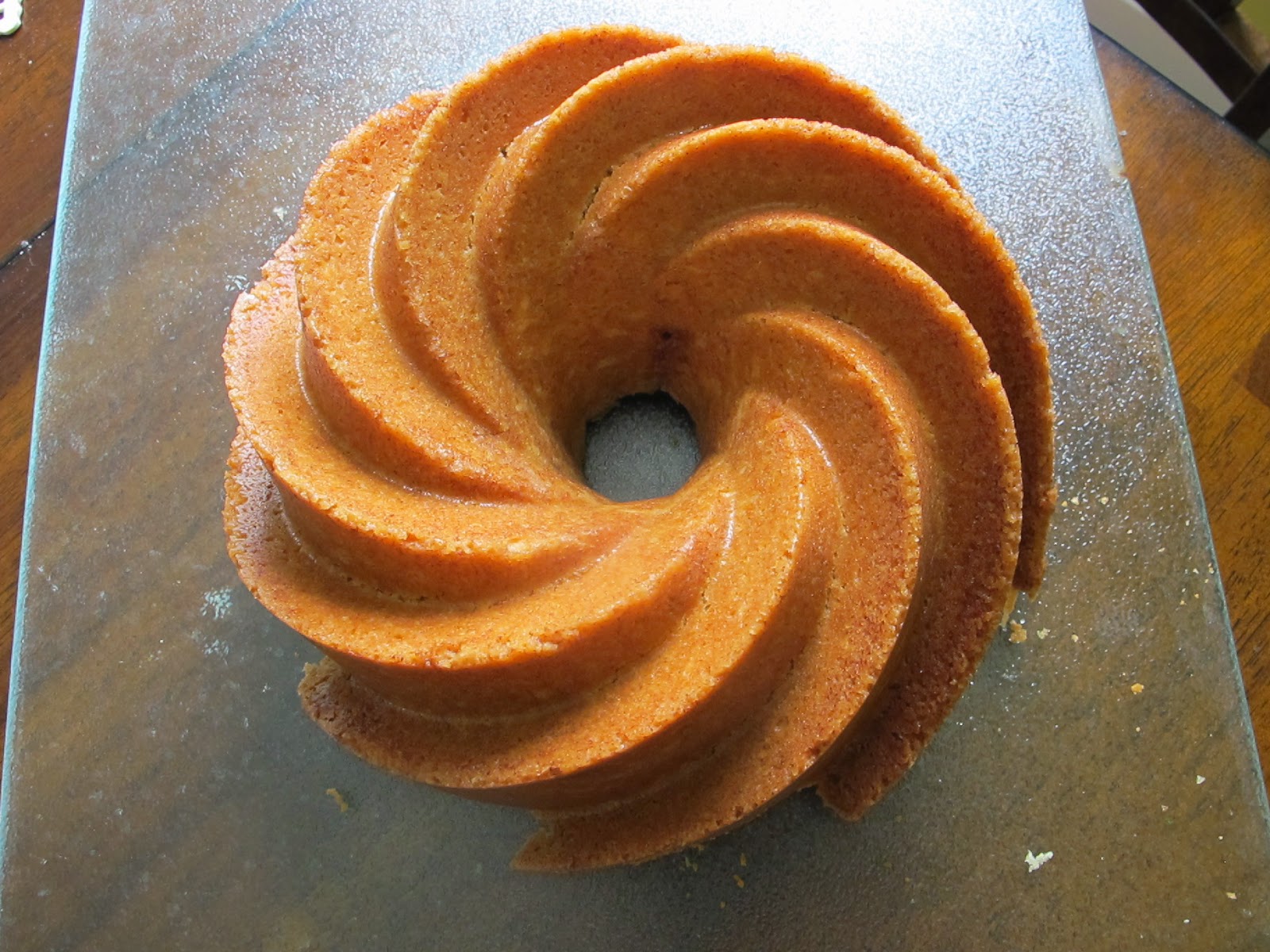 I'd been admiring this pan

from afar for months! It's a limited edition, excellent material that lasts forever, and super gorgeous. I've never liked any bundt pans except this one. So I was holding out for it. I really had no idea I would ever get it as a gift! Thanks guys :)
So to thank them, I made a Snickerdoodle cake! When I told HLi, this set him off on a rant that the name doesn't tell you what kind of flavor it is, and how that's completely pointless and dumb. So I tried to look up the name but no one really knows. I suppose it's just a cinnamon cake, but that sounds boring. So deal with it, HLi! It's a Snickerdoodle.

They're mostly made in the form of a cookie. I've never had one but a cinnamon sugar cookies sounds delicious. J doesn't have a sweet tooth and Zebo does, so I figured something cinnamon-y was a good balance for the two of them. The cake ended up being easy to put together, and I'm glad it was my first adventure with the pan!

I packed some for J, some for Zebo, some for my family, and a chunk for Debby, Joe's little sister. 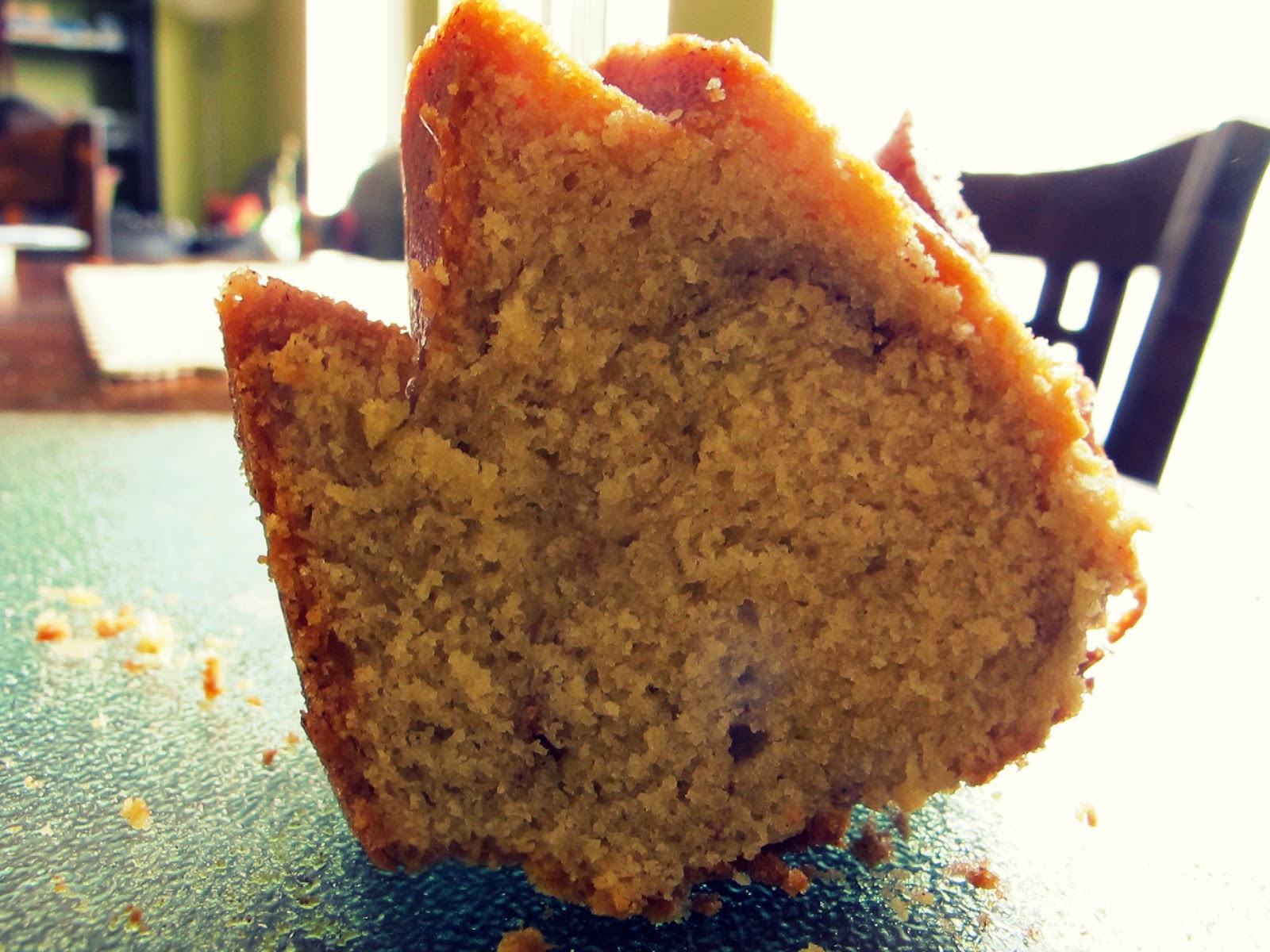 You can see a faint line of cinnamon sugar!

The only downside to the cake was that I don't think I sprinkled enough cinnamon sugar... I had at least a 1/4 cup of my mix left over... oops. I don't think it tastes as cinnamon-y as it should, but the texture is amazing. It's soft and moist and a cross between a pound and sponge cake, with a hint of cinnamon. I highly recommend making this if you own a bundt pan!

Snickerdoodle Cake
From My Baking Addiction

2 teaspoons ground cinnamon1 cup white sugar
2 1/2 cups all-purpose flour1 teaspoon baking powder1/2 teaspoon baking soda1/2 teaspoon Kosher salt1 cup unsalted butter, at room temperature1 cup white sugar1 cup light brown sugar3 eggs, at room temperature2 teaspoon vanilla extract1 cup full-fat sour cream, at room temperature
In a small bowl, combine 1 cup of sugar and 2 teaspoons of cinnamon.
Mix together really well and preheat oven to 325F.
Using a spray product like Pam, generously spray a 9 inch Bundt pan, being careful to cover all the nooks and crannies, as well as the center tube. (Note: If you don’t want to use Pam with Flour, you can just grease the pan with shortening.) Gently dust the entire inside of the pan with the sugar and cinnamon mixture. You should only need about 1/4 to 1/2 cup of sugar, but you want to try and evenly coat the inside surface of the pan, including the tube. Save the remaining sugar and cinnamon mixture and set everything aside.
Sift together the flour, baking powder, baking soda and salt. Set aside.
Beat just the butter on medium speed for one full minute. Add the white sugar and mix for 3 minutes, until light and fluffy. Scrape down the bowl and blade and add the brown sugar.
Mix for 2 minutes until the mixture looks light brown and uniform in color. Add the eggs one at a time, beating each for 1 full minute. Stir in the vanilla. Add the flour mixture alternately with the sour cream; beat well.
Spread half of the batter into the prepared pan. Sprinkle with 1/4 to 1/3 of a cup of the cinnamon sugar mixture over top the cake. Spread the rest of the batter into the pan and sprinkle any remaining sugar mixture over the top. (If you run out of cinnamon sugar, you can mix just 1/4 cup of sugar + 1/2 teaspoon of cinnamon together for the top of the cake. It should be more than enough.)
Bake in the preheated oven for 55 to 65 minutes, or until a toothpick inserted into the cake comes out clean. Allow to cool for 10 minutes before inverting onto a wire rack to cool completely before eating.
Labels: brunch bundt cake cake cinnamon Snickerdoodle