Mini Vanilla Bites with a kiss of Chocolate 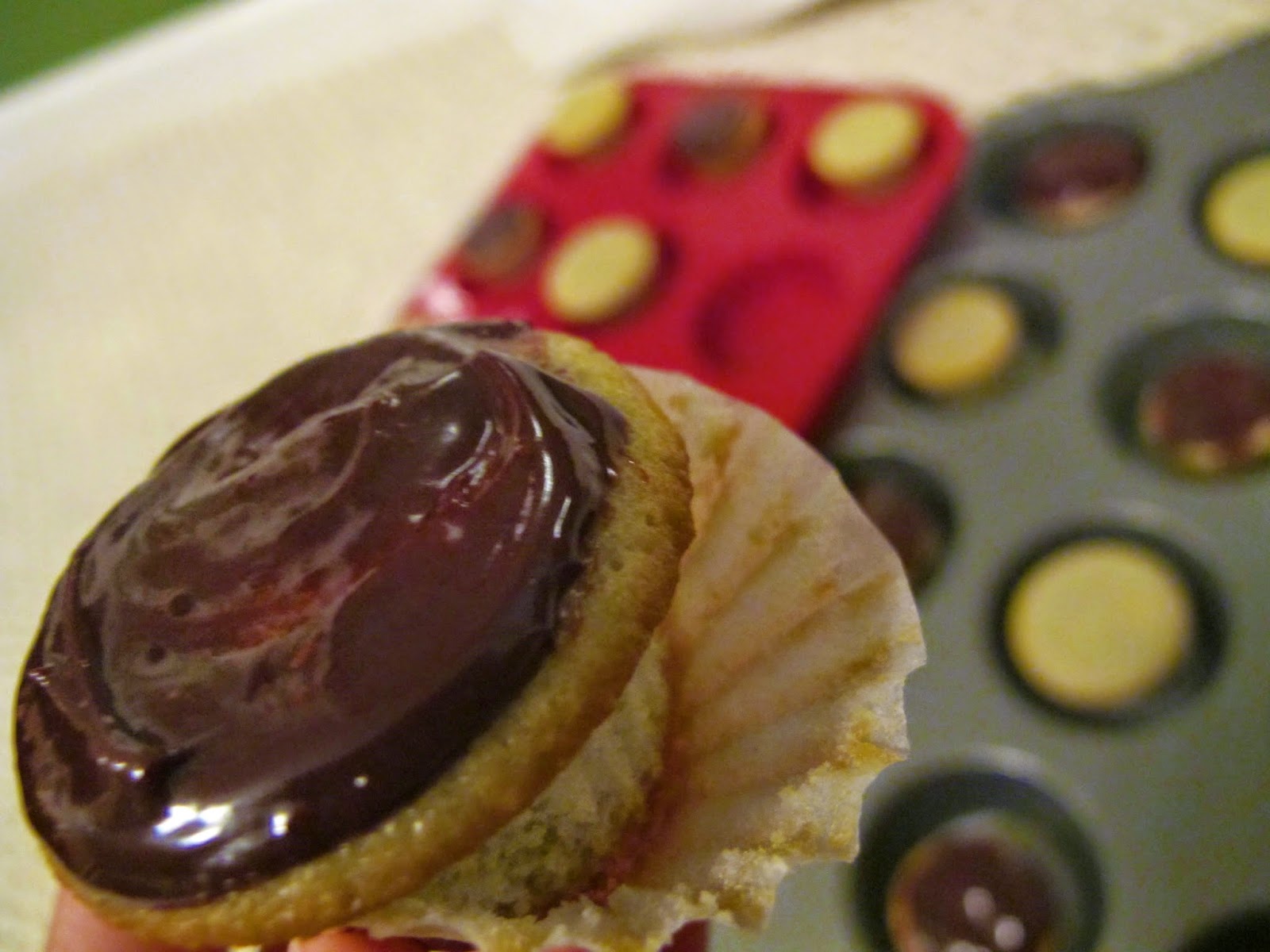 After three days of failed macaron attempts, I decided to give it a rest. I'm improving slowly but surely; I've memorized the recipe now and wasted a ton of eggs in the process, but currently the hard part is figuring out my oven temps!

I read David Leibowitz's blog and how he made 7 batches in one night before he got them right. Now THAT is dedication!

I have left my egg whites out so we'll see this weekend! I will conquer French macarons. I will.

Anyway, my mom is having a small get-together tomorrow night since she just bought a new condo in Buckhead Atlanta. It's just finger foods but I thought I'd contribute something.

I realize that baking is very comfortable for me. The more I do it, the more I enjoy it. Macarons are stressful but in a strangely good way. I love being in the kitchen and working on creating something delicious and that other people will enjoy. Last night I was a bit cranky over my cracked macarons and resolved to take a break tonight, but then the thought of not doing anything at all seemed a bit sad. I do need a lot more practice before any of my desserts are good as gifts!

So I opted to make lavender cream cupcakes.. but when I got home I realized I had lent my muffin pan to my sister! Aii-yaa!

Luckily, I had just bought a mini-muffin pan so I made the cupcakes in that. It was only after I started working on the lavender cream (which tasted delicious by the way) that I realized this would not work. The recipe called for scooping out part of the cupcake and filling it with cream (a great idea by the way!) but as a frosting, it was way too creamy and drippy.

I consulted my best friend J about this and we agreed that this was simply not going to work. If I wanted to do a lavender cream cheese frosting, I'd have to find dried lavender flowers and all I had were tea leaves. Sigh.

So in the end, I had to kick my lavender cream to the curb and go for a simple chocolate ganache instead, it's all I had on hand! I would have loved to do a vanilla buttercream frosting just to experiment with colors and my new frosting tips but I thought the cupcake might get boring since it was already vanilla.

But I do have to say this: the vanilla cupcakes I made were the best I've ever had. And I'm not bragging, because this isn't my recipe at all, it's from Chockylit.
I absolutely love her blog and her cupcakes; her pictures are perfection and her cupcakes divine!
I got the chai cupcake idea from her and this one too. Both have been huge hits. My mom couldn't stop raving about the vanilla cupcakes and couldn't believe how delicious they were. In fact, she insisted I don't put chocolate on it because it would ruin it. I thought they looked too bland and boring without chocolate so I only put them on half... But when I tasted one with chocolate and one without, she was right. The cupcake really is the perfect texture and consistency and you can taste a hint of salt with the sugar so it's not overly sweet.

Also, I liked that I beat the egg whites separately into soft peaks so that the batter was soft and almost meringue-like.. I tried dying the batter to a violet but I'm too frugal with my colors.. I was afraid of a scary purple so I did two drops of red and two of blue and nothing showed when it baked!

I did the same for the cream but alas, that did not work out.

In any case, the cupcakes are cute and delicious and next time I will hopefully frost them a bit prettier, and maybe even post about macarons...


**Edit: The cupcakes were a hit! people even thought they were store-bought, teehee.

Here's to the next one!