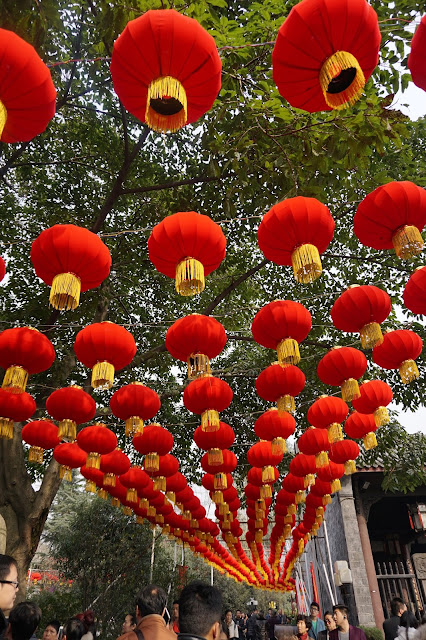 The first week of February is a distant, happy blur now. Joe and I spent 6 days in Chengdu, China, where he was born and raised until seven years of age. I had visited once before in 2009, when our relationship was still in that fresh honeymoon stage. It was a meandering, rambunctious affair then-- a five-week journey travelling across nearly a dozen cities with six college friends in a post-graduation celebration. I stayed briefly in Chengdu as part of the trip, but I was far more concerned with spending time with friends and my hunky boyfriend and less so with impressing his family. 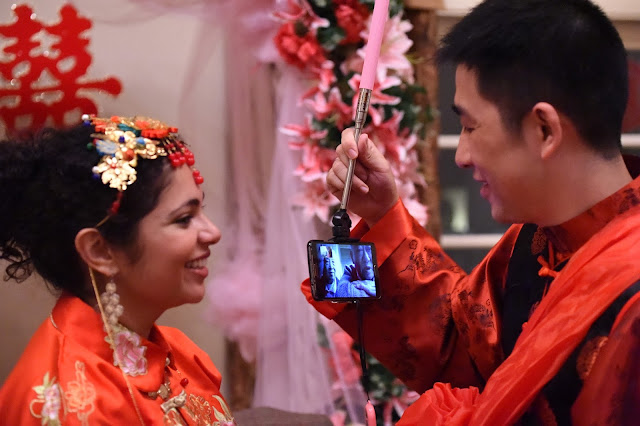 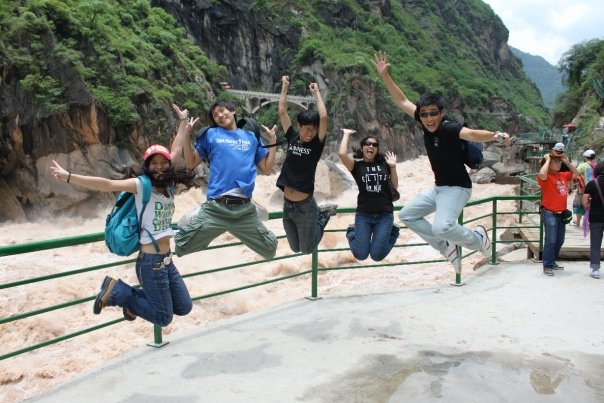 This time, though, I visited as his wife. Many of his family members were unable to make it to the wedding so it was a special occasion to meet my new family, and on Chinese New Year, no less. Often called the largest migration of people in the world, Chinese New Years is the Chinese version of our Christmas/New Years. There are firecrackers and fireworks every night for a week, cities empty out as everyone returns to their ancestral homes, and lots of little red envelopes filled with money are passed around for the young ones as gifts. The lazy week is spent  with family, watching a strange variety show put on in Beijing, and eating nonstop. 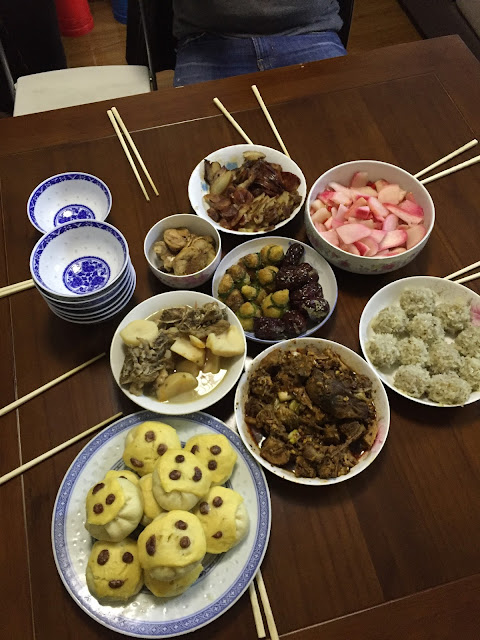 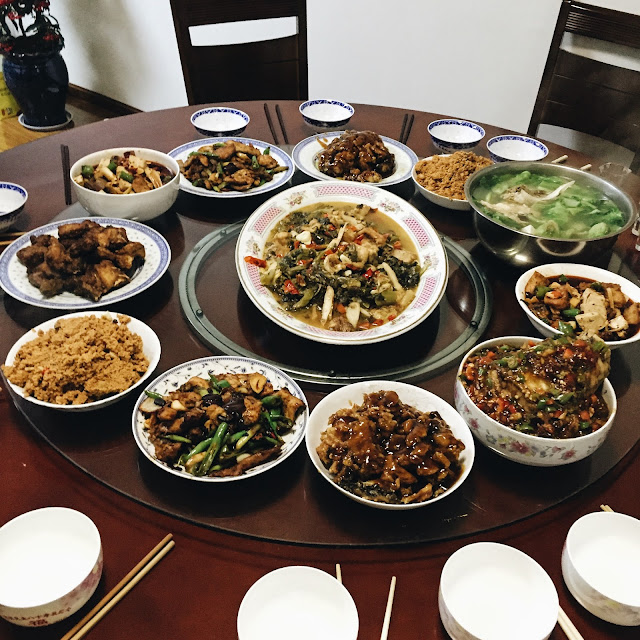 Oh, the dinners. We arrived at midnight, exhausted and bleary-eyed after a nearly 24 hour journey. As soon as we entered the house, closer to sunrise than sunset, we were welcomed by the entire family, wide awake and very excited. The table was cleared of Mahjong tiles and a dozen dishes were brought out, all made by his aunt, followed by several toasts of “bai jiu”, a 100 proof rice wine that leaves your chest on fire. 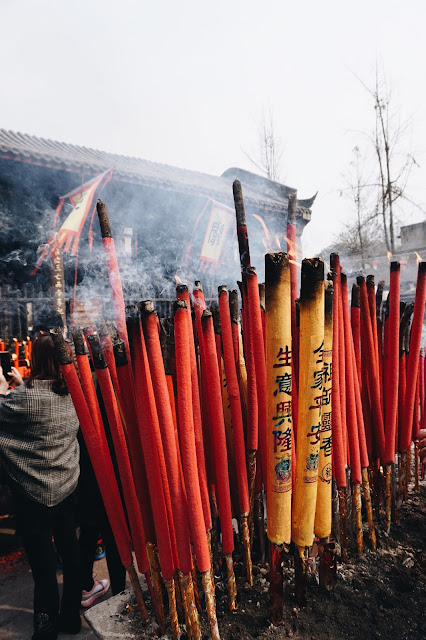 To say this week in China was bewildering and bemusing is an understatement. I hadn’t paid much attention to Chengdu or DrH’s family last time, and this time my meager Chinese vocabulary was no help at all. Turns out, there’s only so much you can respond to with “this is tasty”, “I don’t know”, “I’m leaving”, and basic greetings. I had no idea what anyone was saying, although I became a pretty good guesser through context—it helps that DrH’s family is very expressive and enthusiastic when they talk, a trait that drew me to him as well. 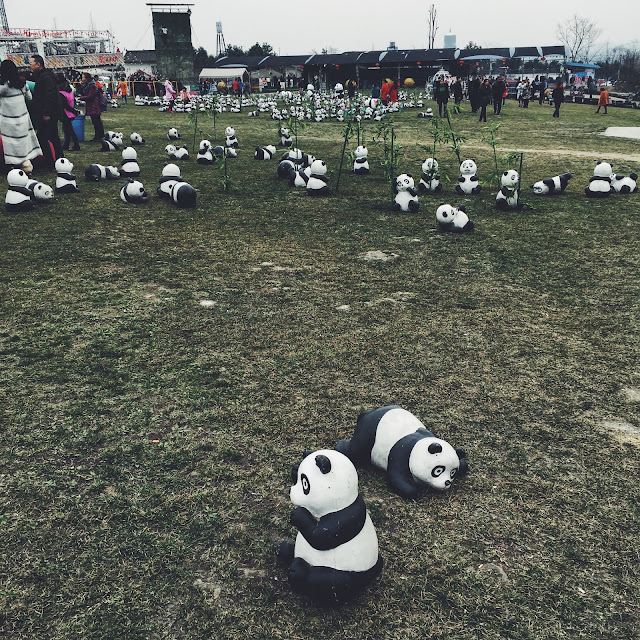 There were a lot of little bumps in the trip that drove us crazy—bathwater that alternated too hot or too cold every two minutes mid-shower, lack of central heating, dirty toilets in most outdoor places, all social media and Google services blocked—but that’s China. The last four decades of growth might have made it an economic giant, but in many ways, it still has a lot of catching up left. 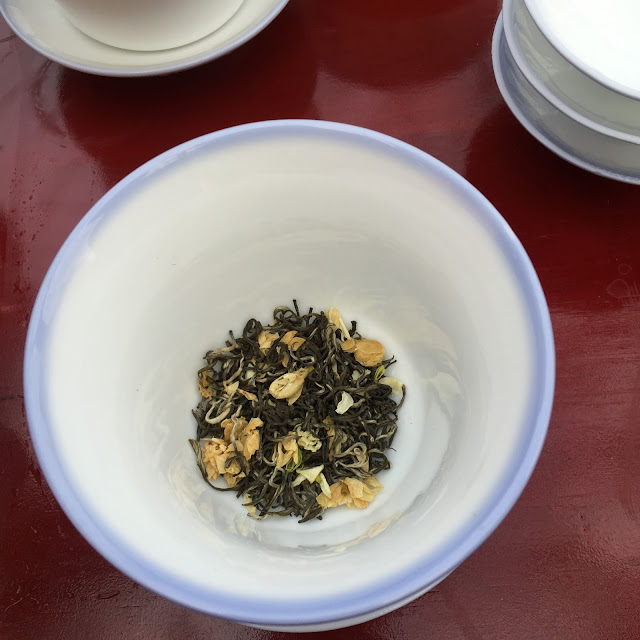 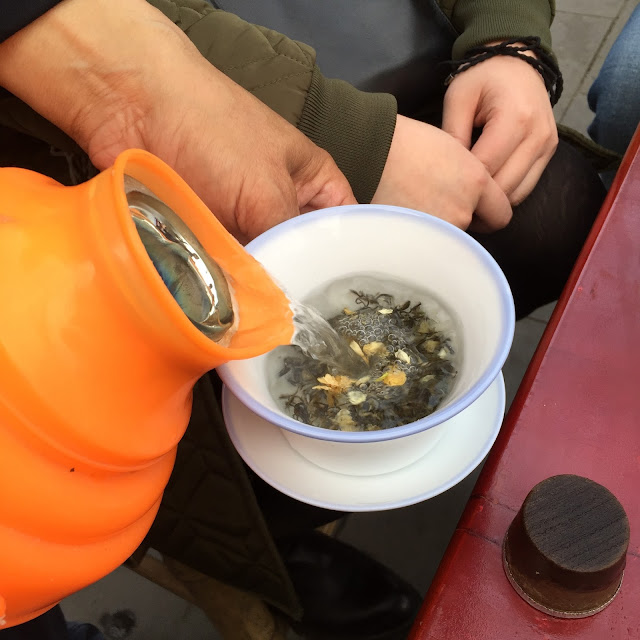 Despite not being able to communicate much with anyone, I felt overwhelmed by the love they had, not only for DrH but for me. Everyone was kind and loving and they did their best to not let me feel out of place. I am, by nature, a shy and reserved person even when I’m comfortable in the language, so you can imagine how I might have been. They worried over whether I could use chopsticks, and checked that I could eat all the meat they offered. They spoke highly of India and tried to relate to me as best they could. His grandmother gave me lots of hugs and always asked if I ate. 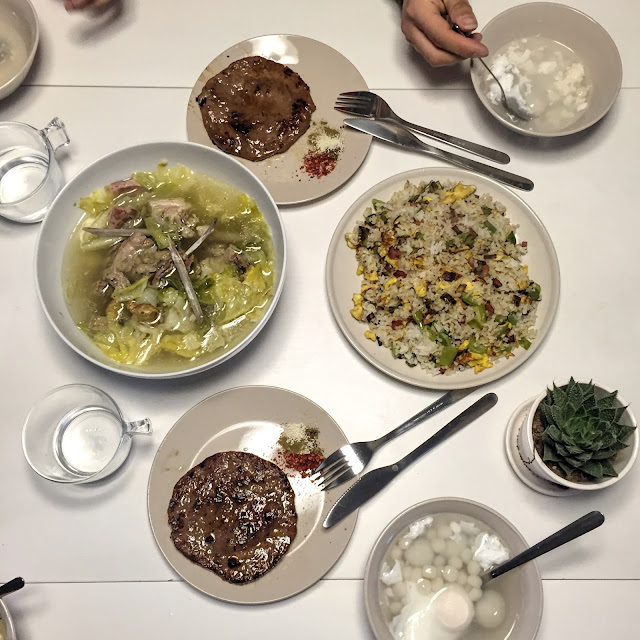 One thing I love about the Chinese—they love to eat. Instead of asking “how are you” as a greeting, it’s more common to say “have you eaten?” which is meant as a concern, because if you even hint that you haven’t or could be hungry, everyone will try to feed you everything they have. It’s something the Chinese share with the Indians and it is truly one of the best characteristics about us. We are generous with our food!
When I felt sick with a cold, his uncle insisted this little orange Chinese fruit that they called a “peepaw” similar in taste to a persimmon, would help my sore throat. He wanted me to eat them every day and everyone would push several of them towards me every morning in insistence until I had eaten at least five or six. At any given time, there were fresh fruits—lychees, apples, oranges—peeled and sliced and ready to eat. His grandmother would feed us every morning, first peepaws, then homemade buns, big round and soft with a meaty filling. His grandfather, hard of hearing, would come and ask if we were eating properly, pushing more food towards us, regardless of what we gestured or shouted into his ear.


Every dinner was an impressive feast and a way for everyone to mingle and reconnect after a long and lazy day, often involving a nice restaurant, sometimes even a private room, and of course, that classic glass Lazy Susan of multiple dishes that kept rotating with more and more delicious food. 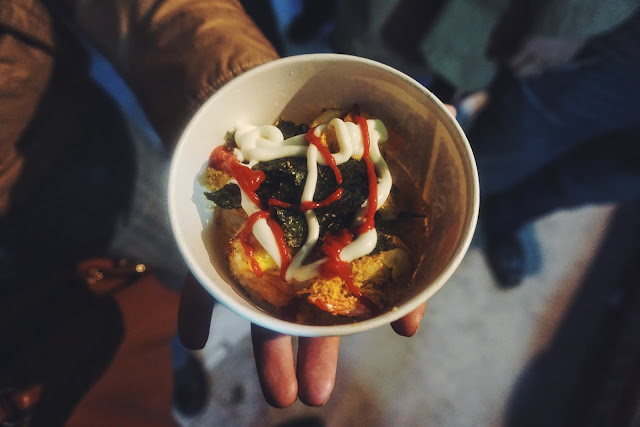 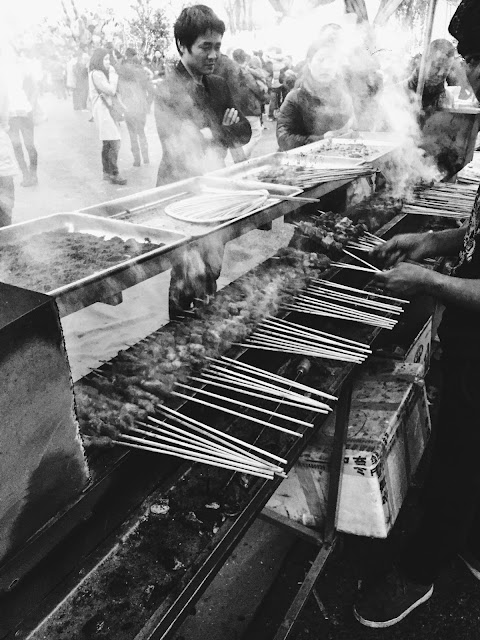 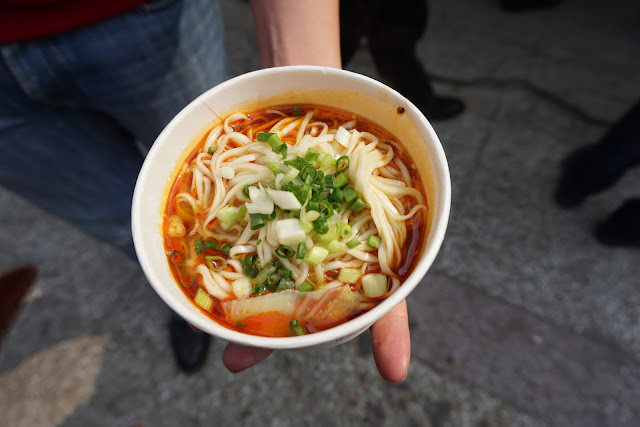 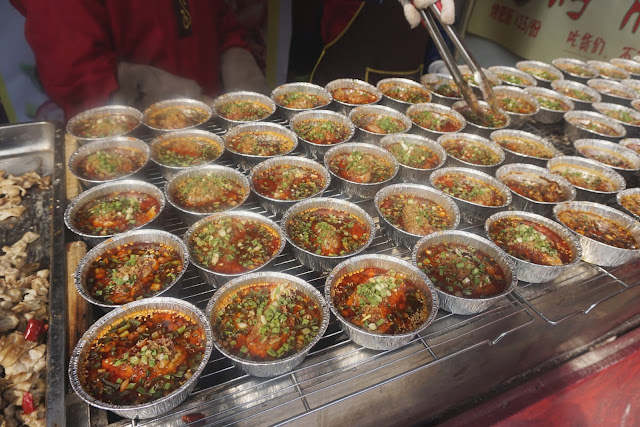 One day, I spied an enormous fish in their kitchen sink. That night, we had about 10 dishes on the table, and every dish utilized the fish in some way. Every dish was flavorful in its own way, accompanied with the freshest vegetables, gently sautéed. Our days were spent playing cards at a teahouse with DrH’s cousin and her boyfriend, grabbing all sorts of wonderful street food with his uncle (we accidentally ate some brain, rather delicious at first, but a little nauseating once I knew what it was), and traipsing around a huge mall with his grandparents, all of us indulging in ice cream because his grandma requested it.I heard some delightful stories by DrH’s family about him and what kind of a kid he was. Even though I couldn’t understand, they would eagerly want him to translate to me all his endearing quirks and it made me fall in love with him all over again. 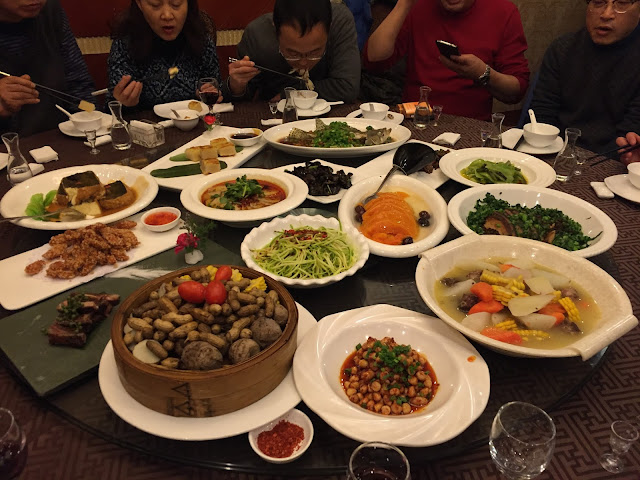 The last night was definitely the best. We were exhausted after a restless night of sleep due to a broken heater, and were looking forward to getting an early nights’ rest to wake up for an 8am flight. We had also asked his uncle to choose a fancy restaurant for us to buy everyone a meal and he arranged it early in the night so we could have enough time to pack. The night began with several fantastic courses of fancy dishes with all sorts of meats and vegetables. We toasted each family at the table at a time, throwing back shot after shot of the bai jiu. Halfway through the night, everyone was gloriously tipsy and having a great time. His uncle, a musical conductor, decided to belt out some Italian opera which turned into making everyone at the table perform in some way or another, which led to a silly game of Charades.
To cap it off, we all had a lovely slow stroll back to the house where his uncle played the piano and everyone sang and danced along for hours. It was the sweetest end to the week and every time Joe and I checked the clocks and shared a tired glance over his giggling relatives, we couldn’t help but smile at how happy they were and how much we shared with them, despite all the decades of separation and the gulf of speaking a different language. We ended up getting very little sleep that night but it was well worth it. 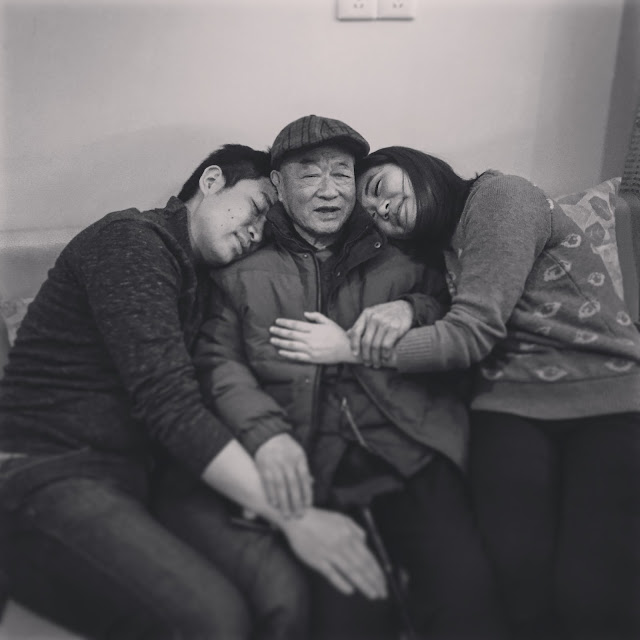 That week made me realize how fortunate I am to be a part of a funny and fun family and how warm and welcoming they were when they didn’t necessarily have to be. Ultimately, it was a perplexing week willed with dichotomies. Firecrackers every night and huge crowds at the temple, but giant malls and shops abandoned by their workers. Fancy cars and highrises with marble lobbies that have dark, jittery elevators leading to units without central heating and water pressure. A family that can’t speak a word to me in my native tongue, yet manages to convey a deep and open love. That is China to me—baffling, clangorous, and inexplicably wonderful.
Labels: chinese food chinese new year travel