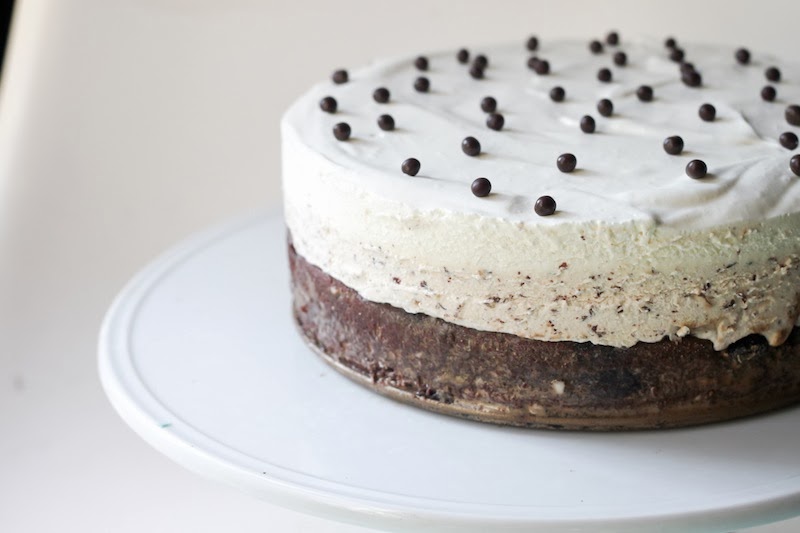 "If you're between the ages of 8 and 16 and you are not a whiskey, you are annoying."
-Anonymous

That quote made me laugh, even though I don't actually drink whiskey. Joe has been slowly acquiring a taste for it and so I've been learning about the different brands. I still can't get into drinking alcohol much, although I'm finally starting to appreciate a good Malbec... 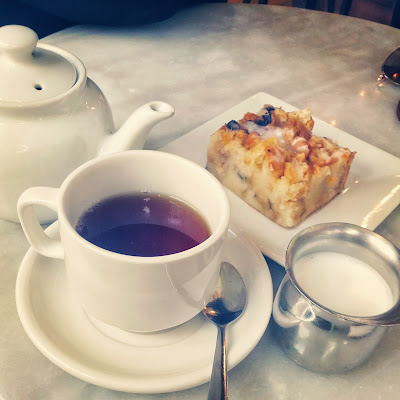 Age is a funny thing. When I was about fourteen, I remember taking a quiz with friends to see "How Old You Really Are"... and I got twenty-three. At the time, I was like what?! Twenty-three, that's older than my sister, NOOOOoooooo!
But I think, deep down, I've always known that I'm bit of an old soul. That's not to say I didn't enjoy my high school and college days. I had a lot of fun, even though I was a bit cautious and never too crazy.

The strange part is, the older I've gotten, the more I still feel about fifteen years old in my head. I don't feel like I've changed that much, although I know I must have. I mean, I lust after kitchen appliances and oven ranges like no one else... I also look forward to going to Home Depot because it means I get to improve on my apartment, and there was a time I believed it was the worst place ever.

This past week, Joe was asked to housesit and check on his attending's two children who are fourteen and seventeen. We cooked a meal with them one of the nights and Joe made a joke about "shaking it like a salt shaker" (at the time, we were literally trying to get salt out of the shaker) and neither of them picked up on the reference. This made me feel super old. And it made me realize that they probably don't think we're cool at all. But then I remembered that no one at fourteen is cool, so it's all good.

Not to say I'm complaining about feeling old. Being an adult is pretty awesome--having the freedom to eat my meals whenever and however I want or being able to stay out late on a week night is one of many perks. There are a lot more responsibilities but I'm glad, because I know I can handle them. I relish waking up early with a cuppa tea, eating nutritious foods, taking care of myself, and being a dog mom.

The great thing about life is that you don't have to choose between "safe/boring" or "risky/adventurous". You can have both in varying doses, as long as you're willing to deal with the consequences that follow, which is really just part of being an adult anyway (and something many seem to try to avoid).

I just have to make sure I don't speed through adulthood and cross into cranky senior citizen mode too quickly... I don't do too well with change, especially technology-related ones, just ask Joe (or don't).

Of course, my favorite part of being an adult is earning and spending my own money. I love that I am able to buy real gifts for my friends and family.
Speaking of, Joe and I are working on a secret project at the moment which I can't speak about until December! This weekend was a lot of fun because it was great to work with our hands for a while. We're so excited to share it but patience is a virtue, I suppose (grr).

Anyway, last week, it was a friend's birthday and she loves anything coffee-flavored, so my plan was to make an ice cream cake with coffee ice cream. I tried a no-churn ice cream and things looked promising... until after six hours of freezing, I opened the side of the springform pan and all the ice cream came gushing out in a soupy mess, all over my kitchen counter, onto the floor, onto my toes.

It reminded me of when I was about fourteen, I was engrossed in a TV show and shaking a ketchup bottle rather carelessly. Before I knew it, the top flew off, and bright, goopy red paste was flung backwards all over the wall and carpet of my mom's living room. I remember being close to tears, scrubbing as hard as I could with anything I could think of. Thank goodness for the internet back then! I think I did end up getting everything out without her even noticing (I believe the key tip there is dish soap). 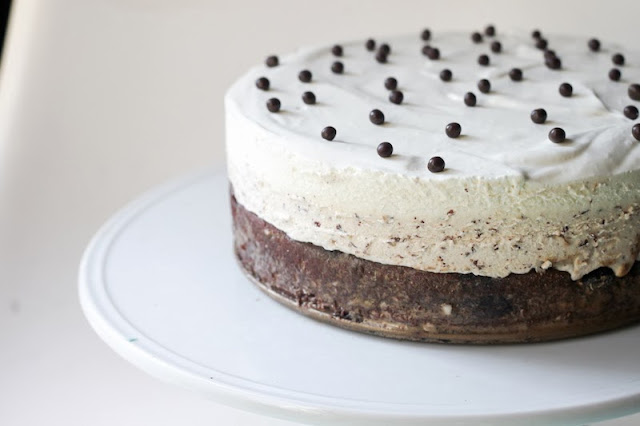 This time, I wasn't so much as close to tears out of fear of getting into trouble, but rather frustration over wasted time and ingredients. Regardless, I cleaned everything up, took a shower, and started over.

On my second try, I went for a tiramisu ice cream. I've made it before on the blog, and it's delicious. I hadn't made it in so long, but I had mascarpone in my fridge already, so t'was fate. I used the same brownie base, and a no-churn ice cream on top that I knew would hold. Still made it on time for the party and the cake was a hit!

The brownie layer is rich, chocolatey and intense. The tiramisu ice cream is very creamy and very reminiscent of real tiramisu, just frozen. The whipped cream on top was delightfully light and airy, and I topped it all with some dark chocolate crisps.

The whole thing is rather rich and heavy, so a small slice is enough, although I saw a few people reaching for a second.

I know it's getting all cold and it's officially fall now, but ice cream cake is always welcome. Especially one that's tiramisu-flavored, right?

Listening to: Buzzcut Season by Lorde

Chocolate-Coffee Ice Cream Cake
Adapted from a recipe from Food 52
Makes 1 8-inch cake
For the brownie layer:
6 Tbsp. unsalted butter, cubed
8 oz. bittersweet chocolate, chopped
1 cup sugar
3 eggs
1 tsp. vanilla
1/2 tsp espresso powder
1/3 cup flour
For the chocolate-coffee ice cream:
2 cups mascarpone
½ cup heavy whipping cream
½ cup 2 percent milk
2/3 cup sugar
Pinch of salt
¼ cup Kahlua
Pinch of espresso powder
3 Tbsp. brandy or dark rum
3 oz. high-quality dark chocolate, melted
For the no-churn ice cream:
1 cup heavy cream
7 oz. condensed milk
2 Tbsp. bourbon
Pinch of salt
Brownie Layer
Preheat oven to 350 degrees. Grease an 8-inch springform pan.
Melt the butter in a saucepan. Remove melted butter from the heat and add the chopped chocolate. Stir until the chocolate is melted and let cool.
Using a hand mixer or stand mixer, beat together the sugar, eggs and vanilla on high until pale. Whisk in the chocolate and butter.
Gently stir in the flour and espresso powder until just combined and no white streaks are visible.
Pour into pan and bake for 24 to 28 minutes or until a toothpick inserted into the center looks clean or with crumbs attached (not wet).
Let cool completely.
Tiramisu Ice Cream
Place all the ingredients except the chocolate, in a blender or food processor and pulse until combined and smooth.
Chill in the refrigerator until cold, about 1 hour.
Add the ice cream base in your ice cream maker and churn according to the manufacturer’s instructions.
While this ice cream maker churns, pour in the melted chocolate. The chocolate will harden and break into little pieces in the process.
When the ice cream maker is finished, break up any remaining large pieces of chocolate with a spatula.
Store in an air-tight container in the freezer until ready to use, or if your cake is ready, go ahead and spread it onto the brownie, using a spatula to smoothen it out.
The ice cream should be soft enough to spread easily when assembling the cake.
No-churn Ice Cream
Beat the heavy cream until stiff peaks form.
Gently fold in the other ingredients until combined.
Store in an air-tight container in the freezer until ready to use.
The ice cream should be soft enough to spread easily when assembling the cake.
Ice Cream Cake
Once the brownie is cool, spread the ice cream evenly over the top, stopping ¼- to ½-inch from the top edge of the springform pan.
Store any leftover tiramisu ice cream in the freezer (you will have some extra, depending on the size of the layer you'd like to have)
Place the pan in the freezer about 2 hours until ice cream hardens.
Spread no-churn ice cream on top of the chocolate-coffee ice cream.
Place back in freezer for 1 hour to harden.
Decorate with chocolate shavings, sprinkles, chocolate sauce or cocoa nibs, if desired, and serve.
Labels: brownie cake coffee ice cream tiramisu