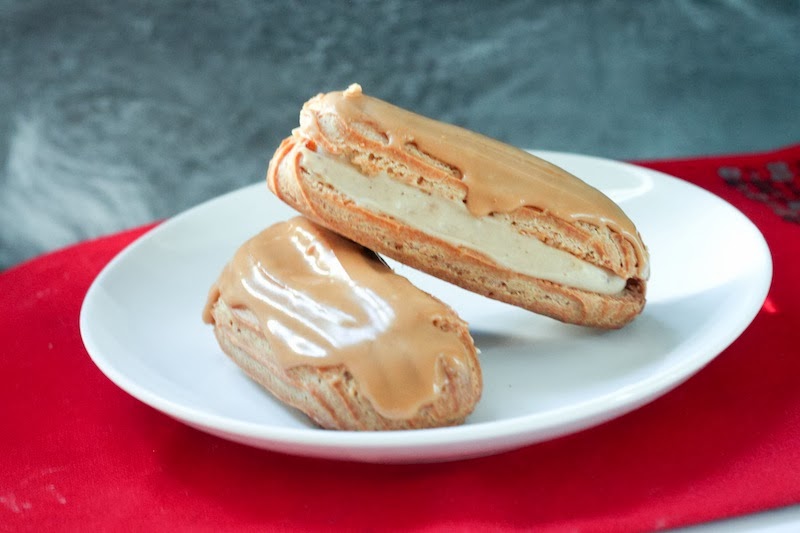 So... you probably won't see many pumpkin recipes on my blog. I did make a pumpkin risotto I enjoyed very much. But I don't get the pumpkin hype. I just don't. I'm sorry! I didn't grow up on pumpkin pie and it doesn't do much for me. Pumpkin desserts seem to just be a vehicle for warm "fall" spices, and those just don't need a vehicle. I'll just put those spices on any and everything--thanks but no thanks, pumpkin!
But hey, can my love for apples make up for my disdain of pumpkins?


I'm still slow on the whole cooked fruit thing, but I do love me some apples. Growing up where I did, cooked apple desserts weren't really a thing. But when I was perusing the King Arthur website several months ago, I happened upon some boiled cider concentrate that had great reviews. I thought it'd be great for apple cider macarons, and they were. But I was only using small amounts at a time and needed to use it up fairly quickly.
Now, with some research, I've discovered you can actually boil down apple cider yourself and make your own concentrate, which is pretty awesome (recipe below). That's what I'll be doing next time, and that's what I recommend you do.

I wanted to make something unique, something no one had really done before. That's kind of hard to do in an age of a zillion food blogs that have pretty much covered most dessert combinations at this point. But then I thought of eclairs--a simple French choux pastry. It's light and airy, ready to absorb any flavors you want to fill it with.

I made an apple cider mousseline cream which sounds a lot fancier than it is. It's soft and super-fluffy. This cream would work as fillings or frostings (might be a little too soft for a frosting?) for cake/cupcakes.
I filled each eclair with the cream, and then spread a caramel glaze on top of each. These went to Joe's lab team for a meeting, and one went to my friend Kaylen, who loves apple things. They were much tastier than I expected, and people devoured them.
The filling can make the pastry soggy fairly soon so it's best to consume them the same day.

I know it seems like there are a lot of components but it's relatively easy to put them all together, and it's definitely a unique spin on a fall dessert.
How can you resist a classic French pastry combined with classic American flavors?

Listen while you bake: Ecou by Elena Gheorghe (Romanian)

Apple Cider Éclairs
Adapted from Bouchon Bakery
8 to 12 Servings (depending on size)
For the pastry shells:
1¼ (175 g.) cups all-purpose flour
2 Tbsp. (30 g.) granulated sugar
8 Tbsp. (1 stick) butter, room temperature
¾ tsp. salt
5 (about 1 cup) eggs
For the apple cider filling:
1½ cups plus 2 Tbsp. whole milk
8 Tbsp. (1 stick) butter, divided
3 egg yolks
½ cup plus 2 Tbsp. (120 g.) granulated sugar
¼ cup (35 g.) cornstarch
¼ cup (2 oz.) boiled apple cider, plus more to taste (Recipe follows.)
For the caramel glaze:
3 Tbsp. salted caramel sauce (optional)
¼ cup boiled apple cider
1 cup powdered sugar
Pinch of cinnamon
Pastry shells:
Combine the flour and sugar in a small bowl. Set aside.
In a saucepan, bring 1 cup water, butter and salt to a simmer until the butter has melted.
Remove from heat and add in the flour and sugar mixture, whisking constantly until it comes together as a batter.
Add the eggs 1 at a time, whisking constantly until mixed. Store in the fridge until chilled.
Preheat oven to 375 degrees. Line a baking sheet with parchment paper.
Transfer the chilled dough to a pastry bag and attach a star tip. Pipe the batter onto the parchment paper in 5- to 6-inch strips, leaving a curled tip at the end of each éclair. Wet your finger and gently press down those tips so they don’t stick out.
Place the baking sheet in the oven and immediately lower the temperature to 350 degrees.
Bake for 40 minutes, rotating the pan halfway through.
Lower the temperature to 325 degrees and bake another 20 minutes, until golden brown.
Lower the temperature to 300 degrees and bake 10 more minutes, until the éclairs feel light (To check, break one open and check the inside – it should be completely cooked).
Let cool completely before filling or freezing.
Apple cider filling:
In a saucepan, bring the milk to a simmer.
In a large bowl, whisk the egg yolks and sugar until slightly pale. Add the cornstarch and whisk 1/3 of the hot milk into the mixture, until combined. Add the mixture to the saucepan.
Bring to a boil over medium heat while whisking, making sure not to cook the yolks, until slightly thickened. Remove from heat and let cool 10 minutes
Incorporate half the butter. Pour the mixture into a baking dish, cover with plastic wrap, and let cool.
Once the filling reaches room temperature, transfer it to the bowl of a stand mixer and beat until smooth. Beat in the boiled apple cider and the remaining butter.
Cover with plastic wrap and refrigerate for at least 1 hour.
Caramel glaze:
In a medium bowl, stir 1/3 cup water, salted caramel sauce, boiled apple cider, powdered sugar and cinnamon until combined. Add more water if mixture is too thick; add more powdered sugar if it’s thin. It should spread easily and harden quickly.
Assembling éclairs:
Cut the éclair shells in half lengthwise/horizontally.
Fill a piping bag with the apple filling and attach a round tip. Pipe a layer of filling onto the bottom halves of the pastry shells. Sandwich the filling with the top halves.
Spoon the glaze over the tops of the éclairs and let harden.
Eat immediately or store chilled in the fridge for 1 day.
The shells, filling and glazes can be kept chilled or frozen 1 to 2 weeks.
Boiled Apple Cider
Make boiled apple cider (also called apple molasses) by placing about 4 cups apple cider in a large saucepan and a cinnamon stick, star anise or both. Bring to a boil, then reduce heat to medium-low and let simmer, stirring occasionally, for 4 to 5 hours, until it is reduced to a thick syrup. Store covered in the refrigerator. Boiled apple cider also can be purchased online.