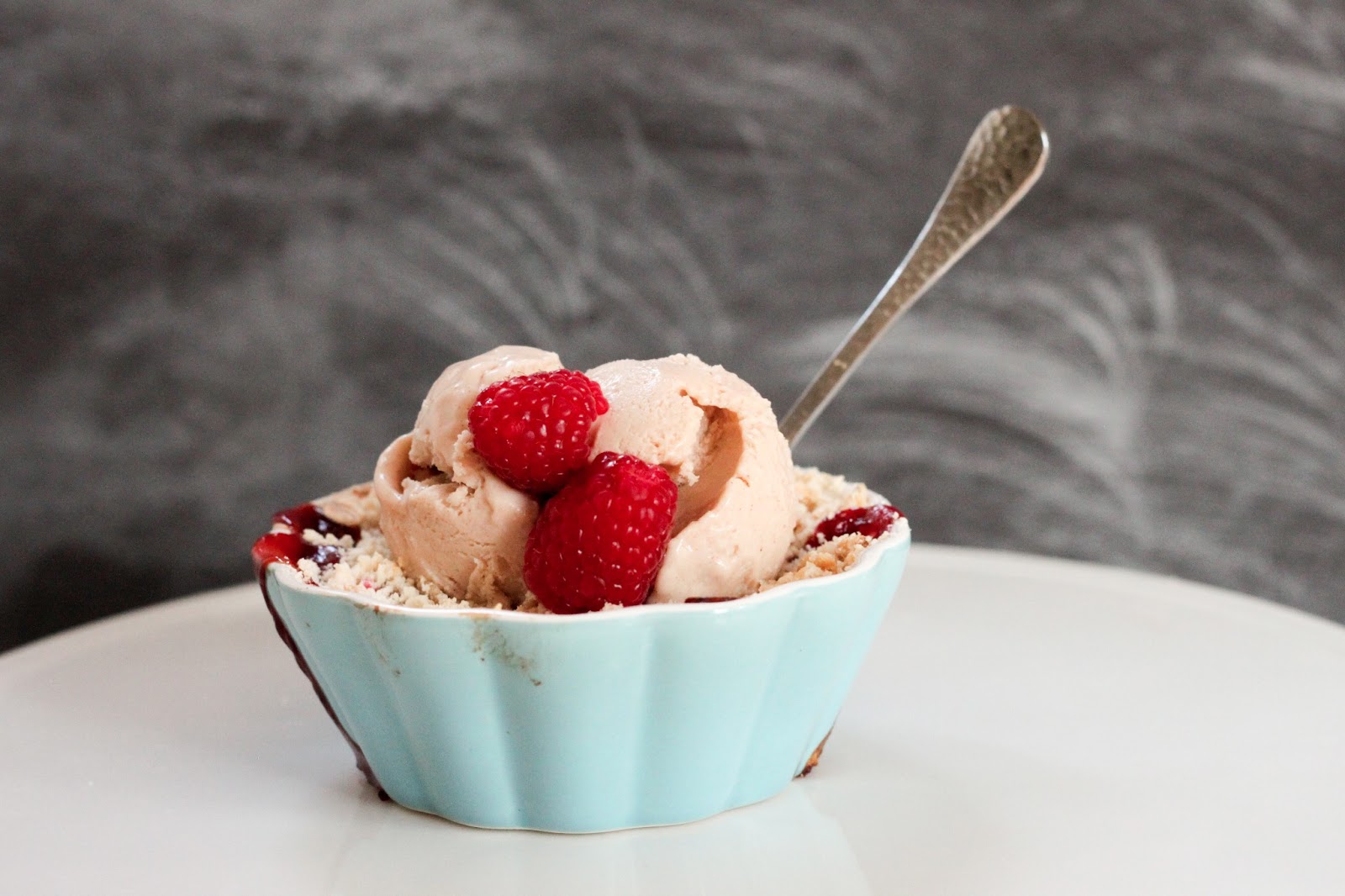 I held my first crepe party last weekend and it was delicious. I'll share details on the crepes in another post, but I made sweet and savory ones and just kept out a bunch of fillings so everyone could make their own.
I did warn everyone amply that I still made dessert. I knew I didn't have to, but quite honestly, I'd been looking forward to eating this after a whole year had passed.


Last summer, my friend Cate (who *sniffle* left me for Nashville) and I held a joint dinner party that was a huge success. We even made adorable invitations for our guests:

We themed it 'denim' because we had gone shopping together earlier in the month, split up as we walked in and showed up at the cashier thirty minutes later with the exact same denim top. It was fitting (the party themes and the shirts).

The dinner was amazing, with Cate and I dividing up the work evenly. There was a whole roast chicken, a fig and goat cheese tart, lots and lots of fresh veggies, lavender lemonade, and so much more.

For dessert, I made peach and raspberry crisps. It's a great dish to make for a dinner party that you're hosting (or if you're at a friend's place and they don't mind you using their oven, it's great to bring as well), because you can have it put together long before anyone gets there, and then put it in the oven halfway though dinner--it'll be ready by the time people are ready for dessert. 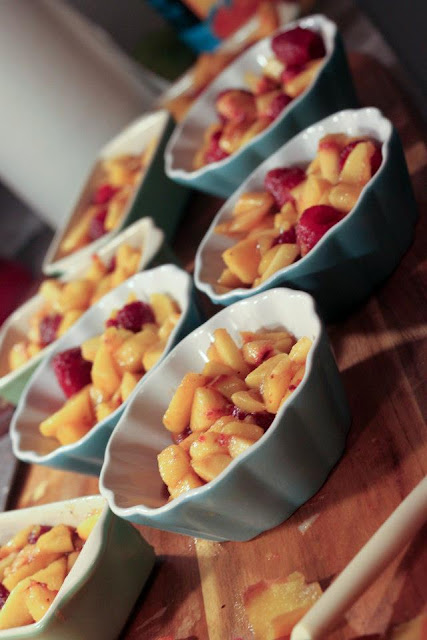 Despite spending 15 years in Georgia, I’ve never seen as many peaches as I have in St Louis. To be fair, I was neither a huge fan of peaches nor did I frequent local markets when I resided down South. But since moving to the Midwest, and basking in the abundance of farmers markets and local produce, I’ve been sampling many new fruits (read: rhubarb) and discovering my love for all sorts of new flavors. The first time I made this, I just randomly picked up some peaches from Soulard Farmer's market because they were so gorgeous and plentiful, I just couldn't resist. And of course, I already had raspberries at home. (Come summertime, my kitchen is never without raspberries.) 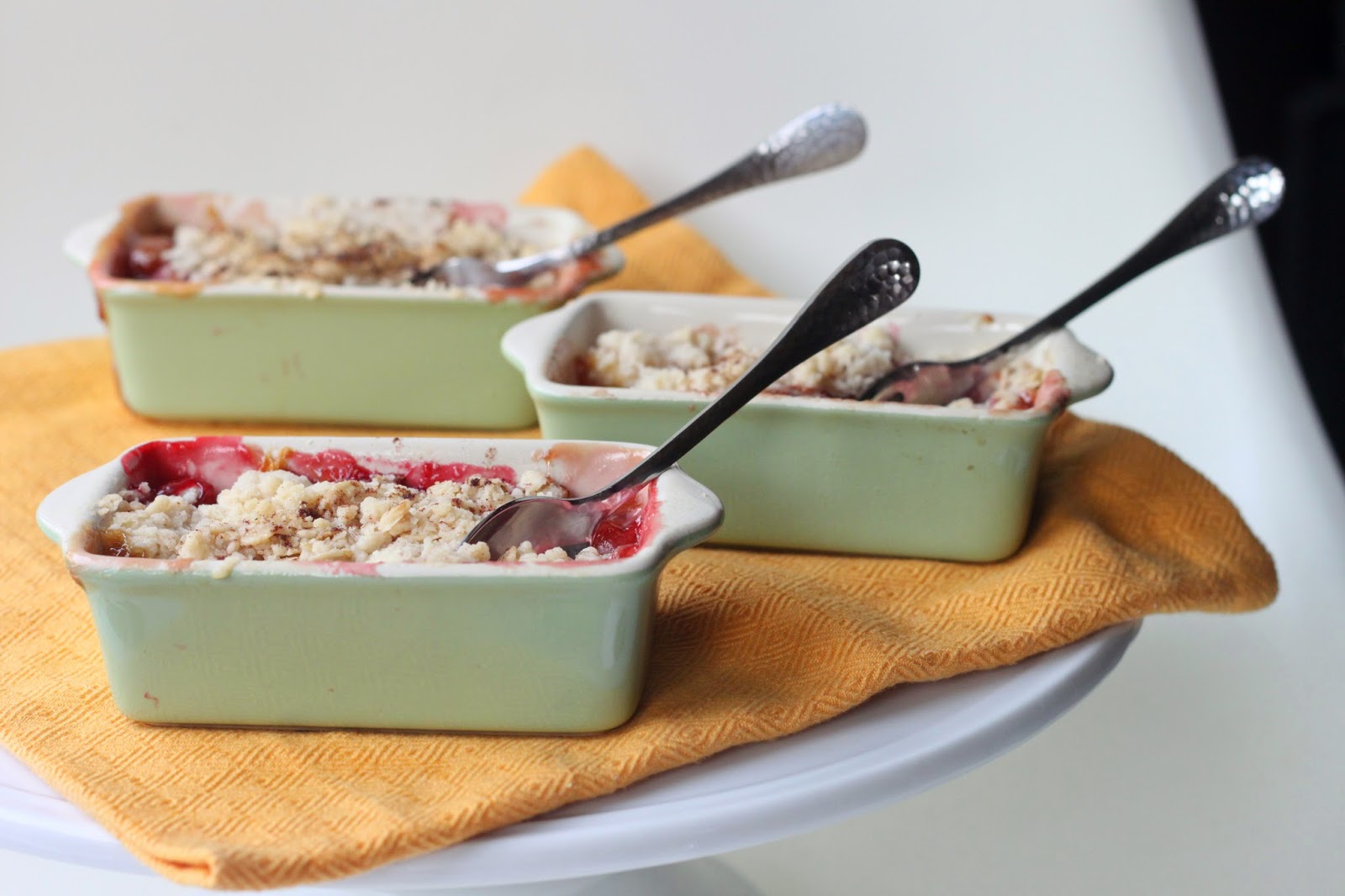 For those of you who don’t know, just as I didn’t, crisps are like a pie filling with a streusel-style topping. Although I searched for many base recipes, I ended up improvising based on flavors I thought might work well together. The end result was something that surprised me very much.

I think I officially need to stop saying that I’m not a fan of cooked fruits, because this was far more delightful than I ever expected. The combination of peaches and raspberries left a lovely tart taste in my mouth, and the maple syrup lent a new dimension of sweetness. The topping was just slightly crunchy and buttery, simply perfect. 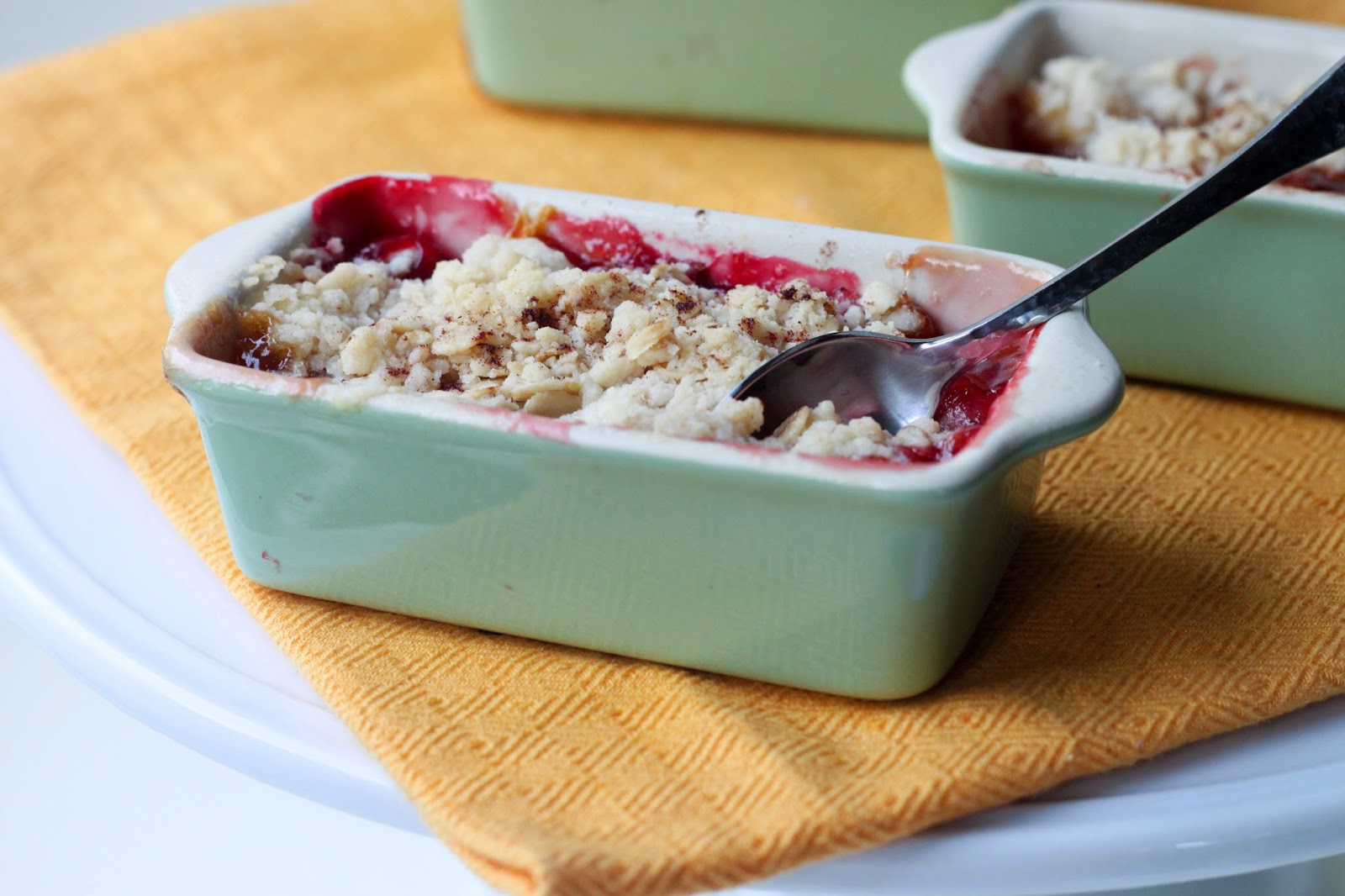 Both years, I've made a cinnamon ice cream to go on top. Cinnamon ice cream is one of my favorites but it's so hard to find in stores. For some reason, no one sells cinnamon ice cream, save for a local ice cream shop in St Louis. I love having some on hand in the summertime because it's perfect with any pies, cobblers, crisps, or just eaten plain. They're also the perfect macaron ice cream sandwich. Thanks again, to Cate (*sniffle*) for requesting cinnamon ice cream at the start of last summer, or else I'd never have known.

When I planned the crepe party, I knew I wanted to make these crisps, no matter what. And they were just as delicious as I had remembered them. But when I went to retrieve the recipe from my blog, like I often do, I couldn't find it. I realized I had never posted them on here! Totally nuts, I tell ya. 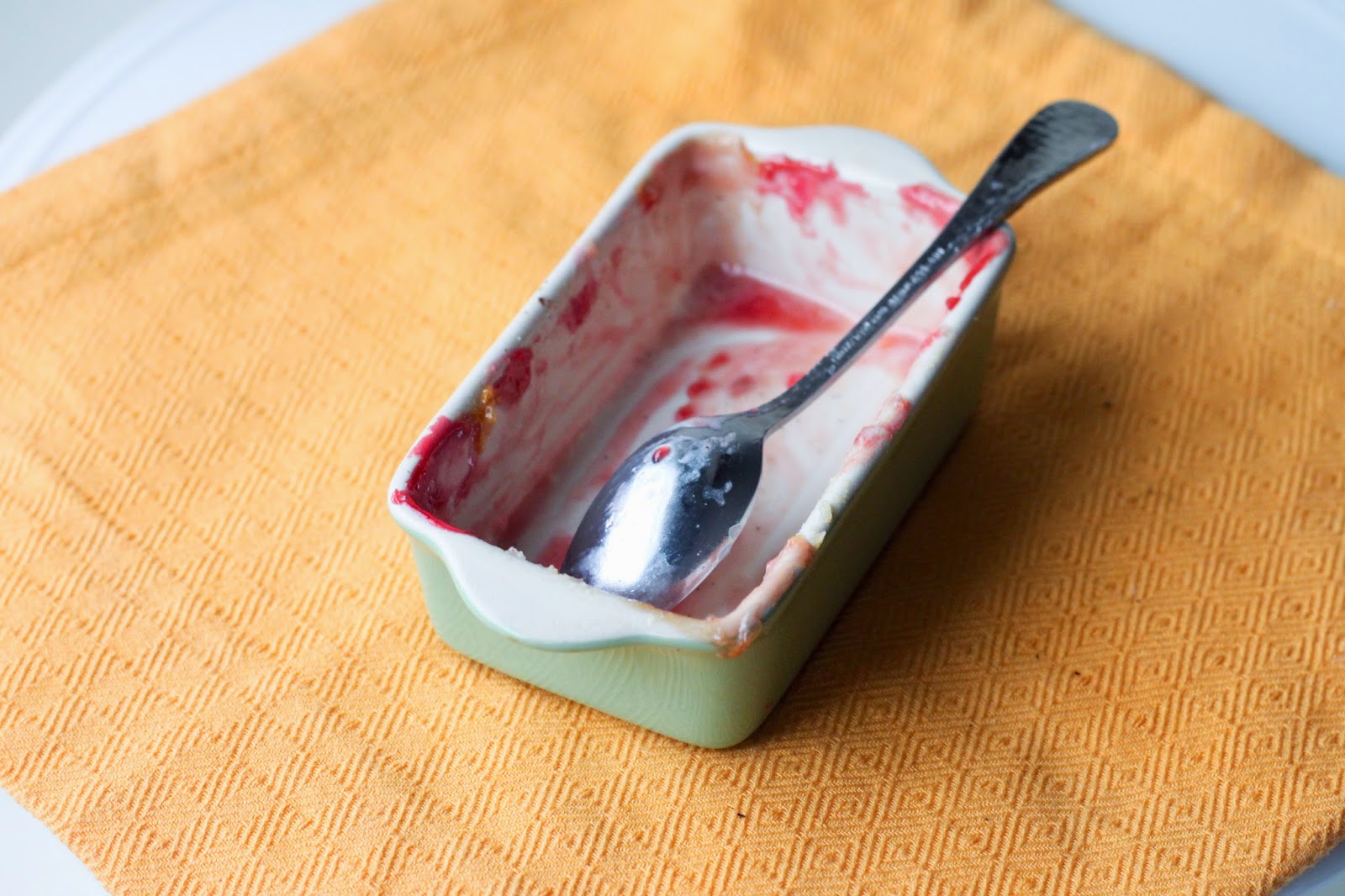 So without further ado, here's my favorite crisp recipe--fully adaptable to whatever fruits you may prefer, but I urge you to try this combination when they're at their freshest/cheapest.

Peach and Raspberry Crisp
Adapted from Martha Stewart
Approximately 8 Servings
1 cup all-purpose flour
Pinch salt
6 Tbsp. cold butter, cubed small
1/3 cup oats (You can increase this to 1/3 cup if you really like oats.)
6 to 8 peaches, peeled and cubed
1/2 cup raspberries
2 tsp. lemon juice
½ cup (not packed) brown sugar
1/8 tsp. cinnamon, plus additional for sprinkling
1 Tbsp. cornstarch
½ Tbsp. Grade B maple syrup (in each ramekin)
Preheat the oven to 375 degrees.
Whisk the flour and salt together in a bowl.
Using a pastry blender or your fingers, cut in the butter and oats, mixing until the butter is the size of peas. Set the oat and flour mixture aside.
Toss the peaches, raspberries, lemon juice, sugar, cinnamon and cornstarch in a bowl until combined.
Pour the fruit mixture evenly into 8 small ramekins. (You can also use an 8-inch or larger baking dish.)
Drizzle maple syrup over the fruit mixture.
Sprinkle with the oat and flour mixture.
Sprinkle extra cinnamon on top.
Bake for about 30 minutes, or until bubbling and evenly browned on top.
Serve warm with a scoop of ice cream.
Cinnamon Ice Cream
Adapted from Jeni's
Makes about 1 quart
2 cups milk
1 1/4 cup heavy cream
2/3 cup granulated sugar
2 tbs corn syrup
1 tbs + 1 tsp cornstarch
1.5 ounces cream cheese
pinch of salt
1 heaped tsp of your best cinnamon
Set aside the cream cheese and the pinch of salt in a large bowl.
Set aside 2 tbs of the milk in a small bowl, and stir in the cornstarch.
In a large saucepan, heat up the cream, the milk that's not mixed with cornstarch, corn syrup, sugar, and cinnamon.
Whisk until steaming and sugar is dissolved.
Let the mixture come to a boil (keep an eye on it because it will boil over right when you stop looking).
And then lower the heat and let it simmer for a little bit.
With the heat on low, whisk in the cornstarch and milk mixture (make sure it's properly combined) and then turn the heat to medium while continuing to whisk.
Let it boil for a 2-4 minutes until it thickens a bit.
Remove from heat and pour over the cream cheese/salt in the bowl.
Let it sit for a minute and then whisk until the cream cheese is melted.
Let cool completely and then churn in the ice cream maker, following the directions according to the manufacturer.
Store in an airtight container for at least 4 hours before eating.
Labels: cinnamon crisp ice cream peach peaches raspberries