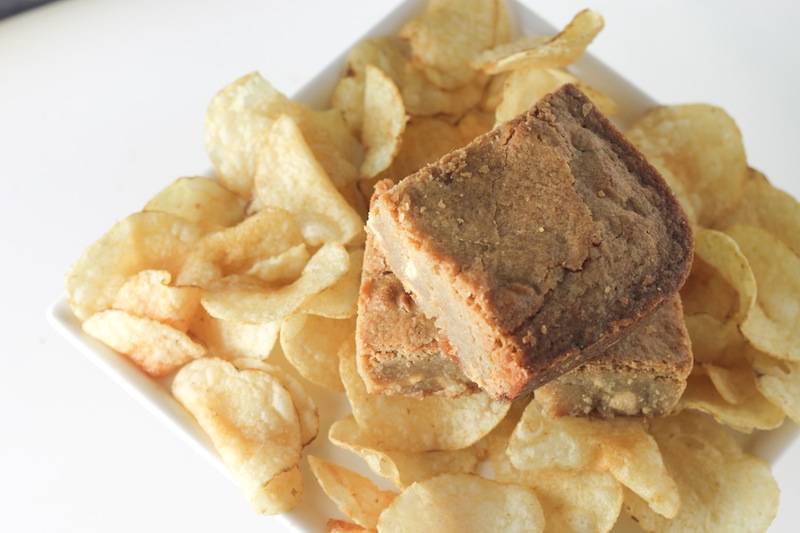 When I first moved to St Louis, I didn't know anyone outside of Joe and his classmates. I met some folks through graduate school but they were all much older than me and we never kept in touch. It was a slow process of figuring out what I wanted--dabbling in random job options, and taking my baked goods to stores around town before I heard about the Tower Grove Farmer'sMarket.  I checked it out one rainy Saturday and just knew I wanted to be a vendor there.
The day the applications opened, I enthusiastically signed up (3 months before the deadline) and eagerly awaite d the opening day. I had no idea what to expect: how much to bring, what I would need during the market day, etc. I just knew I had to be there at 5am, but I was so thrilled that even that couldn't dampen my excitement. 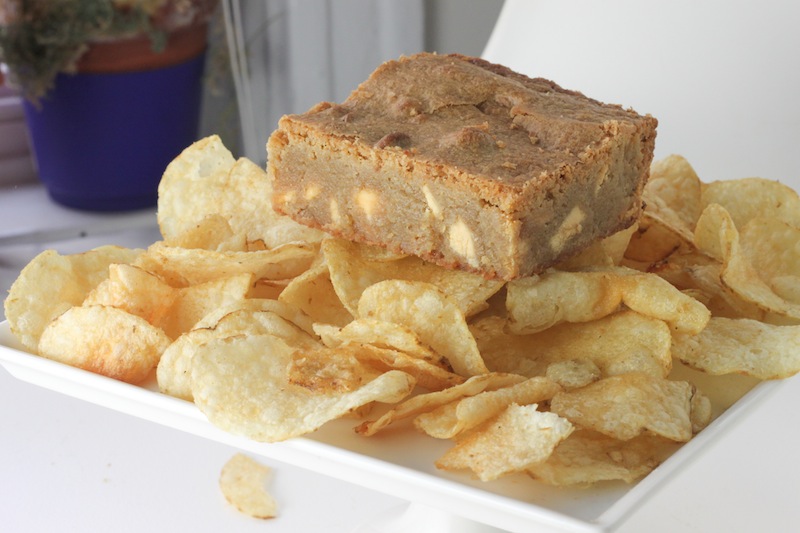 When we pulled up, we were directed to our spot and began to put up our stall. All the vendors seemed to know everyone else and were all greeting each other, some for the first time in months. People were polite but no one approached us—not that it mattered, as we were clumsily trying to set up our tent, prop up our signs, and, at the same time, move our car out of the way for the myriad of vendors driving up as dawn washed over the market. Once we were done, we still had an hour or so before opening and had no idea what to do. I'm shy and I didn't want to go introduce myself to other vendors just yet, even though Joe kept nudging me to do so.
In the middle of trying to figure out whom to approach first and fending off prodding elbows from Joe, a girl walked right up to us with a big grin on her face. She introduced herself as Kaylen, proud owner of the Farm Fresh Cupcakes stall, and talked a mile a minute about how much she loves macarons, how excited she was to see another sweets stall in the area, that she planned to open a bakery soon, would love to sell my macarons there, if I should ever need anything to just stop by her stall and her and her husband Pete would gladly help me out. It was kind of a blur of vowels at that point, but it didn’t matter because I was smitten. She was just so sweet and so awesome, and friendly in that genuine way which makes you instantly like someone. 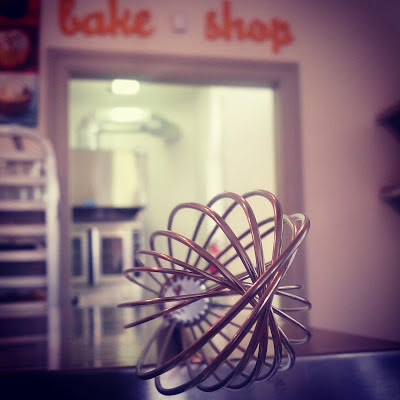 That was how it began. Fast forward through lots of sharing goodies at the market, lunch "meetings" to gossip and bond, the opening of Whisk: A Sustainable Bakeshop, and many days spent baking and hanging out in the Whisk kitchen, and today we have a tremendous friendship. So much so that we even merged our stalls for this year's market.

Kaylen and Pete are two of my favorite people. No matter how shitty our days might be going, we can always share a hearty laugh together and enjoy each other’s company. It has been absolutely amazing to watch their business expand from a stall to a storefront, and to see their delicious baked goods get, impossibly, even better. 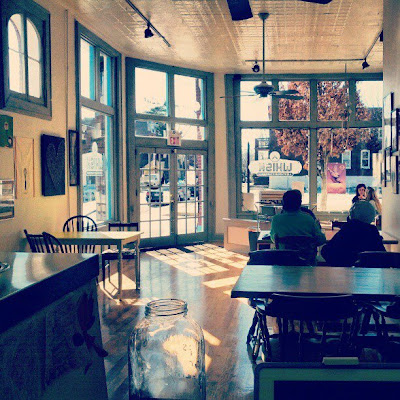 Whisk is the cutest bakeshop in St Louis; you need to spare at least a good twenty minutes to appreciate all the art on the walls. Unlike many places who claim to be sustainable, Whisk actively lives by this mantra. Their décor uses repurposed materials like industrial whisks as lamps covers and all of their food is sourced from local farms.  More importantly, Whisk makes other businesses be sustainable by helping them grow and connecting them to new customers. From my macaron business to a myriad of others like The ReTrailer, Flowers to the People, Firecracker Press, and so many more, Whisk has been a great force for good within the community and the local economy.
Oh, and did I mention that Kaylen and Pete they live upstairs above the shop, use local and organic ingredients as much as possible, and even grow fresh ingredients in their backyard? Too cute, I know.
If all of this hasn’t made you want to drop by and hang out for an afternoon, you just might be a Dalek. Oh, and Whisk has, by far, the best scones I’ve ever tasted. And this is coming from someone who really doesn't like scones. But, at Whisk, the usual fare of dense, dry scones are nowhere to be found. Instead, you’ll discover a deliciously moist and flavorful selection of creative flavors like apple cheddar, bacon blue cheese, and maple oat. It's perfect for a rainy morning or for a major study session with a cuppa tea on their couch.
Other items include cupcakes (chocolate beet FTW), whoopie pies, cookies, pop tartlets, ice pops, and whatever else Kay's in the mood for trying out.
They also make sure to include vegan and gluten-free items so that everyone can find something they like. I especially love that the vegan and GF items taste so good that it's hard to tell them apart from the regular items--they don't sell anything that they wouldn't eat themselves.
Of course, the best part is, I get to taste-test anything I want!
I'm notorious for trimming the very edge pieces off these blondies and noshin' on em and I love Kay for putting up with me. They have regular blondies but recently, they upped it a notch by mixing in potato chips. Because salty and sweet is the best match made in heaven since dogs and babies, duh.
I got Kaylen to part with her potato chip blondie recipe so that I could share it with you guys. When I first brought one home for Joe, he was so confused (although he happily ate it in two big bites) because he'd never heard of a blondie before. Truthfully, I'd heard of them but never tried one. Blondies are pretty much "blonde brownies" since there's no cocoa, but the use of brown sugar makes it all butterscotch-y. They're definitely on the sweeter side, but omitting chocolate chips and adding in nuts, dried fruits, or salty stuff (like potato chips) is always an option.
The recipe is also oh-so-easy to put together--just one bowl, and you can toss in whatever you have hiding in your pantry (just remember to adjust the sugar if you do candy bars). It's perfect for a last-minute guest or bringing a treat to a friend's place to celebrate any small occasion...or, just satisfying a late night urge to bake. Make 'em! Oh, and be sure to check out Whisk if you're ever in the area, you might even run into me :) 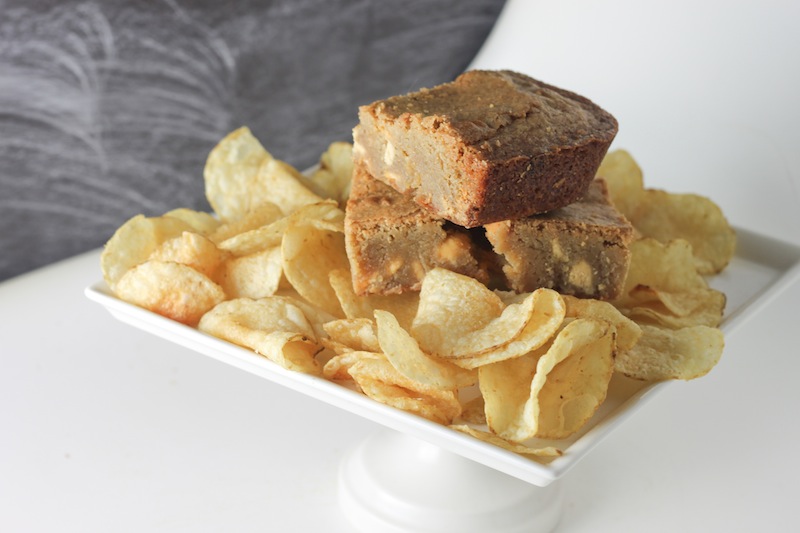 Preheat oven to 325 degrees F and spray a 9x12 inch pan.
Melt butter in a microwave or saucepan.
Add brown sugar and stir with a spoon until thick.
Add three eggs, one at a time and stir well after each addition.
Add flour, vanilla, and salt.
Then stir in white chocolate chips and potato chips.
Spread batter into prepared pan and bake for 30-40 minutes or until browned on top, more browned on the sides, and the middle doesn't jiggle.
Remove from oven and let cool before cutting.
Sprinkle generously with crushed potato chips before serving.

Kaylen's tip: Try the blondies warm, with a scoop of ice cream on the side!