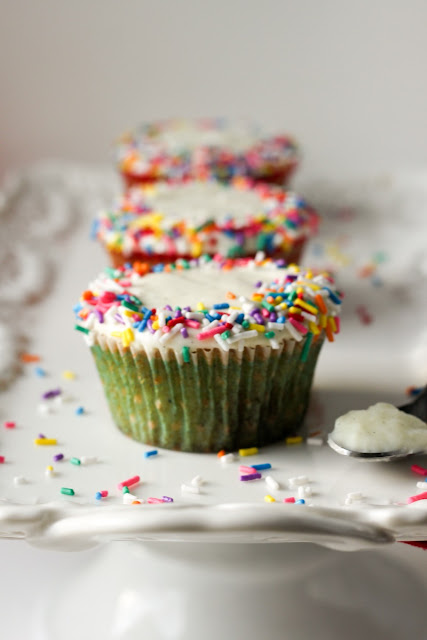 If you type “vanilla cupcake recipe” into a Google search, you will find at least 2,470,190 results. Everyone has a vanilla cake recipe they swear by. Your preference really just depends on what vanilla means to you. I used to confuse vanilla cake with something overly sweet and headache inducing. Whenever anything boasted of being all-vanilla, the essence of vanilla was almost always buried in masses of sugar. I wondered why people would ever want vanilla anything without at least a little bit of chocolate to ground that wallop of sugar. I mean, how boring.
Years later, after stumbling upon a jar of vanilla sugar from Home Goods and taking in a deep whiff of the delicious aroma, I wondered why I hadn’t truly ever enjoyed a vanilla cake … so I ventured to make one myself. 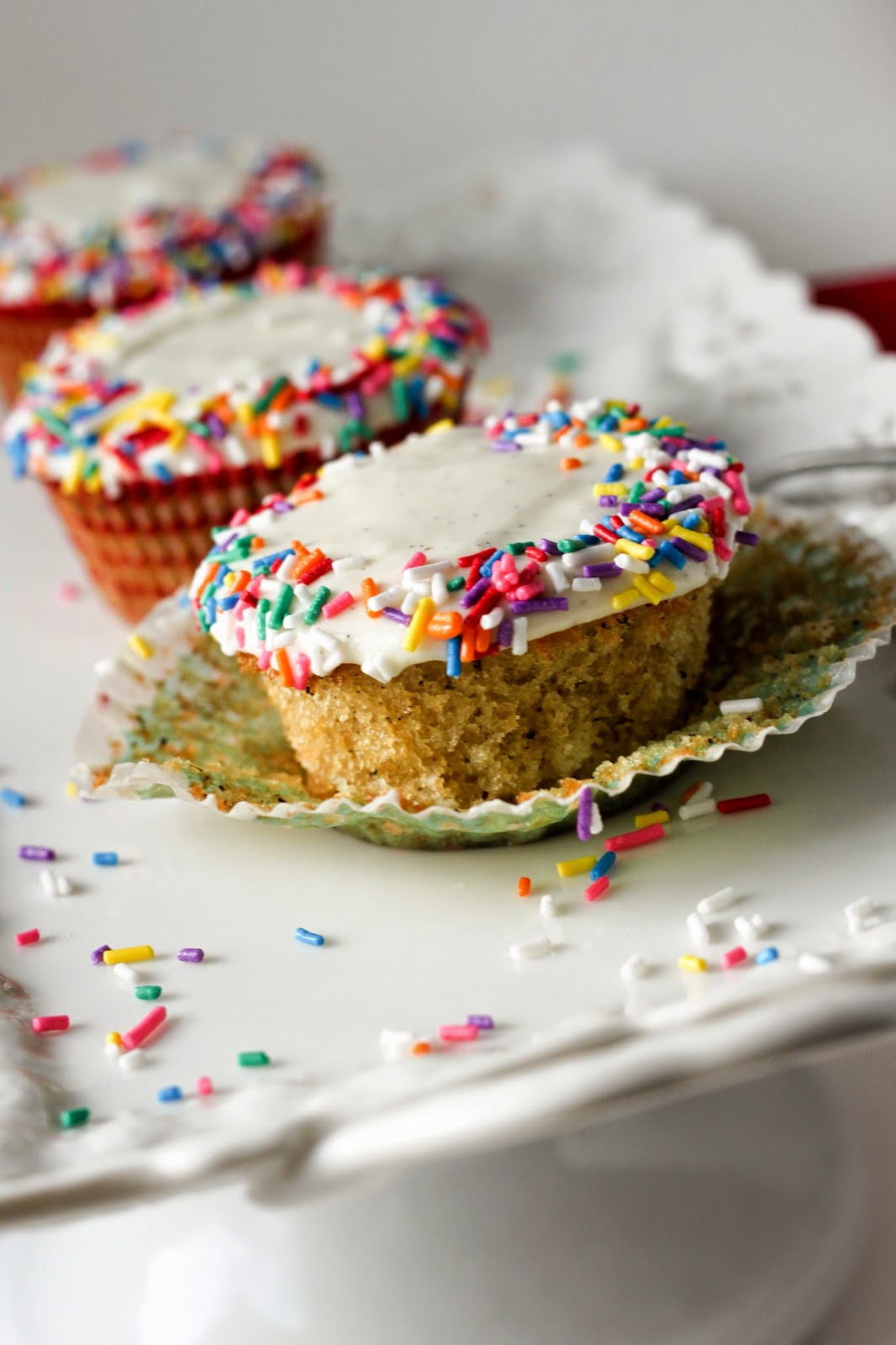 After testing several recipes that I found online, I finally returned to a classic: white chocolate raspberry cupcakes that I’ve made countless times for many orders and birthday parties. By upping the vanilla content, the cupcakes were completely transformed into bean-flecked beauties, giving off the most enchanting smells of vanilla. To keep the vanilla taste lingering, I filled the centers of the cupcakes with a luscious vanilla bean pudding that I will now be making for years to come, and then I topped them with my favorite vanilla bean cream cheese frosting.
It took every part of me not to add something else to this – some chocolate or strawberries – but I was paying homage to all the crazy people who love all things vanilla (I even showed restraint with my rainbow sprinkles). 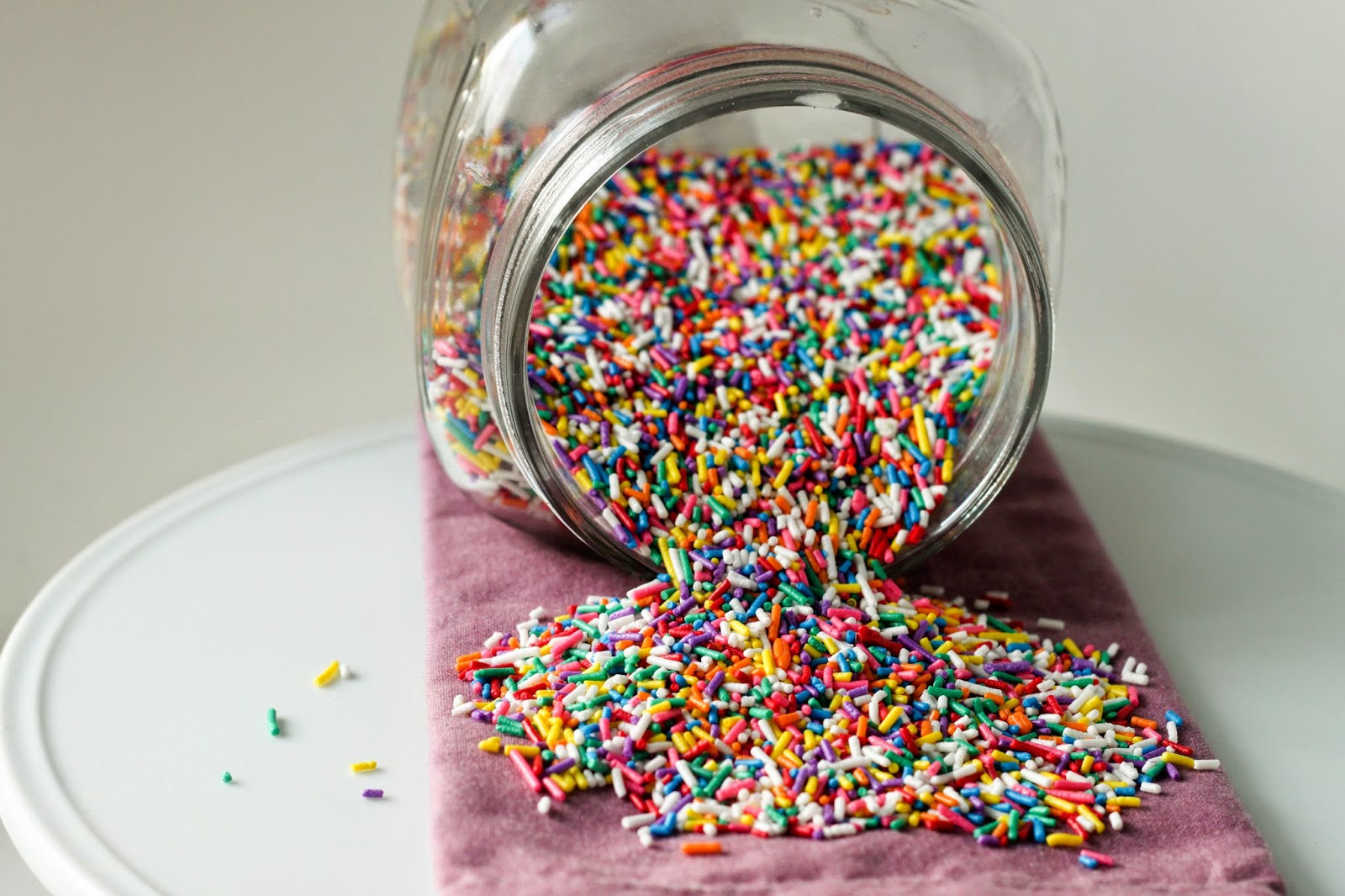 Although the cupcakes were intended to go to my boyfriend’s workplace, my friends and I ended up eating them all, savoring every last crumb. That’s how I ended up with my own version of a truly vanilla cake. And somehow, in the process, I fell in love with something all-vanilla myself. 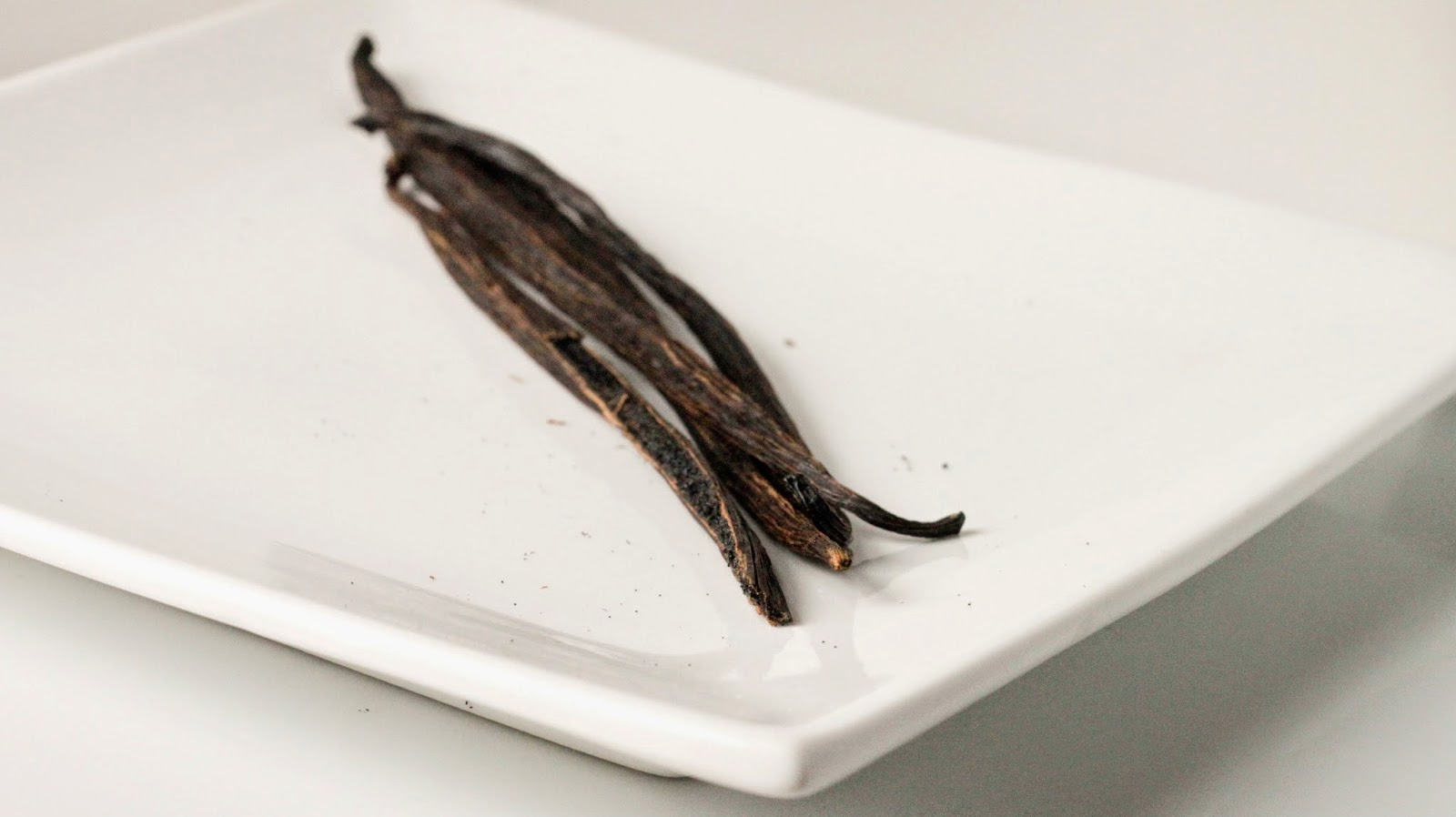 Here’s my white chocolate raspberry version of theses cupcakes for those of you who aren’t as crazy about vanilla. 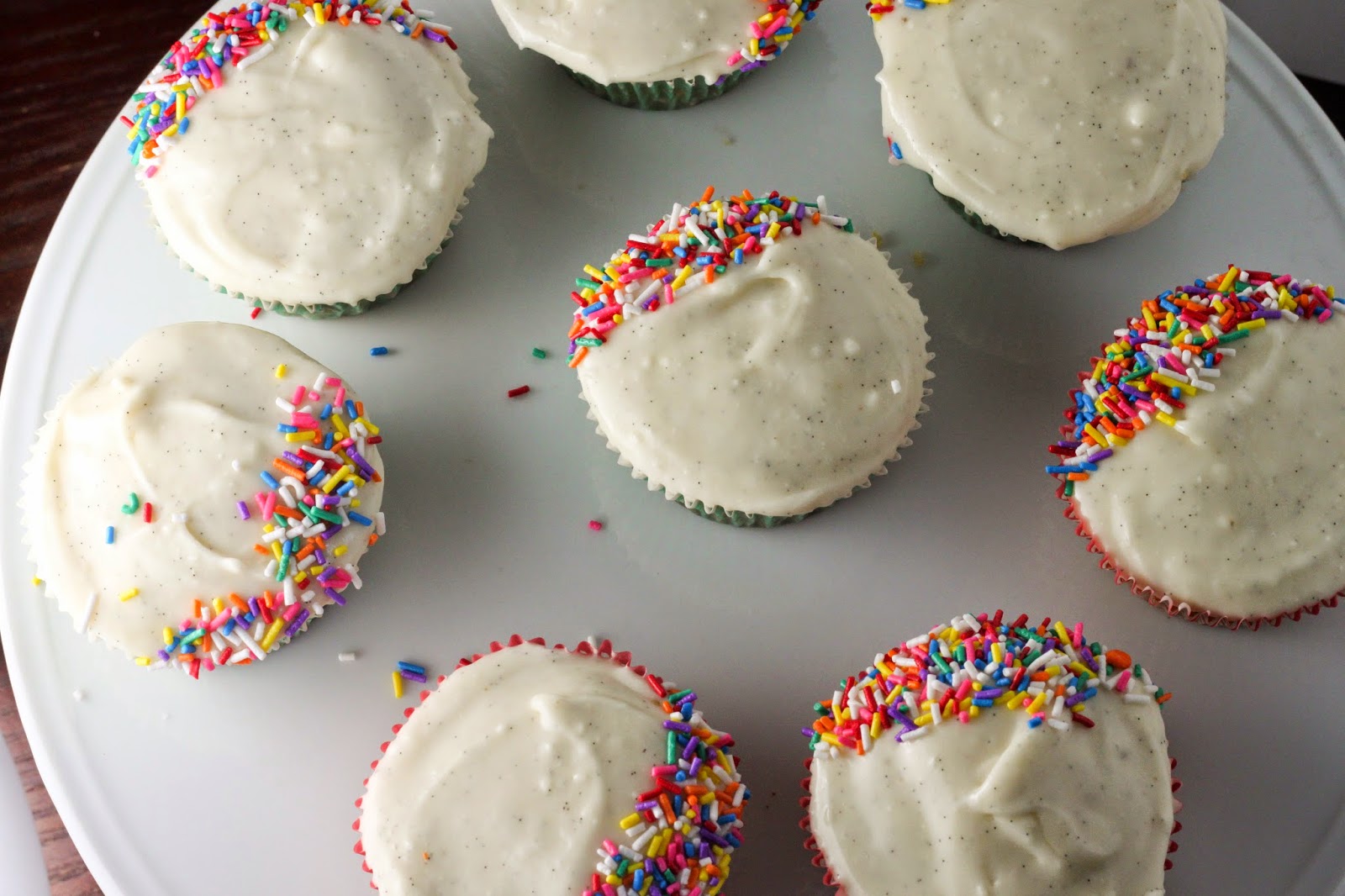 Vanilla Cupcakes
Makes exactly 12 cupcakes
1 stick butter, at room temperature
½ cup sugar
¼ cup vanilla-infused sugar*
1 Tbsp. pure vanilla extract
2 eggs, at room temperature
1¼ cup of flour
¼ tsp. baking soda
1 tsp. baking powder
¼ tsp. kosher salt
¼ cup sour cream
Vanilla bean pudding (recipe follows)
Vanilla bean cream cheese (recipe follows)
• Preheat the oven to 350 degrees.
• With an electric beater, beat the butter and sugars on high, until fluffy.
• Add the eggs and vanilla extract and beat well.
• Use a spatula to stir in the rest of the ingredients.
(Don’t use a beater or else the cupcakes will come out dense.)
• Divide the batter evenly in a cupcake pan to make 12 cupcakes.
• Bake for about 15 minutes, or until a cake tester comes out clean, or with few crumbs attached.
• Let cupcakes cool completely before removing from the pan.
• Use a cupcake corer or a knife to cut a hole into each cupcake.
• Fill the cupcakes with vanilla bean pudding, and then top them with frosting and sprinkles.
*If you can’t find vanilla-infused sugar, add the scrapings from 1 vanilla bean to regular sugar.
Vanilla Bean Pudding
Adapted from SmittenKitchen
Makes 3 cups
2 2/3 cups of 2% milk, divided
½ cup sugar
¼ cup cornstarch
¼ tsp. salt
1 vanilla bean, including the scraped-out inside (or 2 tsp. pure vanilla extract)
1 large egg
• In a saucepan, bring 2 cups of milk to a boil.
• In a separate bowl, combine the sugar, cornstarch, salt and the scrapings from the inside of the the vanilla bean. (If using vanilla extract, wait until the end to stir it in.)
• Toss the scraped-out vanilla bean pod into the saucepan of milk.
• Slowly whisk in the remaining 2/3 cup of milk into the bowl of sugar. Then whisk in the egg.
• Once the milk in the saucepan comes to a boil, gradually add it to the sugar mixture while whisking the whole time.
• Return the entire mixture back to the saucepan, and stir constantly with a heatproof spatula.
• Once it simmers, cook for one minute longer and then stir in the vanilla extract if using.
• Pour back into the original bowl and let cool.
• Once cooled, cover the pudding with plastic wrap and store in the refrigerator until chilled, about 1 hour.*
*You will have leftovers of this pudding, but you’ll be grateful for it. Serve with fruit or use as a pastry cream in other recipes. You may also double the cupcake and frosting recipes to accommodate the leftover pudding.
Vanilla Bean Frosting
Adapted from SmittenKitchen.com
½ stick butter, at room temperature
1 cup powdered sugar
4 oz. cream cheese
1 tsp. pure vanilla extract
½ the inside of 1 scraped-out vanilla bean
4 oz. of mascarpone cheese*
• Beat all ingredients together except the mascarpone.
• Once fluffy, beat in the mascarpone, until the frosting is combined and smooth.
• Store the frosting in the fridge for about 20 minutes, or until it’s firm enough to frost a cake.
*Or you can use 8 oz. of cream cheese and omit the mascarpone.
Cupcakes, frosted, last up to 4 days in the fridge in an airtight container. Unfrosted, the cupcakes can be wrapped individually in plastic wrap and stored up to 1 month in the freezer. Vanilla bean pudding lasts up to 3 days in the fridge in an airtight container. 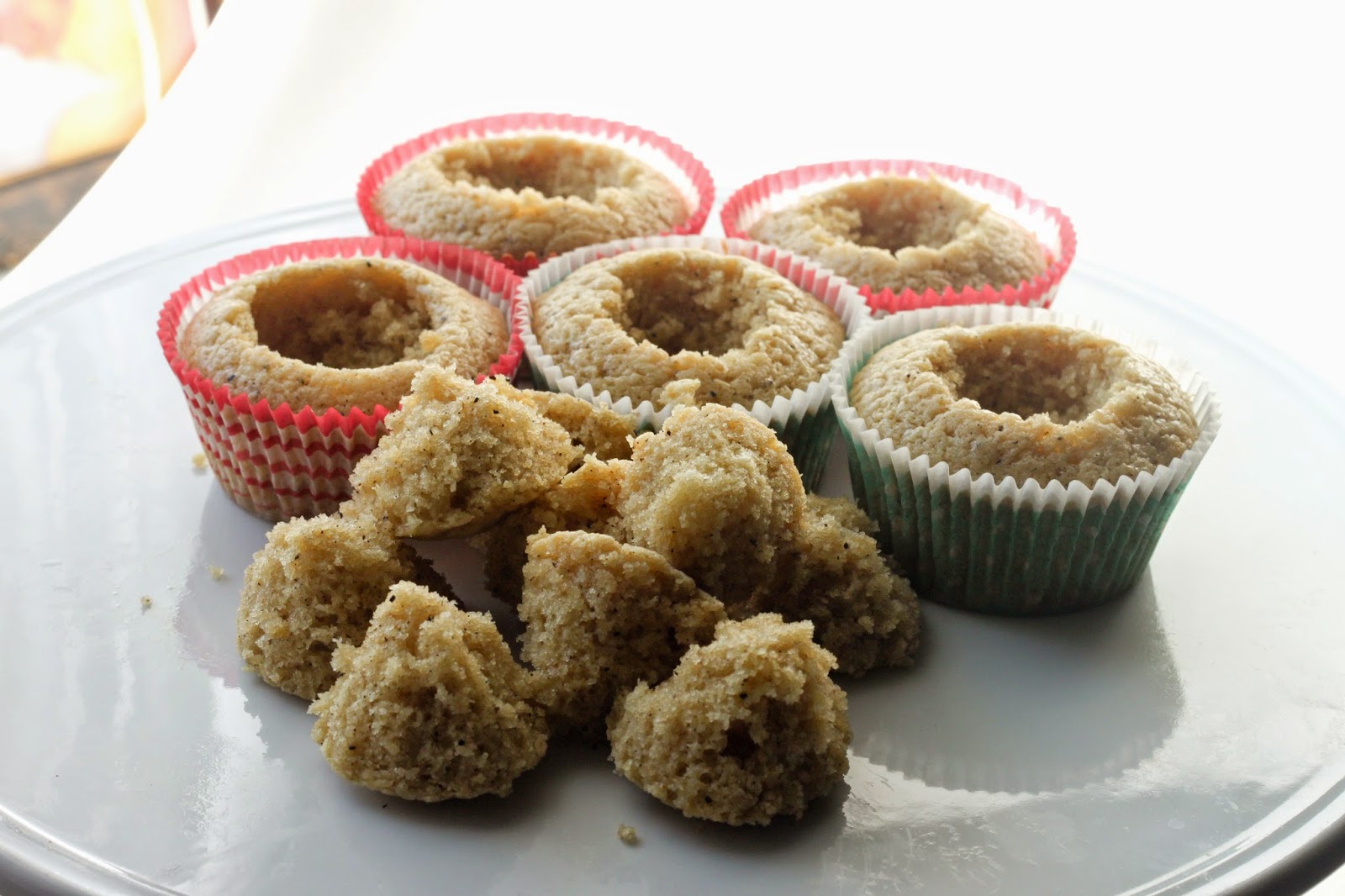 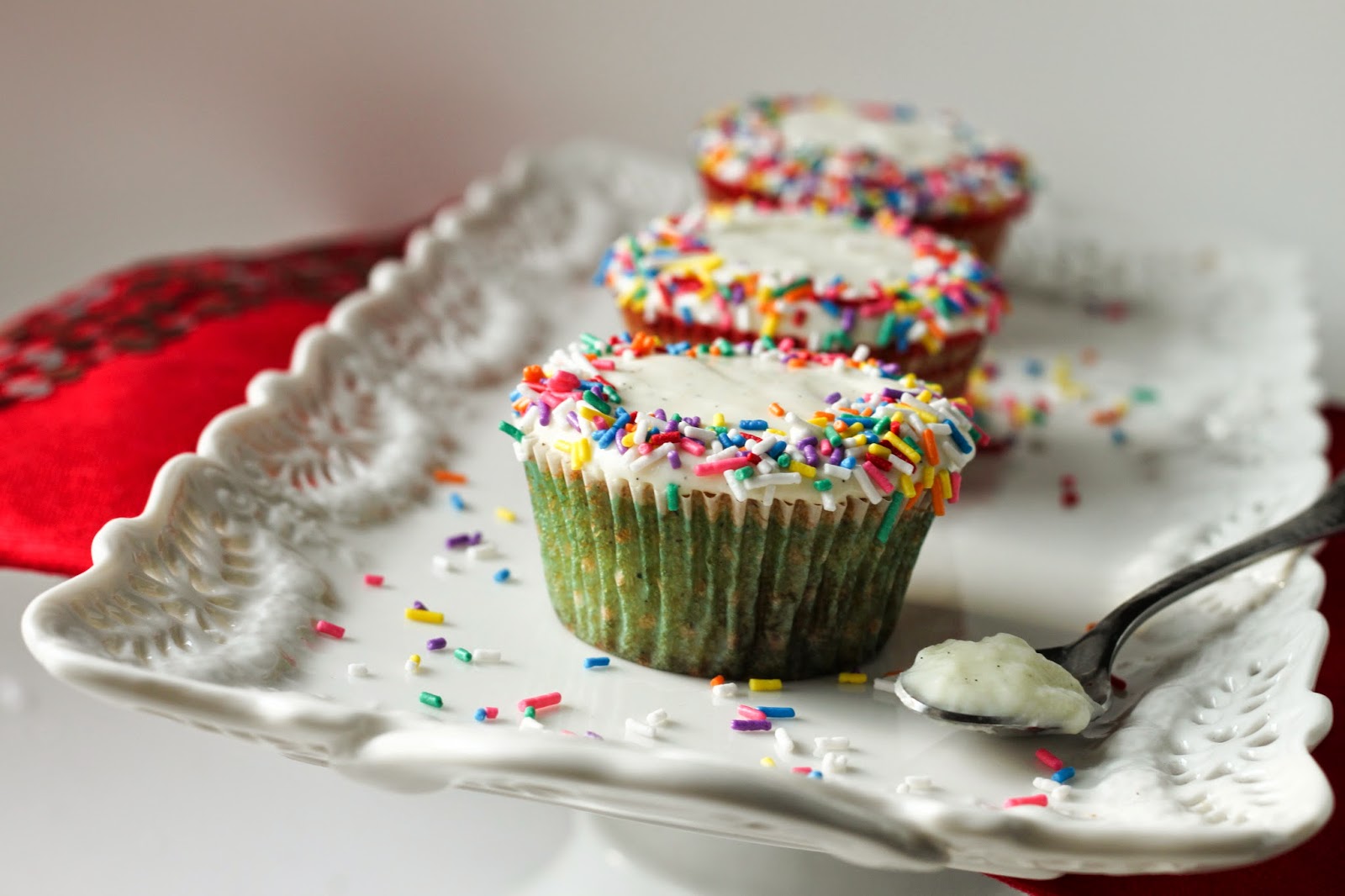