I was sixteen years old and visiting a friend in Toronto when I had my first taste of the famous chocolate-hazelnut spread, Nutella. We snuck down to the kitchen at three in the morning and made some toast, with Nutella sandwiched between them. I still remember the gooey chocolate spread oozing out from the warm bread, leaving the most delicious aroma in the air. The best part was definitely getting to lick the rest off my fingers.
To this day, it’s still my favorite way to eat Nutella (mixing some peanut butter is simply the icing on the cake, so to speak).

Since then, I’ve made many macarons with a Nutella filling and even tried my hand at nutella-swirled banana muffins, but haven’t gone much further than that. I am very fond of Nutella and have sweet, sentimental memories with it, but I’m not enamored with it like many others I know.
So when I found out it was Nutella Day (honestly, I don't get all these food days! And I keep missing them) last week and the food blogosphere was going crazy with posts dedicated to this sweet spread, I had originally thought I’d stay out of it. But then I noticed my lonely, neglected Nutella jar collecting dust in my pantry and decided to try something new...

These cream puffs (also known as profiteroles) are simple enough, with just a dash of cinnamon. 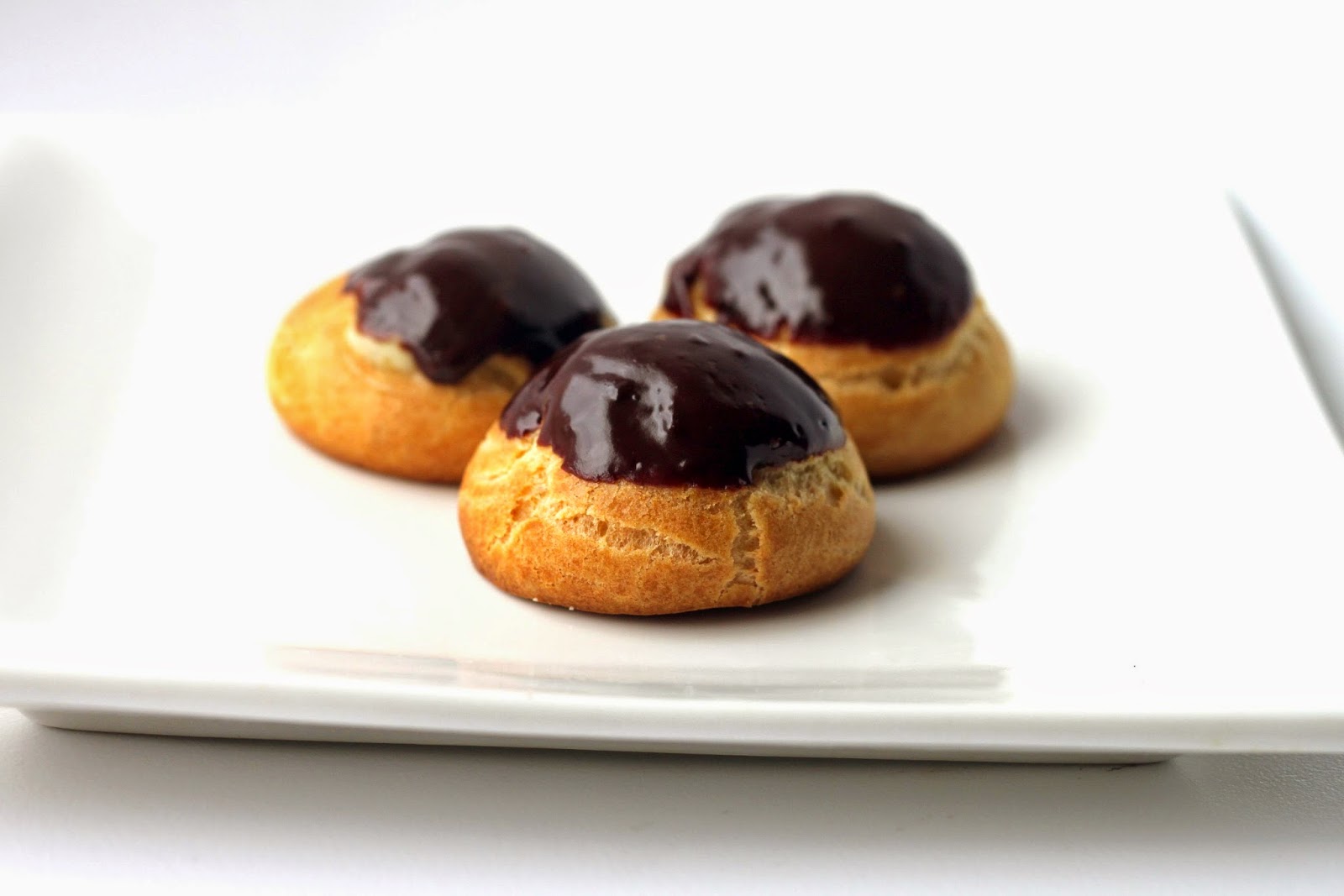 Note: I just bought a tiny jar of the fancy Vietnamese cinnamon from Penzeys Spices and I can now see why it's fancy. The smell is intoxicating, and these are worth the good stuff.

The Nutella filling is luscious, fluffy, light, and I made sure to stuff as much as of it as I could into each puff for a mouthful of heaven. I highly recommend you go make these now, and don’t forget to lick the frosting bowl when you’re done.
Nutella Cream Puffs
Adapted from Laduree
Makes about 36
5.5 tbs butter
10g (1 tbs) sugar
120g (1 cup minus 1 tbs) cake flour
100ml (1/2 cup) whole milk
100ml (1/2 cup) water
pinch of salt
3 large eggs
1/8 tsp fancy cinnamon
Preheat oven to 350 degrees F.
Bring the butter, sugar, milk, water, and salt to a boil in a saucepan. Remove from heat and stir in the flour, whisking vigorously until it turns into a homogenous paste. Let cool and add eggs, one at a time, beating well after each addition, and stir in the cinnamon last.
Fill a piping bag with a round tip with the batter and pipe small mounds on a baking sheet. Top with pearl sugar (optional).
Bake for 9 minutes. Then open your oven door slightly (or stick a wooden spoon in it to hold it open) and bake for 20-25 minutes until golden.
Remove and let cool.
Nutella Filling:
6.5 oz Nutella spread
2.5 tbs butter
6-8 tbs heavy whipping cream
Beat all ingredients together on high until fluffy. Add more cream according to taste.
Pour the filling into a piping bag with a small round top. Poke holes in the sides of each cream puff, or on the bottom with the tip of the piping bag and fill with frosting.


By the way, I hope everyone had a wonderful Valentine's Day! I made a fancy lobster pasta for Joe and his roommate, Ran. Joe attempted to make me chocolate molten lava cake but mixed two recipes together and ended up burning the top while the inside remained undercooked. But I love him for trying :D
Labels: cream puff nutella pastry profiteroles