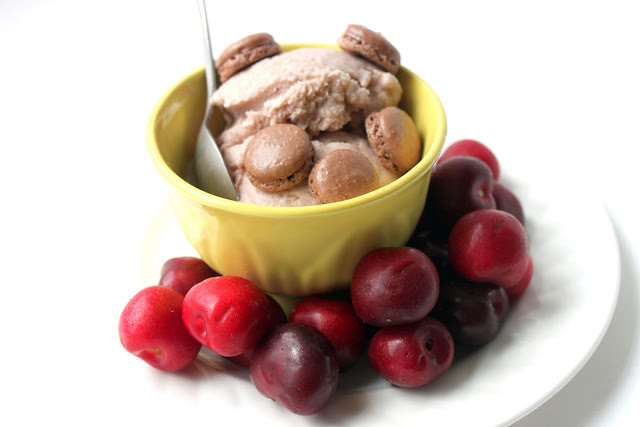 This month's Mactweet challenge was to make ice cream and combine it with macarons. Since I didn't want to use store-bought ice cream and I don't have an ice cream maker, I thought of only one other option. Making mini macs as a topping!
I never get to go to Sam's Club since Joe is so busy at the hospital each day and I don't have a membership there. So when he did have time to go, we both got a little excited with all the fresh fruit there... We bought watermelon, cherries, strawberries, blueberries, bananas, and golden kiwis. I would have pounced on the raspberries if they had had any that day...
It wasn't until we got home that I realized we had bought way too many fruits. Our solution? Smoothies for a week! They were insanely delicious too, and I even put in some spinach since you can't taste it.
I didn't want to pit cherries just for a smoothie and I was trying to eat them but the box was so huge. So I decided to try a homemade ice cream with them instead.
I pitted over fifty cherries by hand, with a knife! That is no joke, my friends. But I think it was worth it. Also, I was catching up on my TV shows at the same time so it didn't feel so bad... 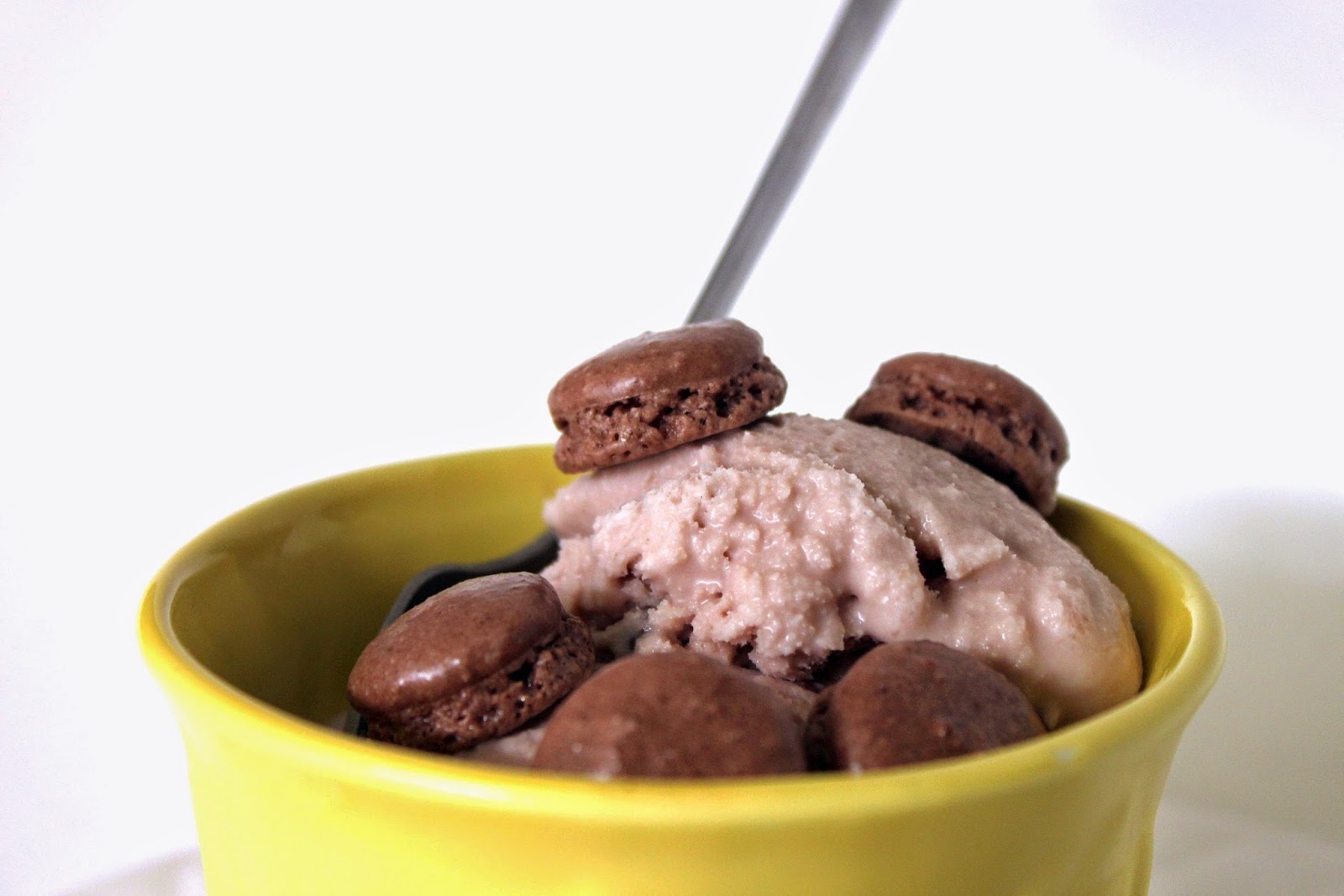 Anyway, I found out that if you don't have an ice cream maker at home, one thing you can do is take the ice cream out of the freezer every 30 minutes and whip it with a hand mixer a few times. Do this over several hours and you should help it become more icy. I did this only three times and it was a vast improvement over the mango ice cream consistency, I think.
I made the chocolate macarons in mini size and they were adorable. I tossed them on top and served them to Joe. He enjoyed it a lot, although I liked the ice cream on its own just fine. The cherry flavor was wonderful, and different from simply eating them straight. I never would have thought of cherry ice-cream had I not been inspired by the latest Mactweets challenge! 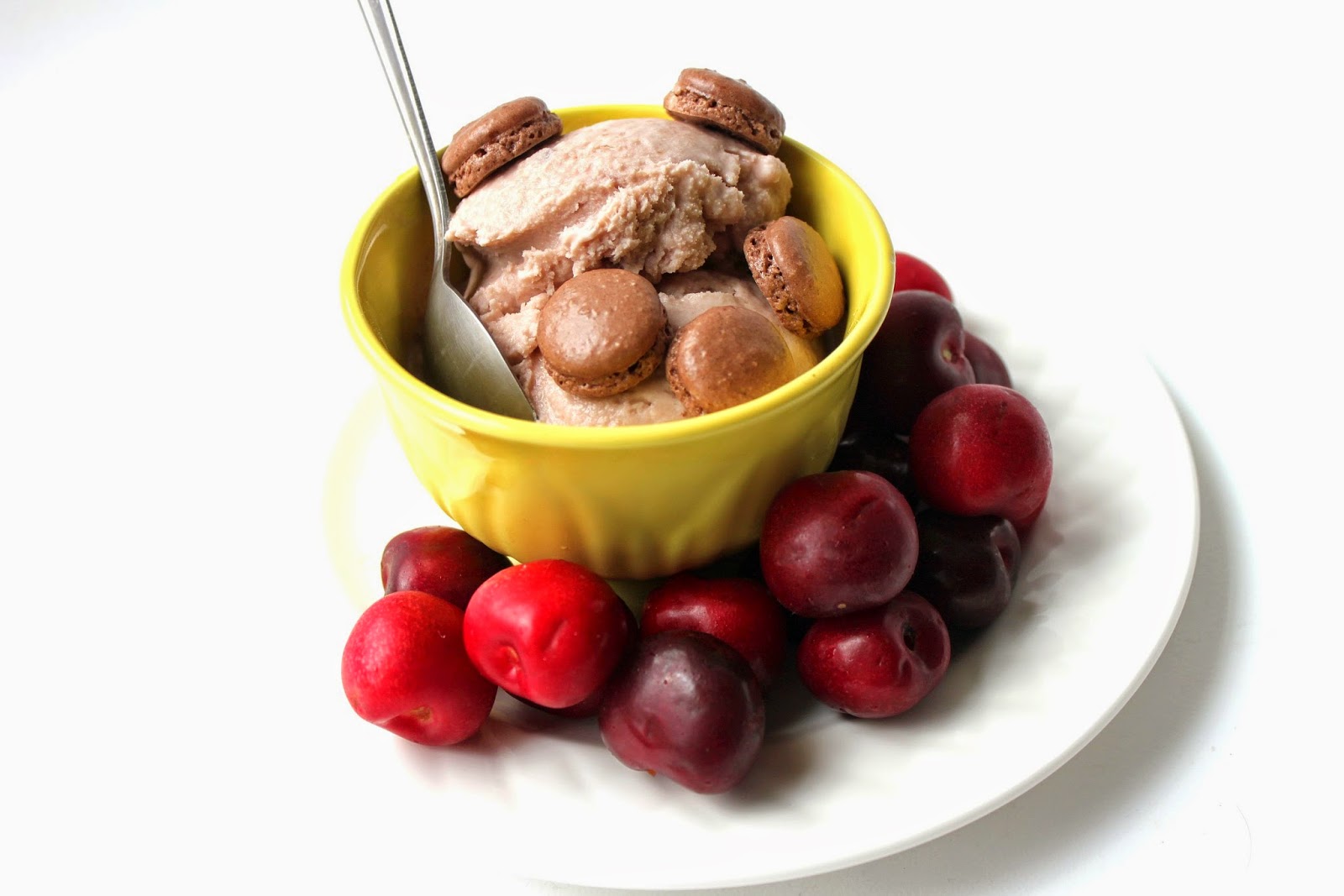 I also have a few chocolate mini macs leftover for toppings with other ice creams, yum.
*If not adding chocolate macarons, chocolate chips would be delicious too*
Cherry Ice cream

Serves 8
2 cups heavy whipping cream
14 oz pureed cherries
14 oz (1 can) condensed milk - 14oz
1/2 cup sugar (optional - depends on preferred sweetness)
Blend together and freeze in a container.
Remove every 30 minutes over 2 hours and beat with a hand mixer (or viciously stab with a spatula)
Chocolate Macarons
100g eggs (about 3 egg whites)
120g almond meal
35g granulated sugar
200g powdered sugar
2 tbs cocoa powder
Combine the almond flour, cocoa, and the powdered sugar in a bowl, set aside.
Beat the egg whites in a clean mixing bowl with an electric beater, on low.
Add in the granulated sugar and continue beating.
Slowly turn the beater on high (after about a minute on each speed).
Stop when the whites are glossy and stiff and don't move in the bowl.
Add in the almond flour mixture in small amounts and use a flexible spatula to incorporate it into the batter.
Use the spatula to methodically scrape around the sides of the bowl, moving it into the center.
Add some more flour mixture and fold again.
Constantly scrape the spatula from the sides to the middle until the batter becomes one.
Repeat until all the flour mixture is incorporated and there are no streaks in the bowl.
The batter should be of lava consistency... if you drop some batter back into the bowl or a plate, it should spread and shouldn't leave a peak.

(I really like this video on making macaron batter, check it out!)
Use a piping bag with a round tip and fill with the batter.
Hold the bag perpendicular to the sheet.
Pipe out small dots, slightly smaller than a penny, leaving room for it to spread.
*I made about 15 mini ones and used the rest of the batter to make regular chocolate macarons (try sprinkling sea salt on the shells and fill with ganache!) I would recommend just making the entire recipe instead of trying to halve it*
Leave out for about 30 minutes or until the shells look dried on top.
Bake at 285 degrees, for 20 minutes (rotate the pan at 10 minutes).

*I had the most success with using a wooden spoon as a wedge in between the oven door to prevent the macarons from cracking, so you may want to try that!*