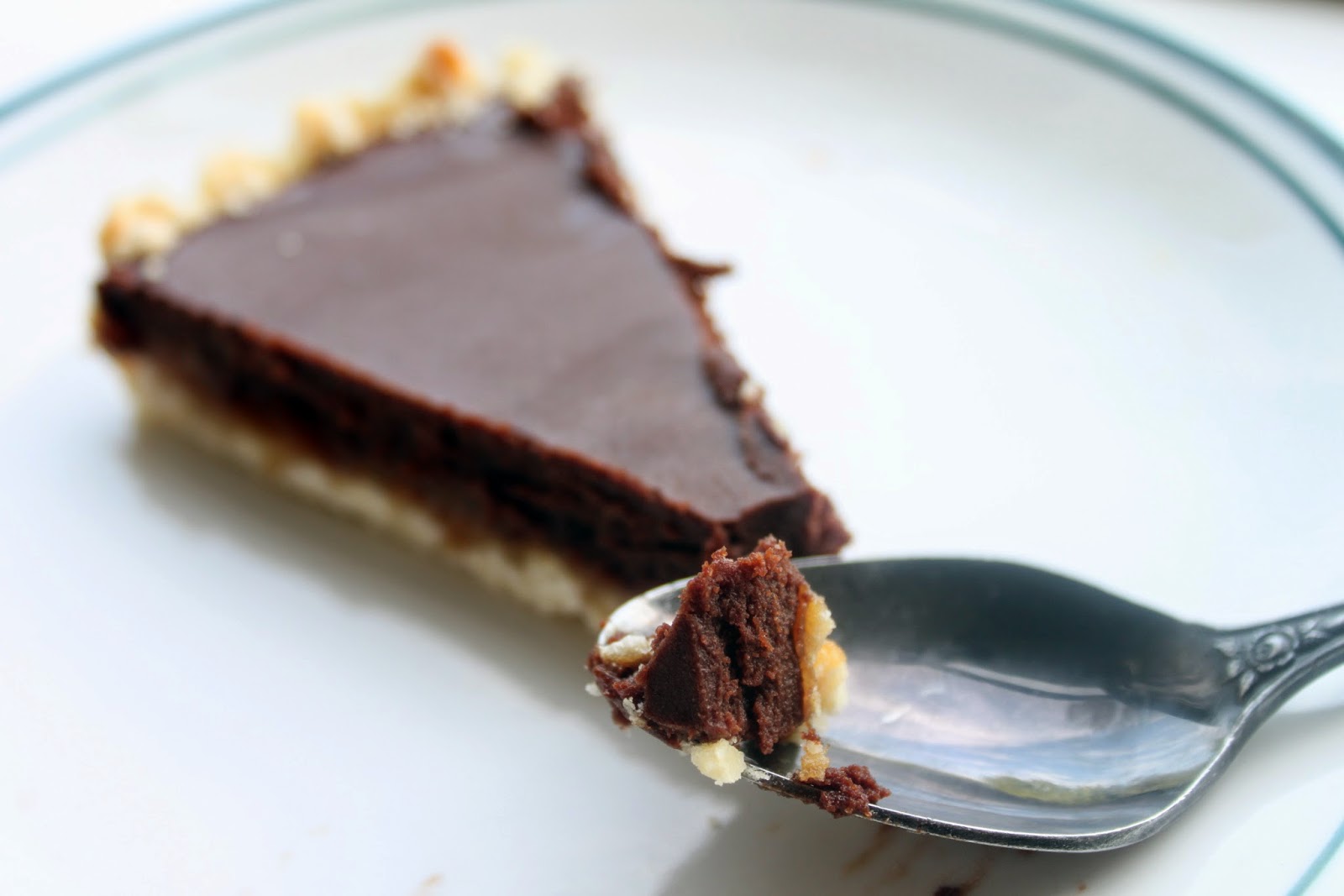 Now that I've been making caramel sauce from scratch, it's really come in handy! We used it on our sweet crepes in St. Louis, and I use it for salted caramel cupcakes all the time. It's great to just keep around in general. So, I was just playing around one day and thought I'd try out a new tart shell I saw online. It turned out to be a complete accident, since I was going for a mango lime tart, but it somehow turned into a chocolate caramel tart...
The tart shell was a bit crunchy for my taste, but everyone else loved it. Combined with caramel and chocolate, this tart was unstoppable! This is one of the happiest accidents I've ever created in the kitchen...

The story is a bit bizarre. I was going for the ultimate chocolate cupcakes, but I messed up somewhere in the process. The frosting turned out an odd consistency (to work as frosting), and I didn't know what to do with it, and I had the tart shell lying around... So I poured my caramel sauce into the tart base, and waited five minutes for it to set. Then I just dumped all the chocolate into the tart! It turned out very rich, but having one or two bites after dinner each night was great.


I'm almost scared I can't recreate this again, but this is the recipe I used, which was a combo of a bunch of different recipes. I want to try it again, but then I may end up eating the whole thing!

1 1/2 cups all purpose flour
1/2 cup powdered sugar
1/4 teaspoon salt
1 stick (1/2 cup) plus 2 tablespoons unsalted butter, cut into 1/2 inch pieces
1 large egg yolk
Beat all the ingredients together until combined. It might be a bit crumbly but you can press it together into the tart or tart shells. Bake at 350 degrees for 10-15 minutes, or until golden. Let cool. If you don't have a pan with a bottom that pops out, you may want to take it out of the pan before filling it!
Caramel Sauce
1/4 cup sugar
2 Tbsp water
1/4 cup heavy cream
1 tsp vanilla
Put the water and the sugar in a saucepan over medium heat. I would go ahead and measure out the cream and the vanilla since the sugar crystallizes so quickly. Keep an eye over the water/sugar mixture and keep stirring. As soon as it turns golden, take it off the heat. Some people wait till it turns brown but it tastes too burnt to me by that point, so I would stop after it's been golden for a few seconds. Slowly (it will splatter) add the cream and vanilla and keep stirring with a spoon over and over until it's fully incorporated. When it's slightly cooled, pour as much you think is appropriate for a layer in the tart.
Filling
1/3 cup (2 1/3 ounces) granulated sugar
2 large egg whites
Pinch table salt
12 tablespoons (1 1/2 sticks) unsalted butter , softened and cut into 1-tablespoon pieces
6 ounces bittersweet chocolate , melted and cooled
1/2 teaspoon vanilla extract


Heat the egg whites, vanilla, and sugar in a double boiler and stir until frothy. Then take it off the heat, and beat it. Here's where I messed up... Instead of beating it to glossy peaks before adding the rest of the ingredients, I added in the chocolate (melted) and the butter and just beat them all together. This altered the consistency for frosting, but worked in the tart! :)
Labels: caramel chocolate tart