So I stopped by Bakeshop the other day, which is a bakery on Peachtree Rd. I thought I'd see what it was about since it has some pretty decent reviews on Yelp, and I love me some baked goods!
I got a chocolate almond croissant and a vanilla cupcake with chocolate frosting. The croissant was great, reminded me of walking through Paris with my two best friends in winter. It had the perfect amount of almond paste and chocolatey goodness inside.

On the other hand... this cupcake

It was the worst cupcake of my life! There is definitely enough salt in regular food, why is it in my cupcake?! At first I thought it was the cake that was salty but it was definitely the frosting. Even the little chocolate balls on there were crunchy and slightly salty, besides the salty frosting.
Alas, it was so pretty to look at, but I just couldn't stomach it. I tried to eat just the cake but it was oddly dense and weird. The bottom had some chocolate but the chocolate was so thick and also a little salty. I wonder if they accidentally got sugar confused with salt... Sigh, this dumb cupcake cost me $3.50... at least I got a good photo out of it. 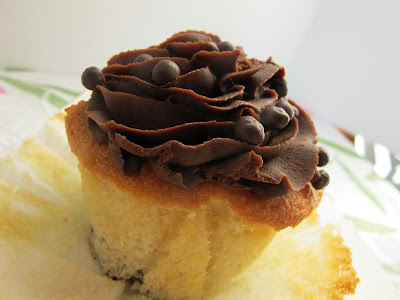