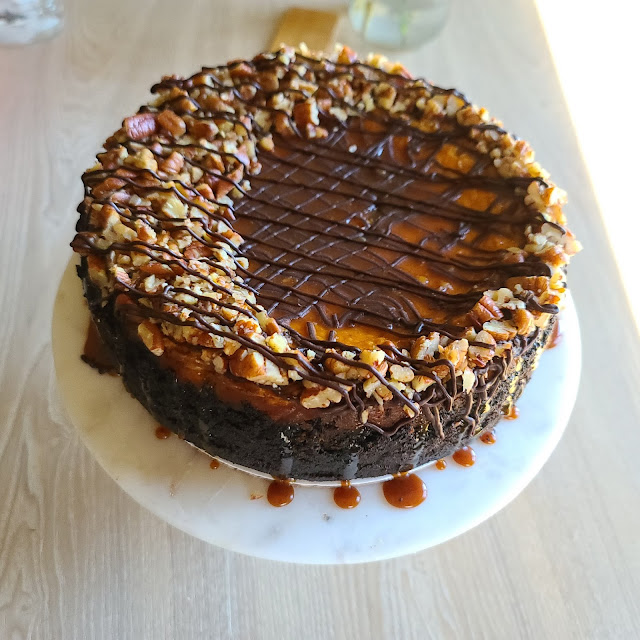 This cheesecake is a perfect balance of flavors and textures. The crust is made of dark chocolate oreos, then there's a layer of caramel and pecans. Then the cheesecake batter is poured in and once it's baked, it's topped with more caramel, pecans, and a luscious chocolate ganache. It sounds like it might be super sweet or even overly rich but I promise it's not. I made this for my father in law and it was a huge hit with everyone, even with ones who don't have much of a sweet tooth.

The cheesecake itself is pretty plain, a classic vanilla flavor with sour cream in it to curb the sweetness. It's a recipe I tried from Alton Brown after miserably ruining the first cheesecake recipe I tried. He adds in heavy cream and egg yolks which definitely make the cake oh so creamy.

The caramel, pecans, and chocolate add the most depth to the cheesecake, the flavors bounce off each other wonderfully in your mouth. I used the salted caramel sauce from Trader Joe's to make it easier on me, and I also toasted the pecans in some clarified butter. I could have just melted chocolate for the drizzle but opted to add some cream so that it would stay soft and smooth with every bite.

Blend together in a food processor until combined

Press oreo crust into the bottom and sides of a 9 inch springform cake pan.

Bake for 10 minutes and let cool.

Pour 1/2 cup of your best caramel sauce along the bottom of the crust.

Sprinkle chopped pecans over the caramel and set aside. 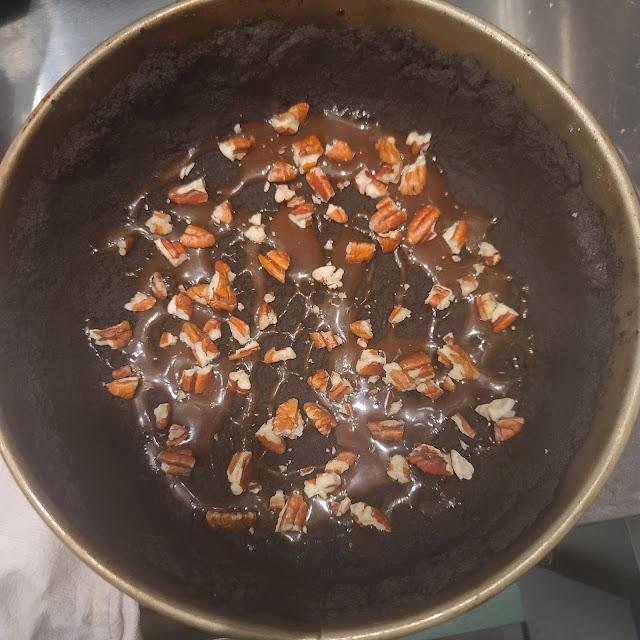 Beat the cream cheese, sour cream, sugar, and vanilla with a stand mixer until completely smooth and no chunks of cream cheese remain.

In a separate bowl, lightly the eggs, yolks, and cream together until combined and then pour it into the stand mixer while it's running.

Make sure to use a spatula and scrape from the bottom of the bowl to make sure it's properly blended.

Pour the batter into the springform pan over the caramel and pecans.

If you have a steam oven like I do, bake at convection, 325 degrees F with 70% moisture for 1 hour 10 minutes or until the middle is jiggly and the edges are set.

Let cool for an hour and then put it in a fridge for at least 2 hours.

Simmer the heavy cream in a saucepan over medium heat and then pour over the chocolate chips. Let it sit for a minute before whisking until blended.

On the day of serving, drizzle with a 1/4 cup of caramel sauce, chocolate ganache, and pecans.