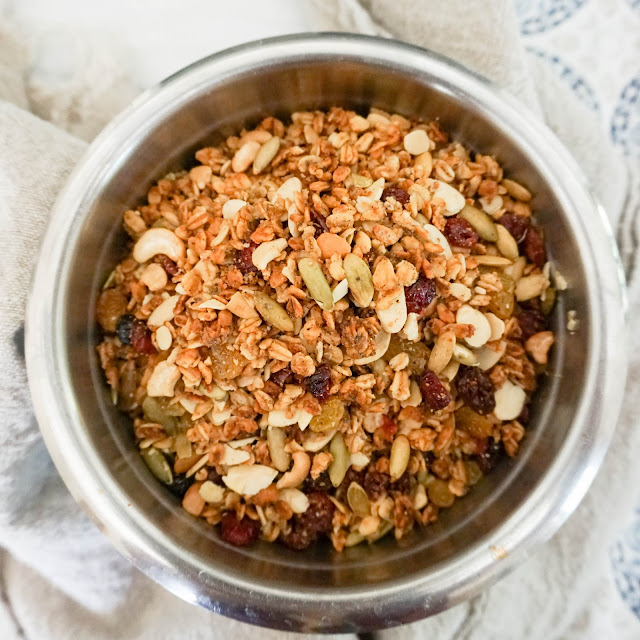 I confess I have never been a fan of granola, but now I will have to amend that statement to “I have never been a fan of store-bought granola.” This granola is magnificent with yogurt or even just eaten plain as a snack. I adapted it from my baking guru -- The Brave Tart. She does a great job of explaining each ingredients to making this perfect. The key is apparently buttermilk in the oats (I'm so new to granola I had no idea it was soaked in milk at all).

For my version, I added in some cardamom and vanilla add a nice bit of spice, and the whole batch together tastes toasty and not too sweet. I've also experimented with using a richer, stronger tasting olive oil and it just gives the granola a bit more complexity, in the best way.

This combo of dried fruit and nuts is my particular favorite. You can change any of the mix-ins according to your preference, and even omit the nuts entirely for a nut-free variation.

I've made this about four times and shared with everyone around me. They all become just as obsessed as I do! I've had to make it over and over because we are all ripping through it so fast. I've never eaten so much yogurt in my life, you guys. And it's so worth it.
The recipe may look complicated but it's not--tossing the oats in the oven takes a while but that's really the worst of it, and it makes plenty (but goes fast).

Also, the majority of ingredients are available at Trader Joe's, and you can order wheat germ online or get it at a regular grocery store. I was dismayed at the large size of it when I bought it but we will be making so much more granola, it will definitely get used up! 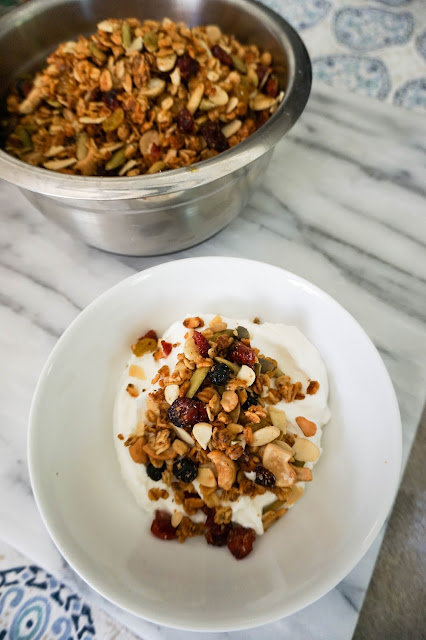 Crispy GranolaAdapted from a recipe at Serious Eats
About 9 cups

*I just use a bag called "Golden Medley" from Trader Joe's that contains all of these things! (Use the whole bag)*

In a large mixing bowl, combine the oats, wheat germ and chia seeds. Stir in the buttermilk and melted butter until evenly coated. Cover with a towel and set aside 20 minutes, until the oats appear dry.
Stir in the sugar, vanilla, cardamon and salt and toss to coat evenly. Cover with a towel and set aside 30 minutes, until the mixture looks loose and damp.
Meanwhile, preheat the oven to 350 degrees.
Spread the pumpkin seeds, cashews and almonds on a parchment-lined baking sheet. Bake 10 minutes, until fragrant and beginning to brown. Transfer to a large mixing bowl, toss with the oil and stir in the blueberries, dried cherries and raisins. Set aside.
Reduce the oven temperature to 300 degrees.
Spread the oat-mixture in an even layer across the same baking sheet. Bake 75 to 100 minutes, stirring the granola every 20 to 25 minutes, until the oats are toasted and dry.
Add the toasted oats to the dried fruit and nuts, stir to combine, then return to the baking sheet and let cool completely. Transfer to airtight containers. The granola can be stored for several weeks at room temperature.
Labels: almonds blueberries buttermilk cardamom cashews cherries chia seeds dried fruit granola oats olive oil pumpkin seeds raisins vanilla wheat germ