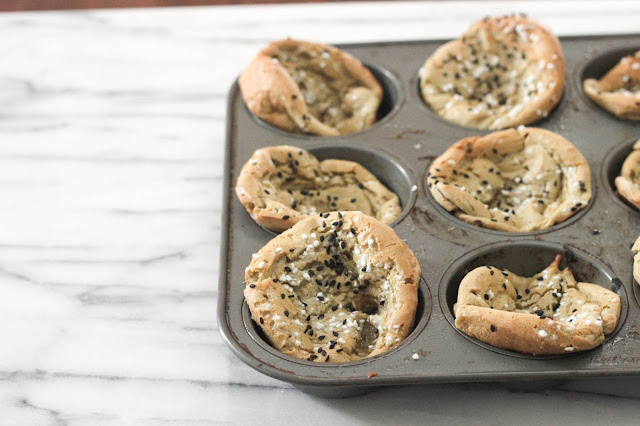 The moment I read about Nun’s Puffs, I knew I had to make them. Also known as Pets de Nonne or Nun’s Farts (yes, really), they practically melt in your mouth and look like individual Dutch babies: soft, fluffy and egg-y.
Typically these are served as a savory breakfast treat with jams or honey. I wanted to try them as a dessert, though, so I added some sugar to the dough. Since these were served after an Asian-inspired meal, I carried that influence to dessert by adding matcha powder and sprinkling it with black sesame seeds. A final flourish of pearl sugar added the best crunch. 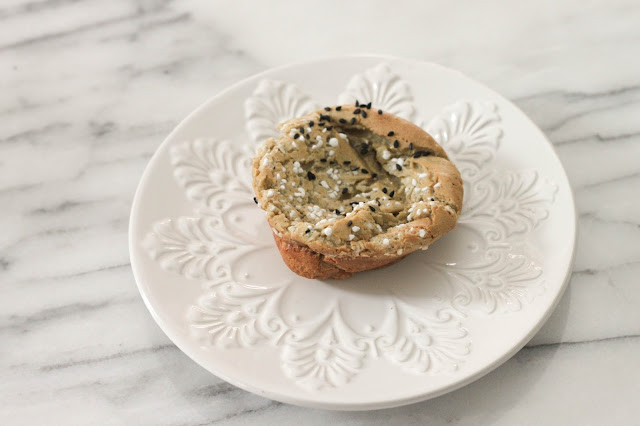 You could very easily eat all of these in one sitting. They are that addictive. The dough is essentially a pâte à choux – the same dough for cream puffs and éclairs – only five or so ingredients.
These would be a great addition to a brunch at home or something to snack on a lazy Sunday morning in.
Feel free to omit the sugar and smear some honey instead, for breakfast in lieu of dessert. They're also best eaten warm, fresh outta the oven.
Listen while you bake: Jump Hi by Lion Babe
Matcha Nun’s Puffs
Adapted from Olga’s Flavor Factory
Makes 12
½ cup (1 stick) butter
1 cup milk
½ cup granulated sugar
¾ cup minus 1 Tbsp. flour, sifted
1 Tbsp. matcha powder, sifted
4 eggs
Coarse or pearl sugar for sprinkling
Black sesame seeds for sprinkling
Preheat the oven to 375 degrees.
Coat a 12-cup muffin pan with nonstick spray.
In a saucepan over medium heat, stir together the butter, milk and sugar until the butter is melted and the sugar is dissolved.
Remove from heat and quickly whisk in the flour and matcha powder until a dough forms.
Use an electric mixer on medium-high speed to beat in the eggs 1 at a time until the dough is smooth and lighter.
Divide the dough evenly between the muffin cups.
Sprinkle with coarse sugar and black sesame seeds.
Bake 30 minutes, until puffed and golden on the edges.
Let cool slightly (they will deflate as they cool) and serve warm.
Labels: black sesame seeds green tea matcha puffs