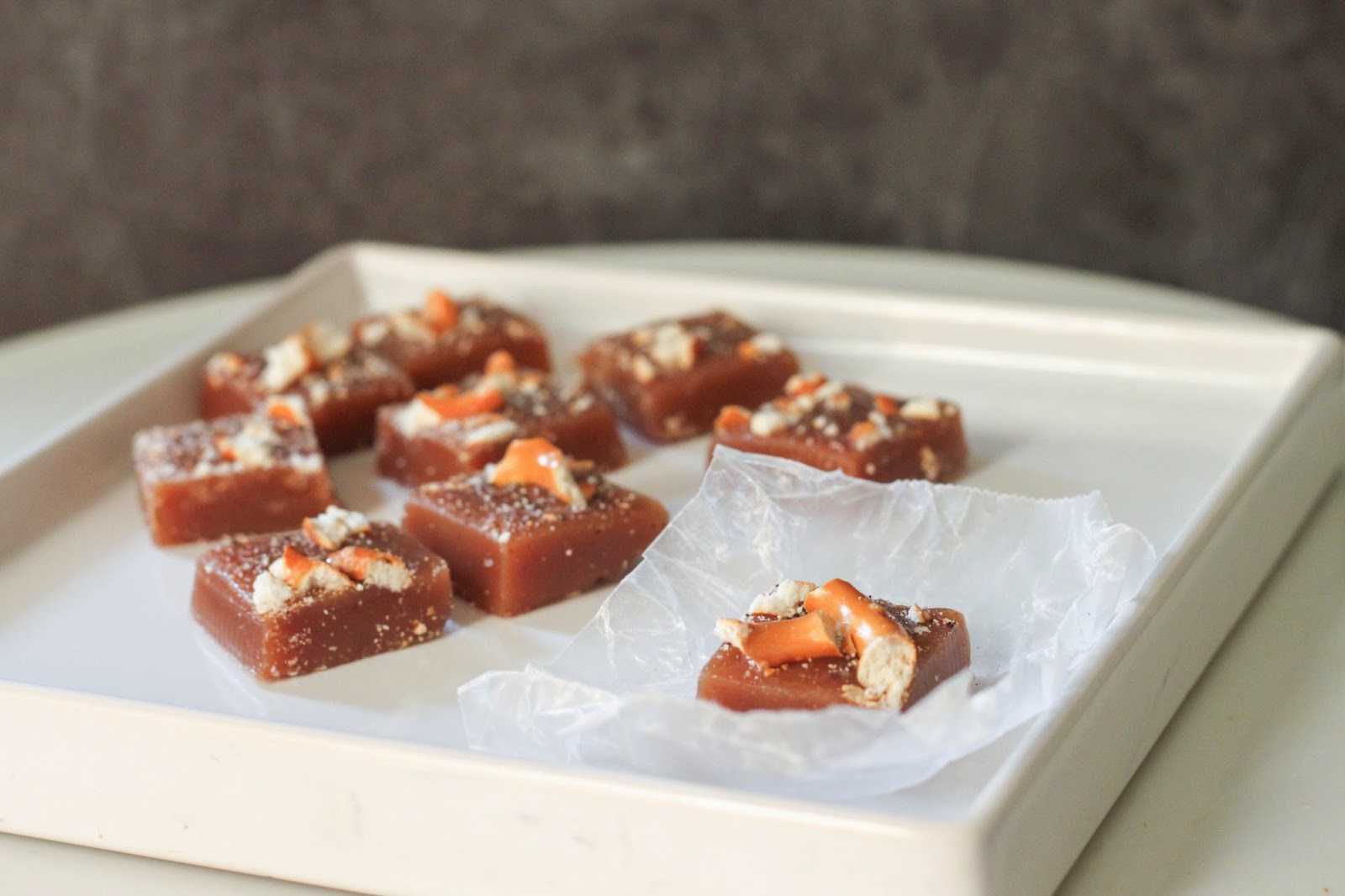 Hello, friends!
It's the polar vortex over here and I'm writing this with cold hands and warm feet. I've been setting up our new home--so many things are yet to be done but it's coming along nicely. I'm rather proud of ourselves, especially since I was never that good at decorating/knowing what colors go with what. But after poring over endless articles on Houzz and looking at photos on Pinterest, arguing over duvet covers and wall art, I needed to take a break for a bit. 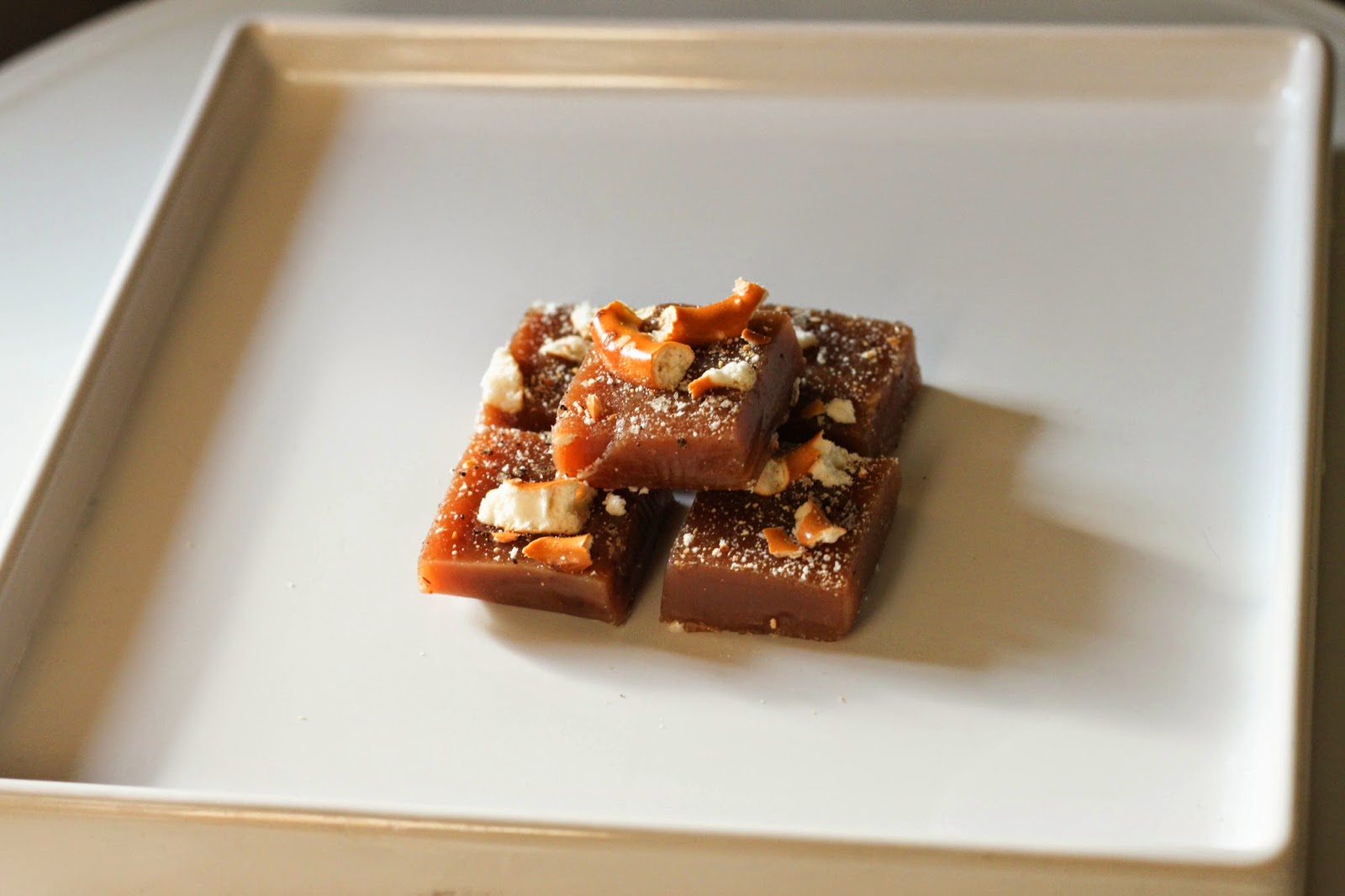 And I've ended up filling that break with episodes of Serial, a new podcast Joe and I are hooked on. It's fascinating to listen to and discuss, mainly because it gives you a hard glimpse of the justice system and how terrifying it can be. I highly recommend it.
I've always been nervous about making caramels from scratch. I've messed them up on many occasions and wrote them all off a couple years back. But when I read this post by Butter Me Up Brooklyn about how she went through the same frustrations, I thought I'd give it a shot again. 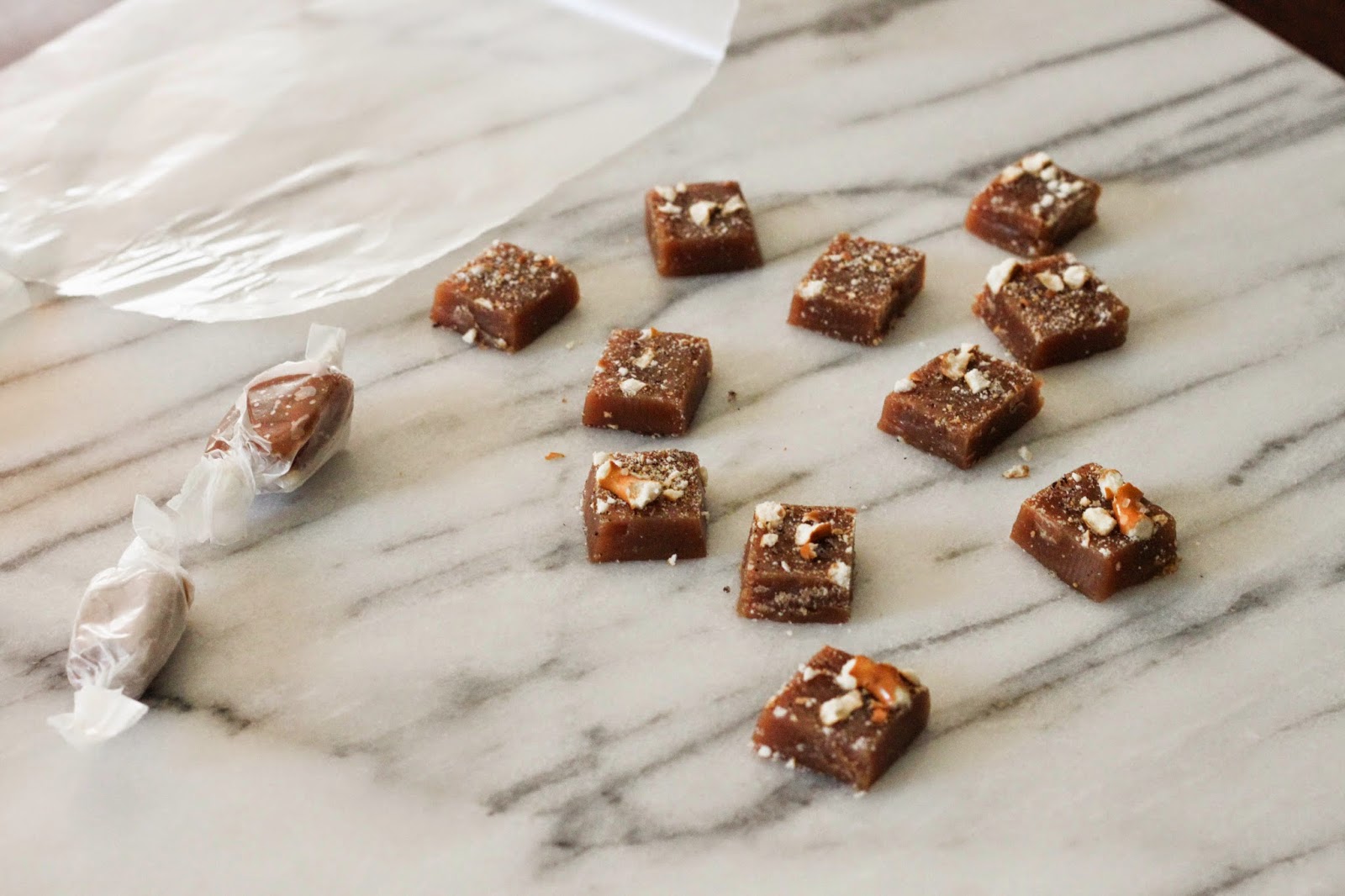 Guys, if you have a candy thermometer, you can totally do this! It's a bit too difficult without one but the good news is that they're fairly cheap and you can use them for a variety of baking so it won't be useless. Make marshmallows! I use mine mainly for macaron fillings but I decided to pull it out for this recipe and it worked perfectly. Even as I poured the caramel into the pan, I was certain I had messed up somewhere and that it would harden into a jawbreaker, but it didn't.
These stayed perfectly chewy and would probably be softer if it wasn't freezing temperatures outside.
I love the addition of beer to the caramels. The candies definitely aren't purely sweet--the beer adds a robustness to it, and makes it a bit darker than your typical caramel. The crunch of the pretzels is just perfect, and I added some sea salt to boot, since that's kind of my MO.
Make these on a lazy afternoon and you'll have the perfect gift for a friend. They last for weeks (months?) at room temperature and it's been fun to hand them out to random pals who aren't expecting it. I was thinking of saving these for Christmas but I much rather prefer keeping them around for when someone visits or pulling them out at the end of a dinner party. 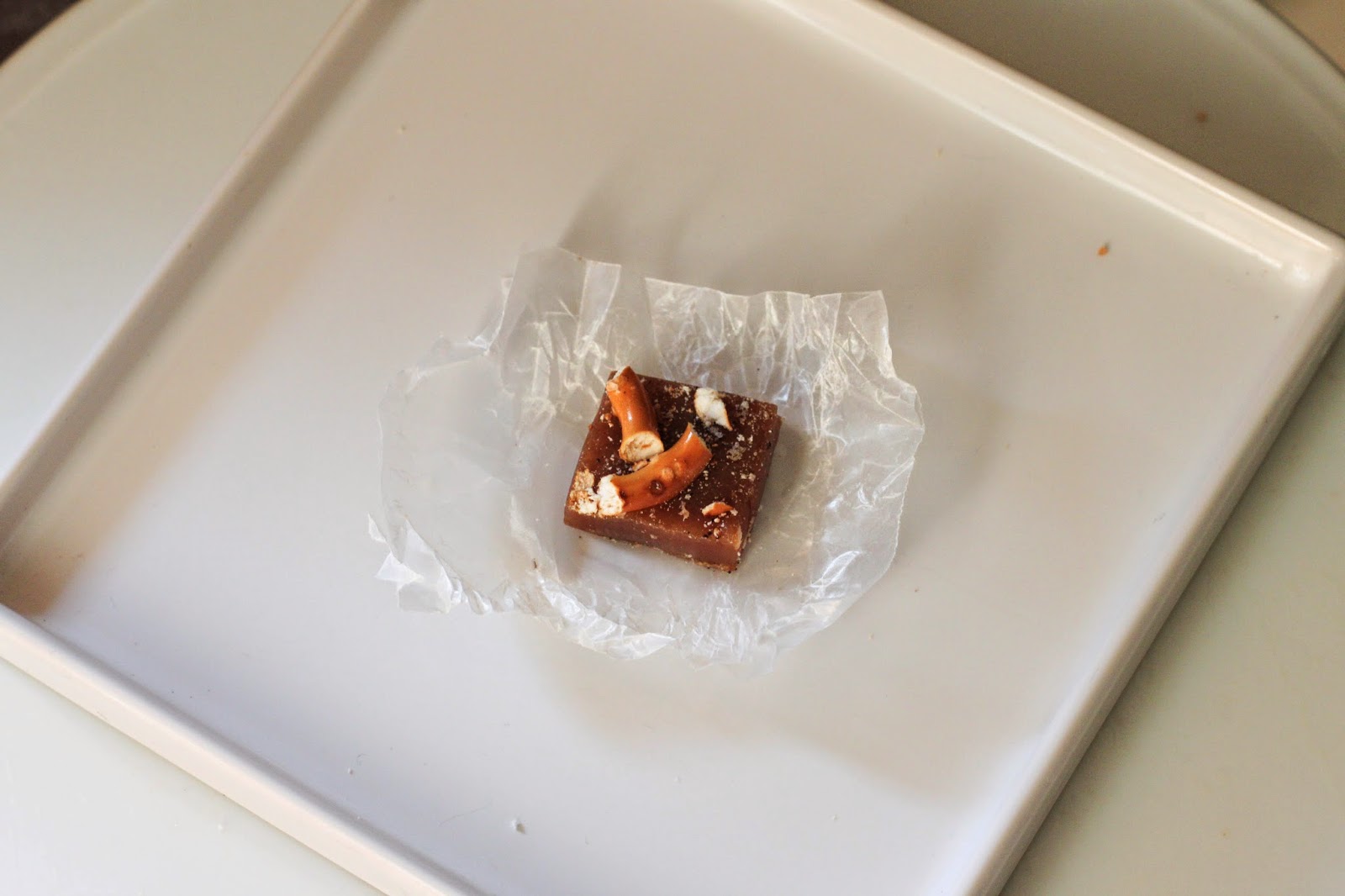 In a medium saucepan set over medium-low heat, simmer the beer for 30 minutes or so, or until it has reduced to 1 tablespoon. Give the pan a swirl every so now and again and keep a close eye on it as it begins to really reduce in volume. Turn off the heat and measure out a tablespoon of the beer syrup into a small bowl.
Add the vanilla and set aside. Meanwhile, prepare all your tools since once you get going you will need to work fast.
Butter and line an 8×8 pan with two overlapping sheets of parchment and butter the parchment.
Dig out your candy thermometer. Find a whisk and heat-proof spatula. Get your biggest pot down from the cabinet.

In the saucepan where you made the beer, combine the cream, butter and salt. Heat the mixture over medium-low heat until the butter melts, then remove from the heat, cover, and set aside.

In your largest pot, stir together the sugar, corn syrup and water, make sure there's no sugar crystals on the side of the pot. Clip on your candy thermometer and make sure it is fully submerged in the sugar. From this point on, do not stir the sugar!!
Set the pan over medium-high heat and let the syrup come to a boil without stirring.
Watch your thermometer – at around 250°F it will begin to boil rapidly. Turn off the heat at 320 degrees F.

While whisking the syrup gently, slowly pour in the warm cream/butter mixture. Stop whisking when all the cream has been added. It will bubble up and rise so be careful.

Return the pan to medium-high heat and let the caramel come to a boil without stirring. Watch the thermometer closely and when the caramel reaches 248°F remove from the heat and quickly whisk in the beer syrup and vanilla until just combined.
Immediately pour the caramel into the prepared pan. Tap the pan against the counter to remove any air bubbles.
Sprinkle with crushed pretzels and flaky salt.
Let the caramels sit at room temperature for several hours until fully set.
Then remove from the pan, slice into tiny squares, and wrap each candy in wax paper, or place in a container.
Store at room temperature.
Labels: beer caramel caramels guinness pretzels sea salt