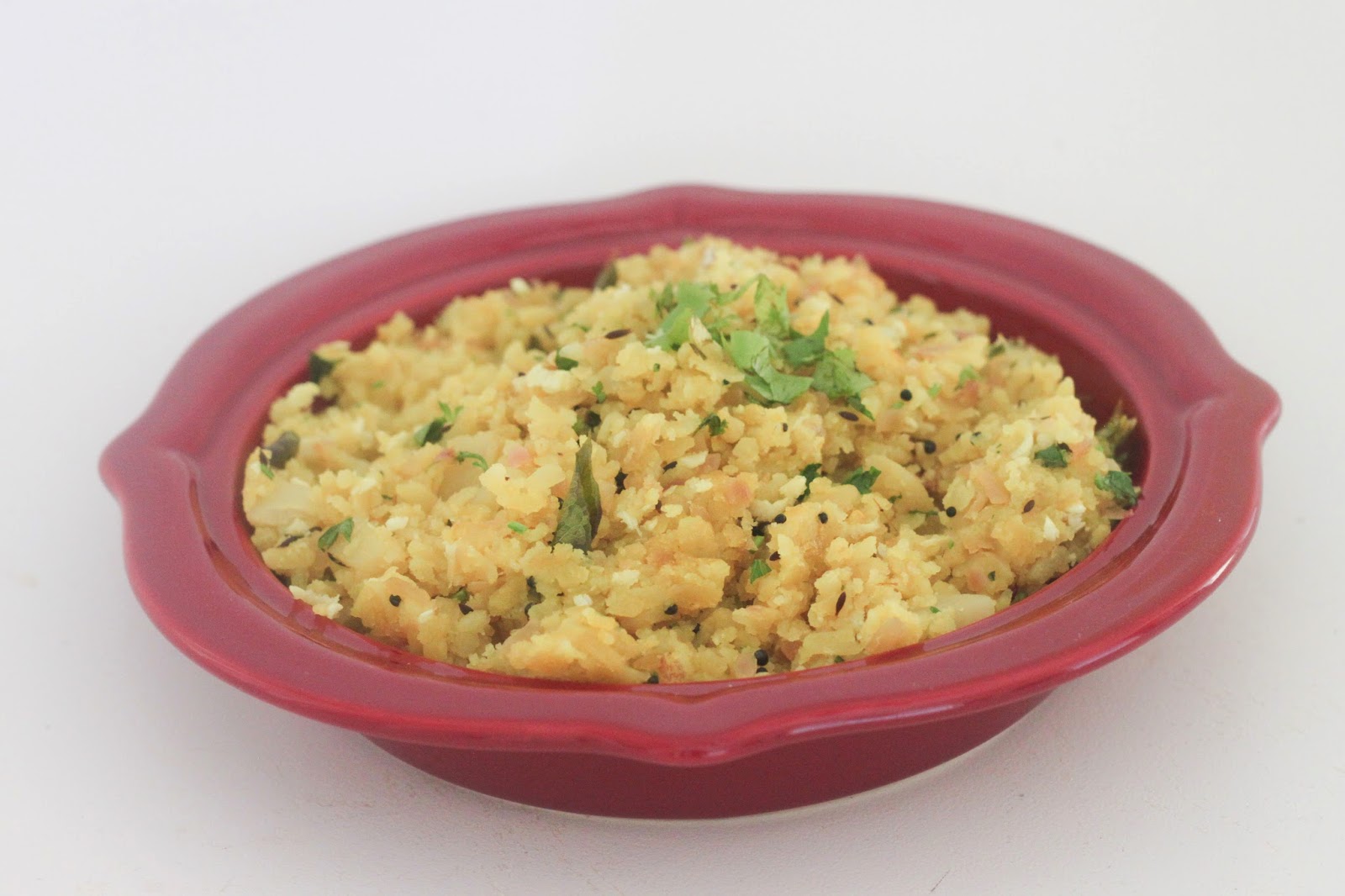 I recently read a very interesting book called Sweet Invention: The History of Dessert. Instead of discussing just sugar or specific ingredients, the book goes in depth about how desserts evolved over time and how tracking its evolution also teaches you about the history of the world and each culture within it.


For instance, the faint lines of the Ottoman empire are clear when you look at the countries that proudly sell baklava. The mix of similar pastries between Italy and France when the Medicis ruled in France. The milk (and sugar) basis for all Indian desserts that may explain why cows are so revered.


I found the India chapter especially fascinating because I grew up eating a lot of those sweets without having much of an idea of what I was eating. I didn't even realize that sugar originated from India until recently (not that I'm surprised--Indians have a mayjah sweet tooth).
The book also discusses the influence of Persians and Europeans on Indian desserts, and how Persians added their perfumed twist on it (rosewater!).

And the French love a texture of crispy and creamy, which explains their penchant for eclairs and macarons. They also prefer small, delicate and "luxurious" desserts which is apparent in their boutique-style sweet shops.

The chapter on America was a little sad. It detailed the start of Hershey's and how the inventor wanted to make something cheap enough for kids to buy, so he used the cheapest possible ingredients. So that despite the slightly grainy mouthfeel that Hershey's gives off (I'm not a fan), it would make Americans feel nostalgic and keep them coming back for more. It's not about the product, it's about how the product makes you feel.

Although I checked it out from the library, I'm probably going to buy it because I'd love to read it again. I highly recommend it for any foodie/history buffs out there!

I was born in Mumbai, India. My mother's side of the family is Konkani, which are group of people from the Konkan coast in western India. More specifically, we are CSBs--Chitrapur Saraswat Brahmins--from the priest caste.
Fun fact: Konkani is not a written language, only spoken! I understand it fairly well but I'm terrible at speaking it.

Although I was raised speaking Hindi primarily because of my dad, and then raised mostly in the US as an American, I grew up around Konkani food for most of my life, and it's my favorite.

When asked about Indian cuisine, most non-Indians will name chicken tikka masala or palak paneer, but that's North Indian.
Konkani food varies--the Christians eat lots of fresh fish from the coast, as well as other available meats and add a ton of hot spice to everything. The hindus (my family) tend to be vegetarian so I haven't had much exposure to any meat dishes in Konkani cuisine. 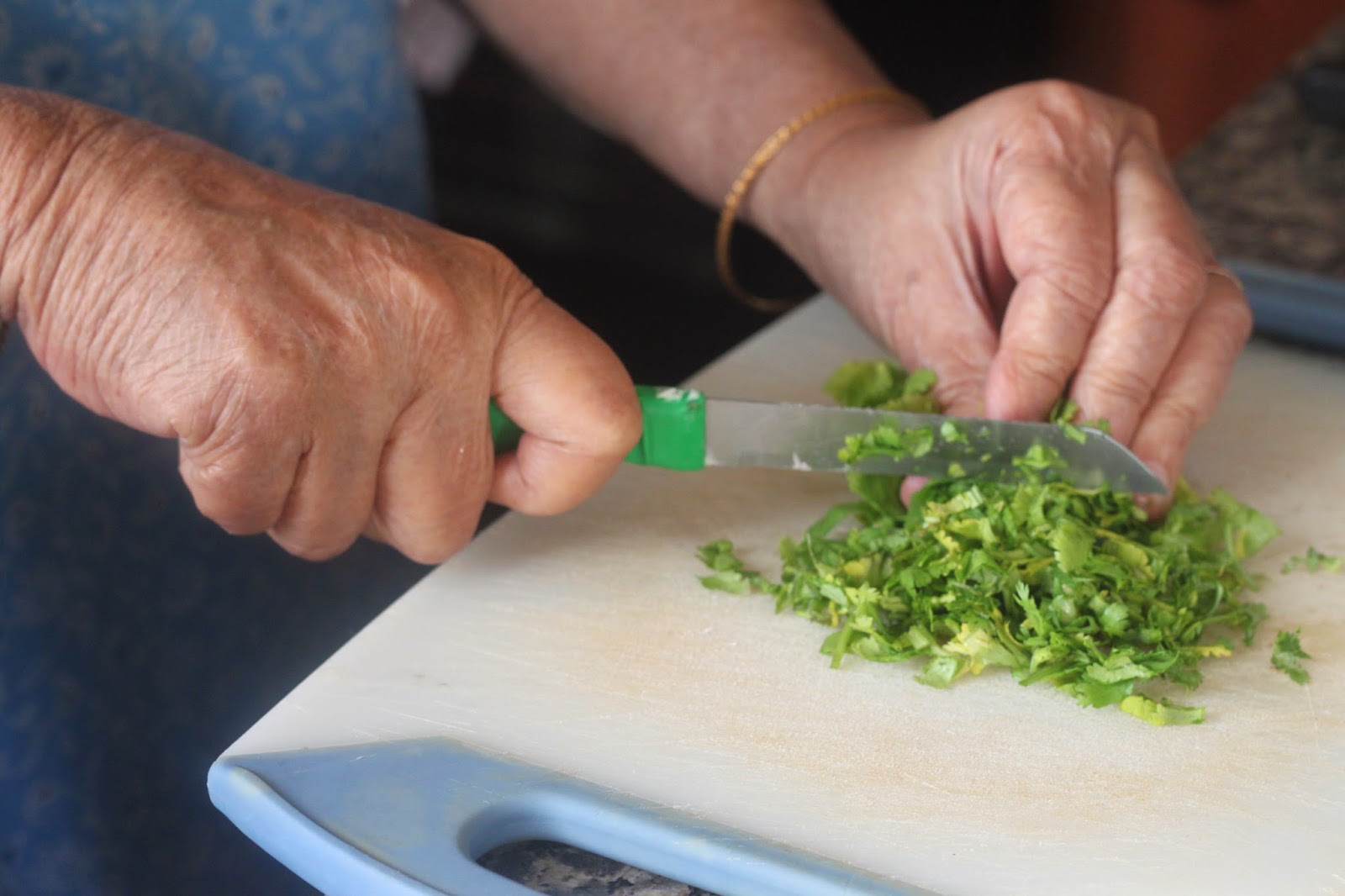 My favorite part of Konkani cuisine? Coconut. Ground coconut can be found in almost everything. I'm not a fan of coconut desserts but I love the taste of it in savory dishes. It makes the dish light but flavorful in a special way.

When I was home this past week, my grandmother was visiting from India. She made a lot of my favorite dishes (winter gourd lentils!) but I wasn't there for the preparation of them. So when she planned to make me some poha, I asked her to make it the afternoon so that I could photograph it in natural light. She agreed, even though it was in the middle of one of her favorite shows "Wheel of Fortune". I'm so glad she did. 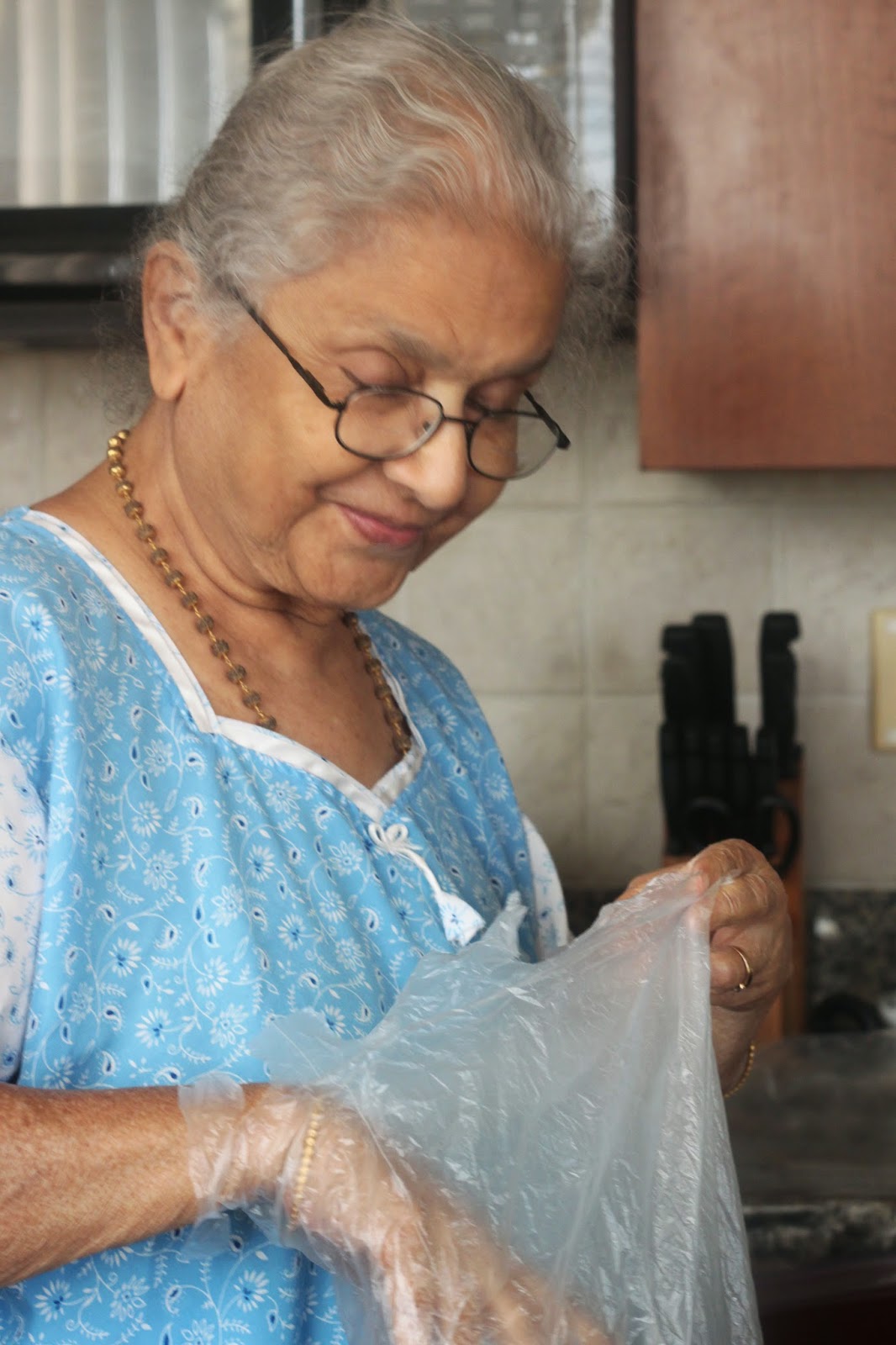 Poha is made of flattened or "beaten" rice. It's great for making a light snack either for breakfast or in between meals. I've often woken up to a bowl of this in the morning, but I had no idea it was so simple to put together.
I loved making this with her and I brought home a big bag of flattened rice to make some more. 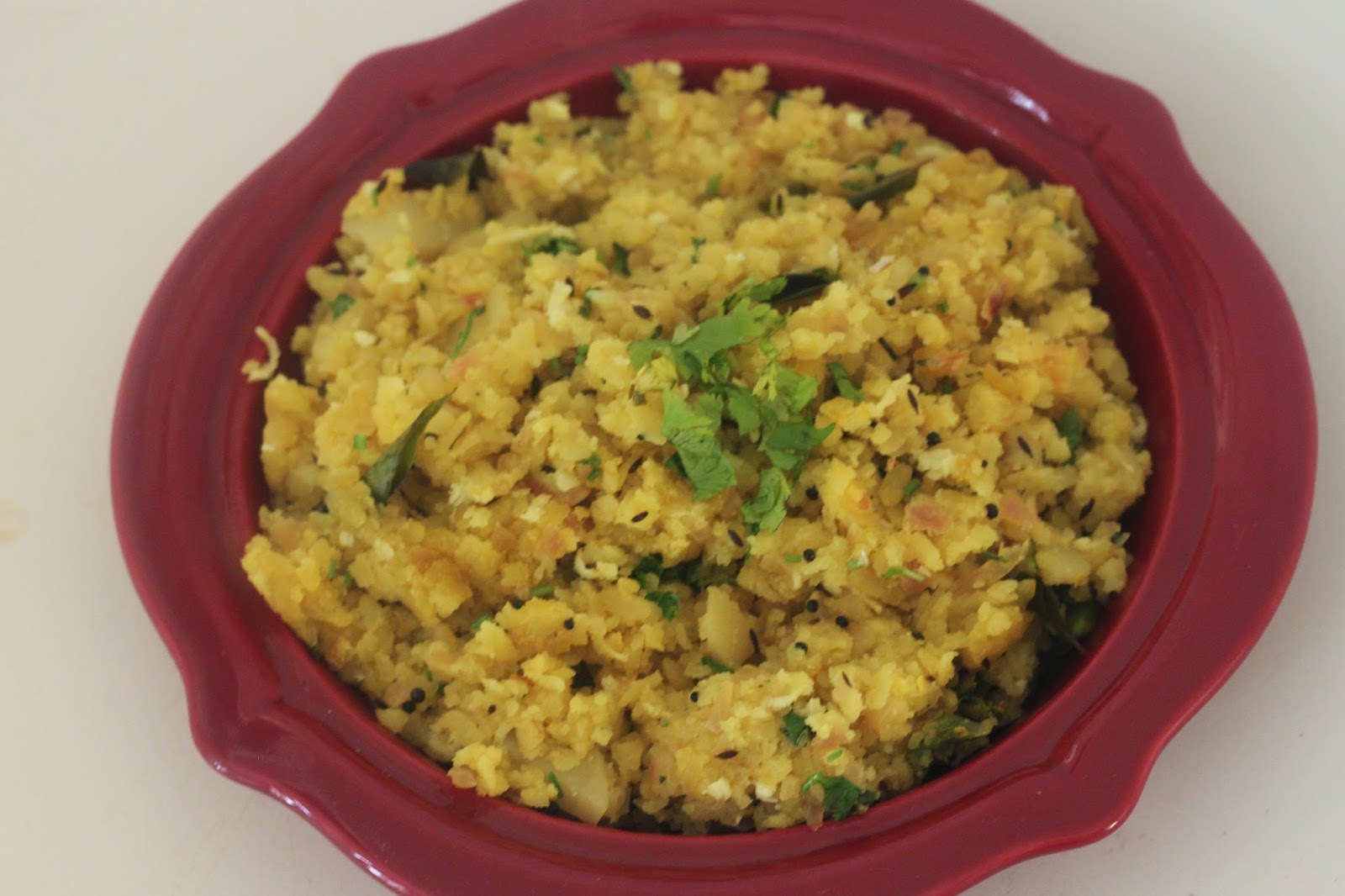 Here is her recipe:

*All measurements are approximate (follow ye tastebuds)
*I like to eat this with ketchup (don't knock it till you try it!)
*It's also delicious with sev sprinkled on top


Poha
Serves about 3-4 for a light snack

5 ounces dry flattened rice (Poha)
small handful of cilantro
1 1/2 tbs coconut oil
1 1/2 tsp cumin
1 1/2 tsp mustard seeds
1 green chili
2-3 curry leaves, torn in half
1 small onion, finely chopped/minced
1 small boiled potato, chopped into small cubes
1/2 tsp turmeric
1/4 cup water
3/4 tsp salt
3/4 tsp sugar
2 tbs grated (unsweetened) coconut
Quarter of a lemon (about 2 tsp juice)
Rinse the rice and set aside in a bowl (it should be moist but not saturated with water).
Rinse the cilantro well and set aside.
Heat the oil in a saucepan. Once hot, add the mustard seeds and cumin and let sizzle.
Once the sizzling dies down a bit, Tear up the curry leaves and add it to the pot.
Add in the sliced green chili.
Add in the onion and stir well.
Cook until the onions become opaque.
Add in the turmeric and stir well.
Pour in the water and then add the potatoes and add salt.
(you need the water so that the salt will absorb into the potatoes).
Add in the sugar and stir well.
Set sit for a few minutes on medium to low heat until some of the water evaporates.
Add in a little bit of water if it looks too dry (it should look wet and mushy).
Switch heat to very low.
Stir in the dry rice last, combining well.
Add a bit of water if it's too dry to combine properly.
Put a lid on it for 2-3 minutes (in the meantime, chop up the cilantro, finely.)
Take off the lid and stir in the coconut.
Stir in the lemon juice and then add the cilantro last.
Add in salt, to taste.
Serve warm or at room temperature, and keep stored in the fridge for up to a week.
Labels: breakfast indian food poha savory