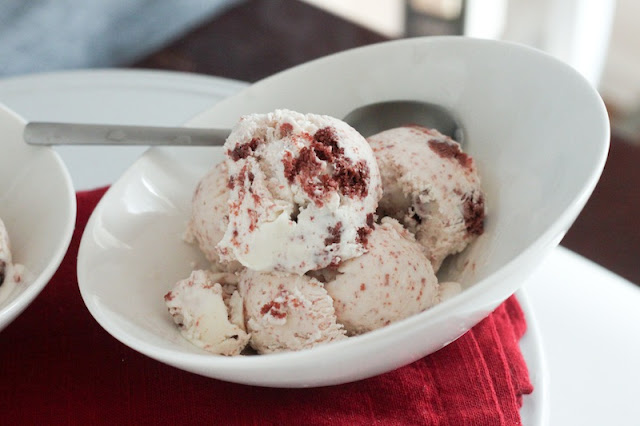 This past weekend, one of my favorite couples, Sumee and Neil, came to visit. We hardly get to see them and often have to plan our trips far in advance. We usually meet in random cities so this was the first time they would get to stay with us. Joe was a little bit worried because Neil is a vegetarian and Sumee only eats chicken and fish--my boy loves meat with pretty much every single meal of the day.
We didn't run into any dietary problems though, and by the end of a very delicious food-filled weekend, I think I might actually want to, *gasp* try being a vegetarian.
I've realized that I don't notice whether or not meat is on my plate. It's not something I have to have, but it's something I enjoy and occasionally crave. I don't often think twice about it.

My grandmother is the only vegetarian in my family. When I lived with her, I was never healthier and completely forgot about meat (good Indian cooking will do that to ya).
I generally grew up eating fish and chicken, only discovering steak in my late teens.

When I first moved to St Louis, I was surrounded by meat eaters. Joe and his past roommate found it unthinkable to have a single meal without meat and constantly cooked ribs and duck and steaks and chicken wings.
For someone who didn't even know how to cook (or touch raw meat), I learned a lot over those two years. 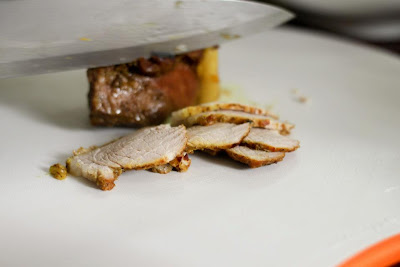 This weekend coincided with a book finally being available at my local library--Gwyneth's Paltrow's controversial new book, that my food blogger friend wrote a lovely post on recently that I agree with whole-heartedly. Despite the haters, a lot of these recipes look absolutely delicious. Even if I can't afford to go completely organic or find all the specific ingredients, there are some great ideas in there for meals.

Anthony Bourdain, who is one of my favorite world travelers/writers and famously hates on vegetarians and vegans, posted this on Twitter recently. His wife decided to go vegan for 7 days and even though he did not approve, she did end up enjoying it...for the most part (it's hilarious, you should read it). 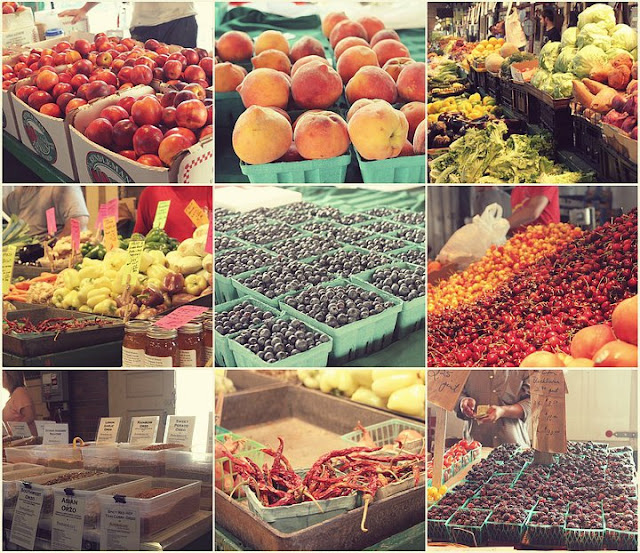 Living in St Louis has also helped me evolve my beliefs in food. Working at a farmer's market showed me all the fresh produce that's out there, and how satisfying fresh, seasonal fruits and veggies can taste. And befriending people who love to grow their own vegetables (Lulu's!) and try to live sustainably (Whisk!) is even more motivating. 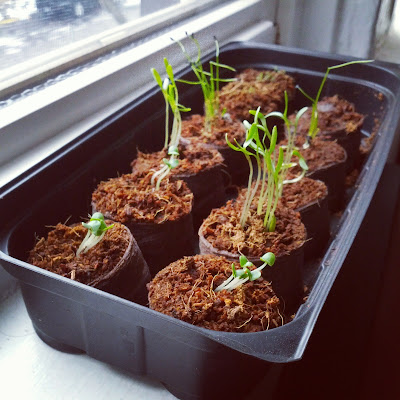 Joe and I are working on growing our own herbs at the moment
On top of all this, Michael Pollan's new book is coming out soon, and reading articles about it is inspiring me to be more careful about what meat I choose to eat, and how important it is to know where it comes from. I don't think I could ever completely go vegetarian for good, but I can definitely cut down on my meat intake and be more aware of the sources.

Ultimately, learning about new vegetables and how to cook them, is rather fun--I see it as a bit of a challenge. As someone who went from being very picky about food, to trying everything at least once, to actually experimenting with new and unusual flavor combinations in terms of desserts, I'm very much looking forward to expanding my skills to cooking.

BUT I would never go vegan because I love my eggs too much.
And thankfully, I have the best boyfriend in the world because even though he loves meat so much, he's willing to cut down on it to make our joint meals easier.

Aaaanyway! One of my friends is obsessed with red velvet cake in any form and I know there are many of you who are the same way. Truthfully, I didn't get the appeal of red velvet cake until I had one at Sprinkles. I loved that it was a dark, deep red from the cocoa, not shockingly red as most of them are. The cake was moist and had a small hint of chocolate, perfectly accented with a tangy frosting. Of course, I often have to knock off most of the frosting because I find it way too sweet, but the cake is still my favorite.
Now, I can't help but try red velvet cake at every bakery I go to...I've become that girl.
I was thrilled when I finally found a recipe for the cake that matched Sprinkles. I made the cupcakes for my friends' proposal in the cabins in February, but the batch made about 30 and there were only 7 of us in the cabins. So I froze a few for another use.

I used some of them to make these red velvet bars, and I still had 6 left over. Cheesecake ice cream with red velvet cake was another concept I had scribble-scrabbled on some paper months ago in a fit of inspiration. So when my friends planned to visit for a weekend, I knew it would be the best time to experiment with the rest of the cakes. 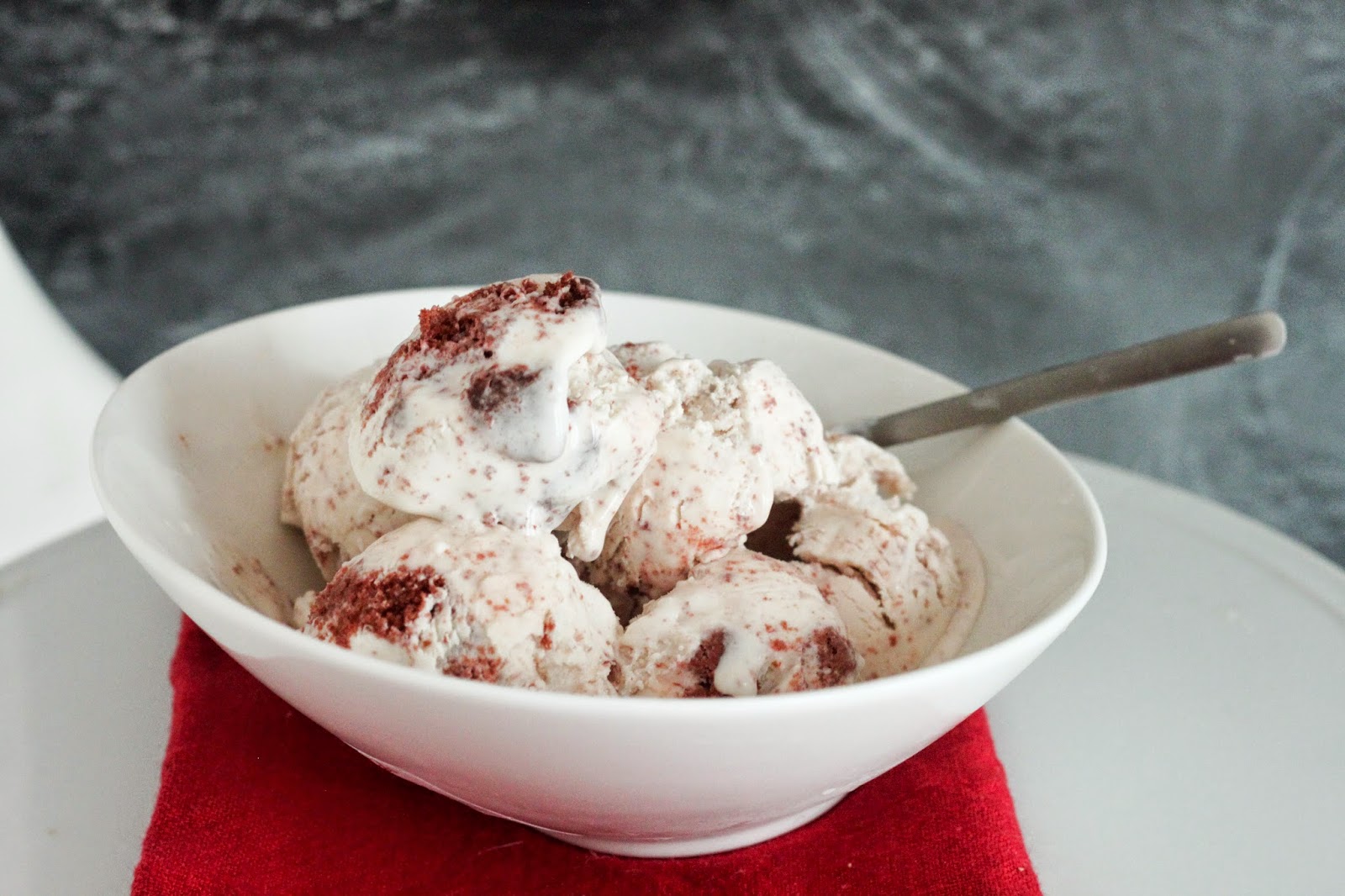 The ice cream recipe comes from David Lebovitz and he never disappoints. It's a luscious, not too sweet, very tangy ice cream with few ingredients. It's rich and tastes exactly like cheesecake. I chopped up the frozen cupcakes into cubes and tossed it into the ice cream machine while it was churning. The cake turned soft and melts in your mouth with every bite. I'm not a fan of cheesecake but I could eat more of this than I'd like to admit.

We spent the entire weekend touring StL and stuffing our faces so much that it was only on the last day of our friends' visit that we realized we hadn't gotten to the ice cream, which was what Neil had been looking forward to the most. Right before the trip to the airport, the four of us sat on my bed in silence (only broken by the sounds of our spoons clinking against the bowls), savoring every bite.
The first words out of my friend's mouth was to fervently suggest I sell this to The Cheesecake Factory. 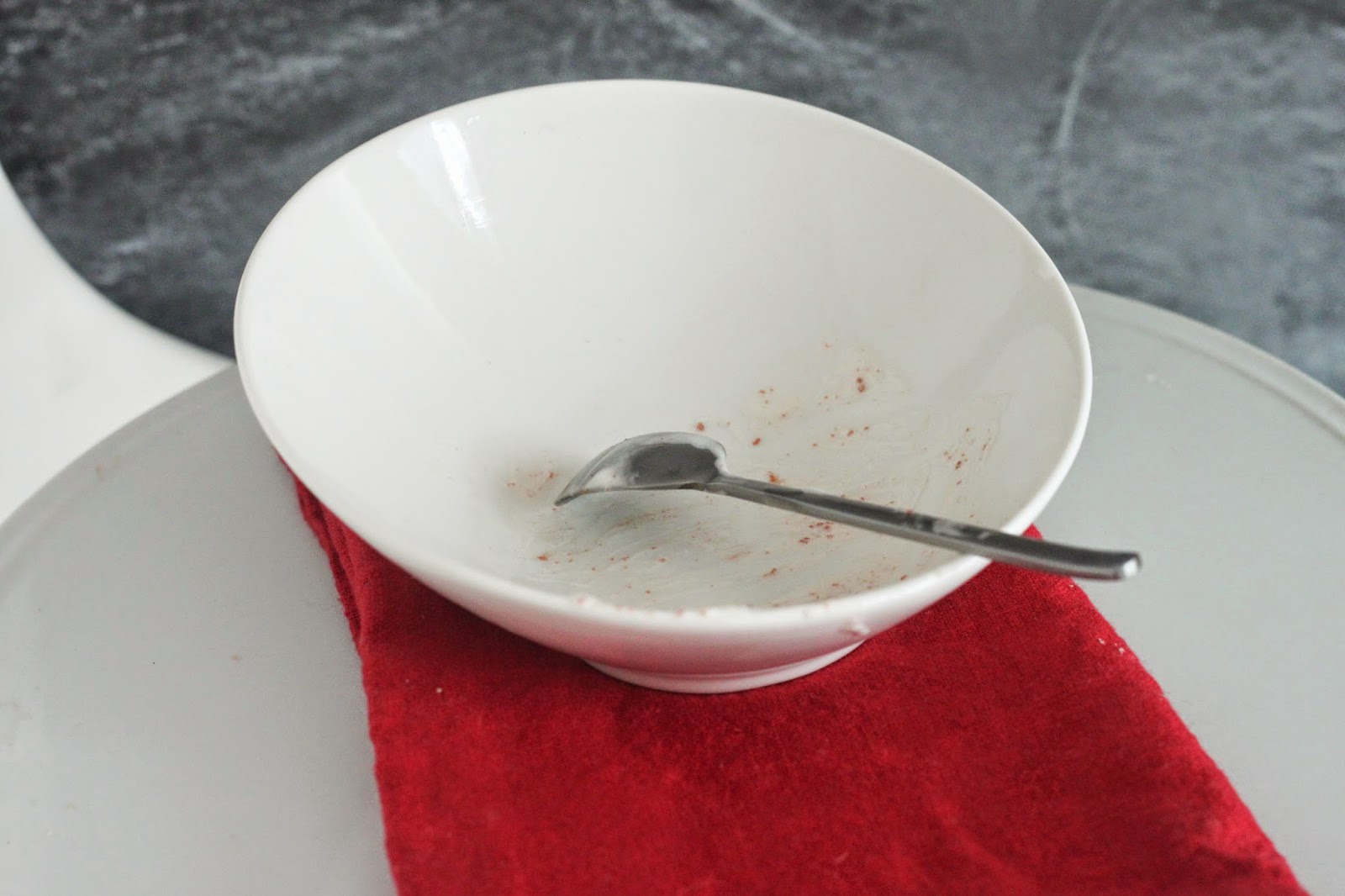 Use a powerful blender or food processor and toss all ingredients in.
Puree until smooth and then chill thoroughly in the fridge.
Freeze it in your ice cream maker according to the manufacturer's instructions.
Add in the cake in the last minute of churning, or fold it in after removing from the machine.
Store in the freeze in an air-tight container for a couple of hours before serving.

Preheat oven to 350 degrees F.
Sift the flour, cocoa, baking soda, and salt in a bowl.
Beat the butter and the sugar together in a stand mixer for 5 minutes until light and fluffy.
Add in the eggs, one at a time and beat well after each addition.
Scrape down the sides of the bowl if necessary.
Add in the extract, followed by the sour cream, coloring, and buttermilk.
Gently fold in the dry ingredients until combined.

Pour batter into cupcake pans lined with wrappers and bake for 18-20 minutes or till a toothpick inserted into the center comes out clean or with a few crumbs attached.

Let cool completely and then individually wrap and freeze (depending on how many you decide to use for the ice cream, nibble on the rest).

Once frozen, use a sharp knife and cut the cake into little cubes.