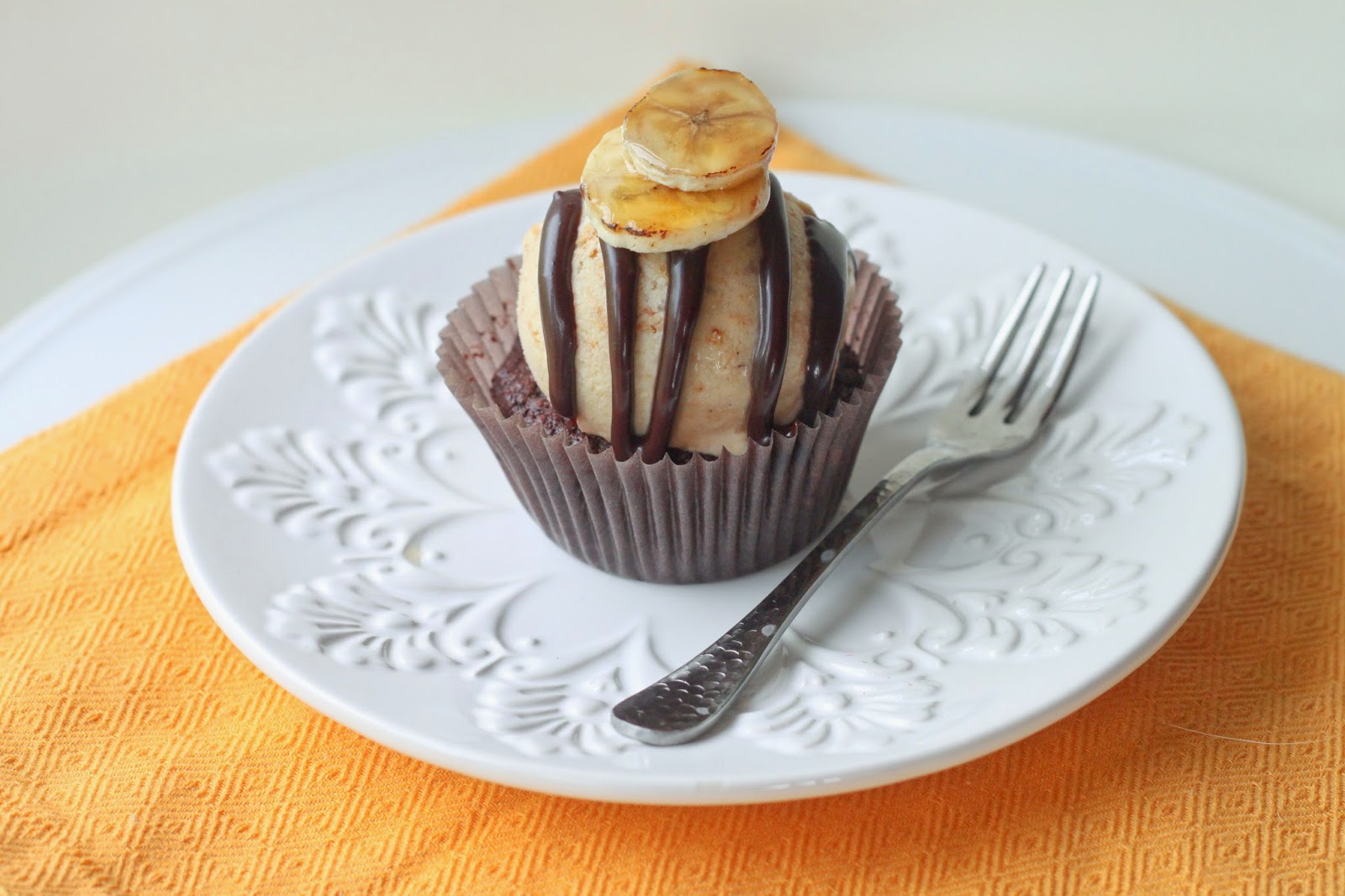 It was only this year that I heard about Cupcake Project's annual Ice Cream Cupcake Contest. I have no idea where I was the last two years, but the second I read it on her blog, I was super psyched to submit something. It's so fun to have a contest such as this to inspire you to try something new, regardless of winning. Check out the current entries; people have some of the coolest ideas, teehee...

I hardly ever make cupcakes, and when I do, they're often typical flavors by request that have already been posted on the blog, so it's been a while since new ones have made the cut. 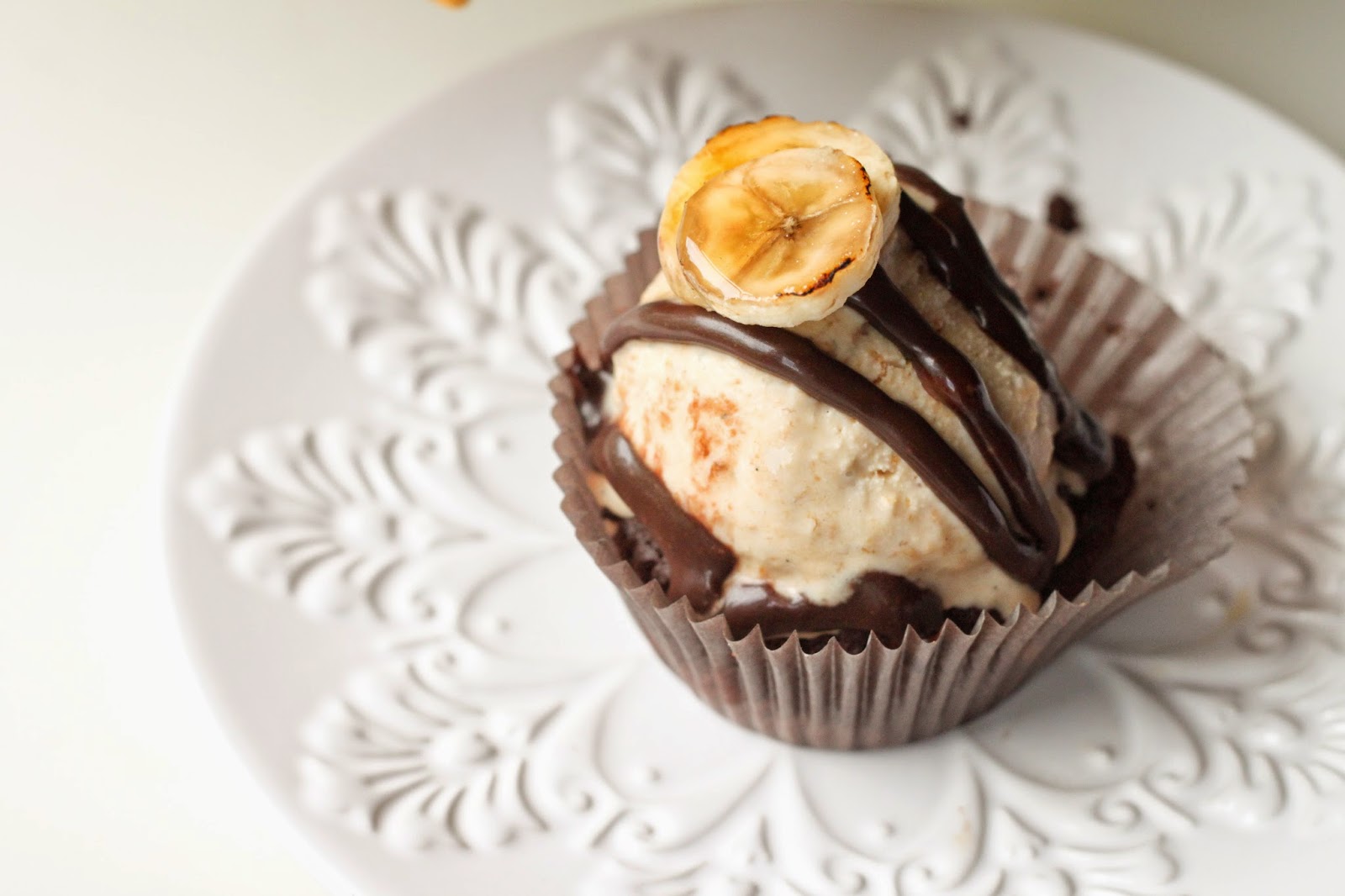 My original idea for an ice cream cupcake was going to be something combining mango and lime. Mango and lime just scream summer to me, and remind me of my favorite drink from Ben & Jerry's--the mango lime sorbet (apparently mango ice cream + Sprite = the best drink evarr) that they stopped making long ago. They turned it into some sort of fat-free sorbet, pfft.
Aaaanyway, although that was the direction I was heading, I basically did a 180 and ended up making the complete opposite of a mango lime ice cream cupcake. 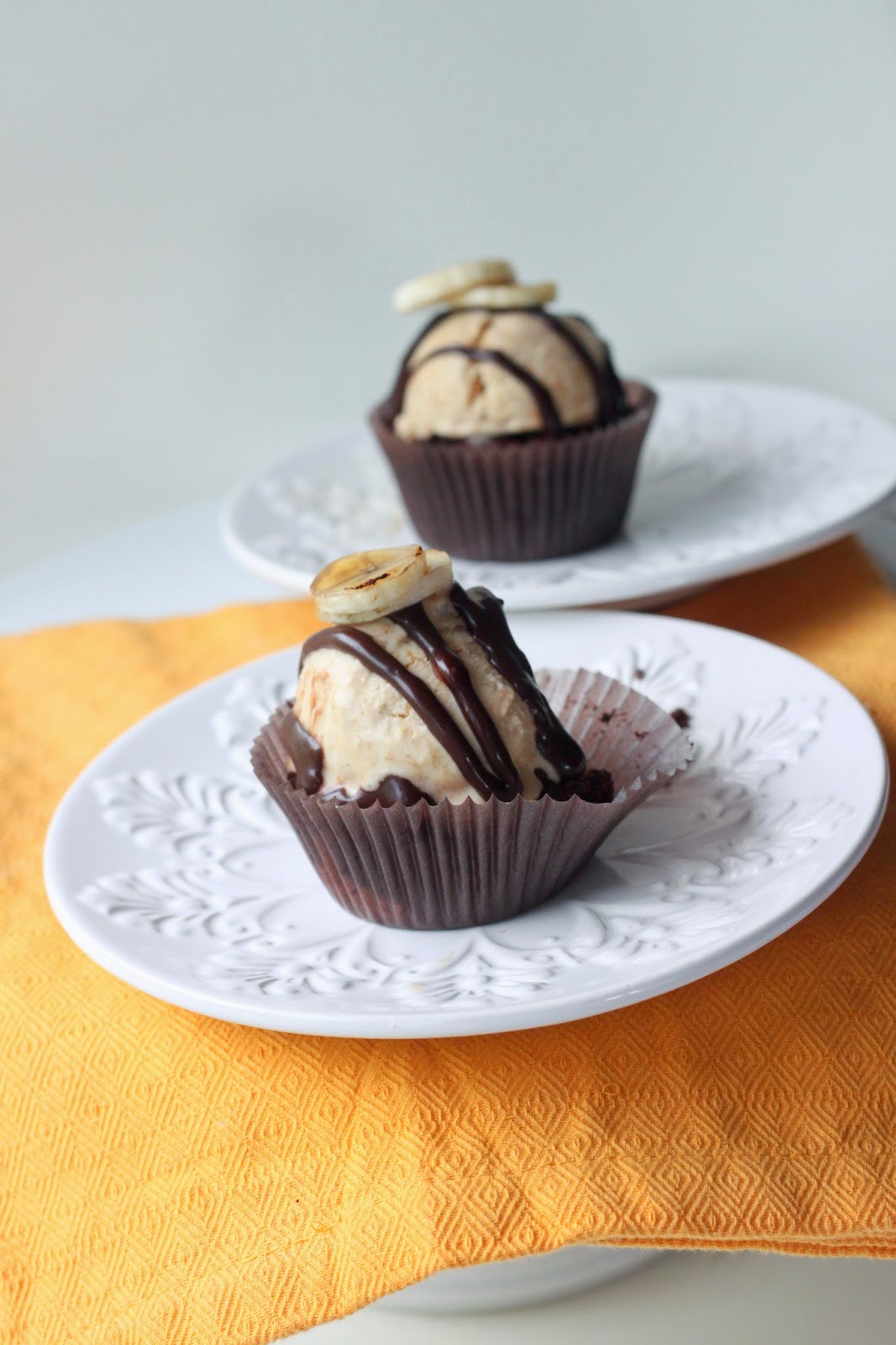 A deep, rich brownie-like flourless chocolate cake, combined with a creamy banana ice cream swirled with white chocolate caramel. Topped with some salted hot fudge, and garnished with some caramelized banana slices.
I'll let that sink in for a minute.

I had made the banana ice cream a week ago, and used it for macaron ice cream sandwiches that I served at the market. They ended up selling out and I had a lot of people take the time to come back to my stall to tell me how much they enjoyed it (I really appreciate those who do that!). I had some ice cream leftover at home and it ended up being the inspiration for this contest.
I chose cashews for the cake because I thought it'd be a nice complement. Cashews and bananas go together right? Well, they do now. 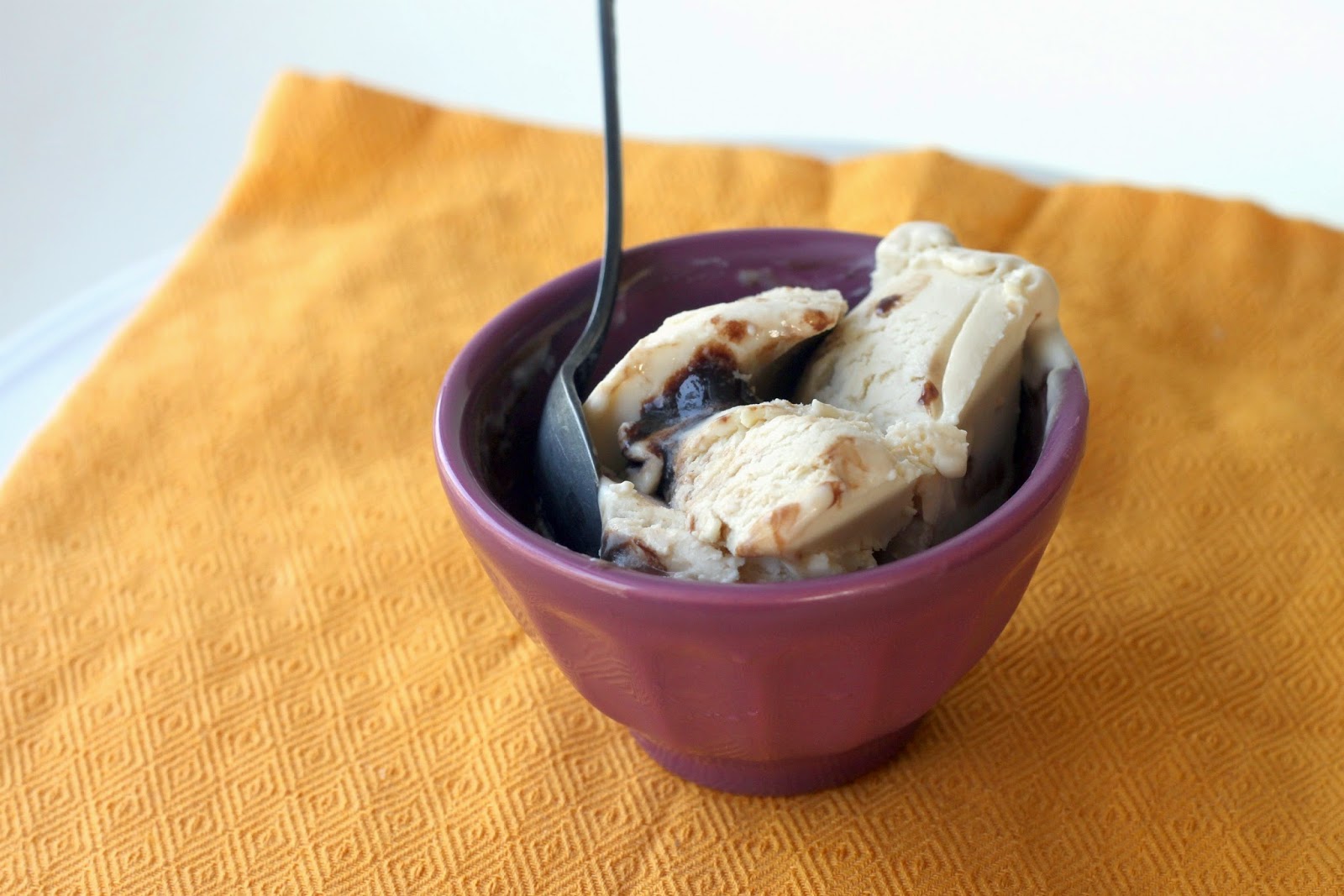 The salted hot fudge had been in my fridge from last week. I've never been a fan of fudge or fudgy things, but it sounded so amazing I had to make it, and then it just fit perfectly with this ensemble. I caramelized bananas for a little extra touch.
Bananas have never been my favorite fruit, yet I've gotten so used to adding them to smoothies, or eating them for breakfast all my life. They have a different sort of sweetness all on their own so I never eat them in desserts (for some reason, I'm not a fan of the combo of banana and nutella, and yes, I know I'm nuts).

For this reason, I was even a bit skeptical of the ice cream. But since I had some overly ripe bananas on hand, I tried it out. The result is definitely banana-y! I was surprised that the bananas didn't need to be roasted or cooked at all and wondered if the flavor would truly come out.
At first bite, I was overwhelmed! The bananas are strong with this one. A tad strong for me, until I paired it with this cupcake. This is where it belongs, fo sho!
I just couldn't get enough. It combines perfectly with this dark and rich chocolate cake, and tastes strangely comforting, like home.
I was hesitant to make this at first, because I thought dark and rich chocolate-y things tend to go hand-in-hand with winter, not summer, don't they? I'm glad I proved myself wrong because this dish is delicious any time of year and can hold its own, even among all the refreshing fruit/icy desserts of summer. 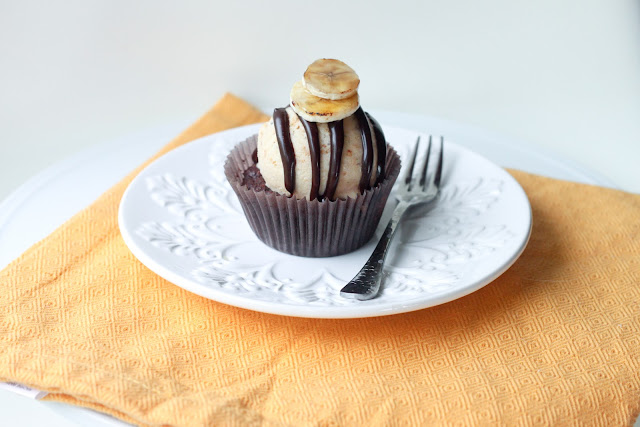 Mix about 2 tbs of the milk with the cornstarch in a small bowl until combined.
Whisk cream cheese and salt in a bowl until smooth.
Combine the remaining milk, cream, sugar, corn syrup, and vanilla in a large saucepan and bring to a rolling boil over medium-high heat and boil for 4 minutes. (Keep an eye on it, or it WILL overflow just when you're not looking).
Remove from the heat and gradually whisk in the cornstarch mixture.
Bring the mixture back to a boil over medium-high heat and stir with your spatula until it slightly thickens, after about a minute.
Remove from heat.
Whisk the hot milk mixture into the cream cheese until smooth.
Cut the bananas into chunks and puree in a food processor. Blend them into the bowl with the rest of the mixture.
Let cool and when the bowl is warm to the touch, cover with plastic wrap and store in the fridge until completely chilled, about 2 hours.

Once chilled, pour into an ice cream machine and churn until it's thick and creamy, following your manufacturer's directions.
When the ice cream is almost ready, warm the white chocolate caramel.
Drizzle the white chocolate caramel into the opening of the machine and continue spinning until it's completely incorporated.
Pack into a storage container, press a sheet of parchment paper directly against the surface on top, and seal with an airtight lid.
Freeze until firm, or at least 4 hours.

Combine both ingredients in a saucepan and cook over medium-low heat, stirring until melted and smooth.
Stir constantly until the mixture turns amber, for about 12-15 minutes.
Continue stirring or the chocolate will burn as the color deepens.
Remove from heat if the color is darkening too quickly.
Let cool, then store in a jar in the fridge for up to one month.

*The original recipe says to use only half of this for the ice cream, but I used the entire amount*

Preheat the oven to 350 degrees F and line a cupcake pan with wrappers.
Melt the chocolate and butter together in a double boiler until smooth. Let cool.
Stir the cocoa and hot water together in a large bowl until smooth.
Add the butter/chocolate mixture, cashew flour, brown sugar, and two egg yolks, whisking well.
In a separate bowl, whisk the egg whites to soft peaks.
Gently fold in the egg whites with the chocolate mixture until combined.
Portion out batter into the cupcake pan; fill just nearly to the top.
Bake for about 20-30 minutes until the top is firm and an inserted knife or skewer comes out mostly clean with a few crumbs attached.
Remove the cupcakes from the pan and let cool completely.

Because Chef Gawle doesn’t own measuring cups and insists that the first thing you need to do is get a scale, these measurements are in grams. But because I love you and all your imperfections, I’ve also converted them to volumes (except for the unsweetened chocolate, which should come scored in ounce-portions).

Equipment:Thermometer that goes up to 230⁰F / 110⁰C (You might make do with one that goes to 220⁰…)Fine mesh strainer, preferably conical (Also not strictly necessary, but will make it smoother and prettier.)

Make sure you have all your ingredients measured out before you start cooking. It comes together fast!

2. Optional: Stir in a few splashes of cream into the cocoa powder, bit by bit, until it forms a smooth, thick paste. Then stir in the rest of the cream. (Dissolving the cocoa this way prevents you from having to whisk it in later, where you might beat more air into the sauce than you want. If that doesn’t concern you, you can skip this step and just whisk in the cocoa after you add the cream below.)3. Stir together the water, sugar, and corn syrup in a small, heavy saucepan and set over medium-low heat. Since the corn syrup nearly ensures the sugar won’t crystallize, you don’t really have to worry about the sides of the pan. Let it come to a boil and watch its temperature. You want to pull it off the heat when it reaches 225⁰F -230⁰F (105⁰C - 110⁰C). At 230⁰F (110⁰C), it’s at the “thread” stage, which means the sugar will form thin threads if you pull a spoon out of it. This also means it will cool into a thick, luscious syrup; this is what gives the sauce that signature hot fudge chewy texture. Cooking the syrup over low or medium low heat lets the sugar develop gradually and evenly, and gives you time to yank it off the heat.  If you overcook it slightly, it’s not a big deal – it’ll just trap some air bubbles. It won’t be as pretty, but it will be just as sexy. (If you get it up to 234⁰F (112⁰C) though, you might be getting in trouble as the sugar will get more solid as it cools.) On the other hand, if you want a looser sauce, err on the side of a cooler temperature. If your thermometer only goes to 220⁰F, you’ll just have to guesstimate when the syrup hits 225⁰F. You can do it, though. I believe in you.4. Stop the sugar reaction now by whisking in the cream/cocoa mixture. Once that’s incorporated, whisk in the unsweetened chocolate. Set the pan back over very low heat and whisk in the butter, a few chunks at a time, until it’s incorporated and the sauce is shiny.

5. Optional: Strain the sauce through a fine mesh strainer, pushing it through with a rubber spatula, to break air bubbles and remove any bits of undissolved cocoa powder.6. Stir in the salt. Taste. (Ok, taste again.) Rewarm in a microwave or by setting the bowl in gently simmering water. Serve with ice cream, other desserts, or, no joke, as a hot or cold spread for bread. Kept in an airtight container in the fridge, the sauce will last two weeks. Well, it'll keep for that long; how long it lasts is entirely up to you.

Caramelized Banana slices
Slice a banana into thin slices, and pour some sugar over the tops of each slice.
Use a chef's torch to burn the sugar on top and let it cool so that it sets.

Assembly:
Scoop a general amount of banana ice cream on top of each cupcake.
Pour the fudge into a pastry bag or ziploc bag and snip off the edge.
Decorate over the top.
Place caramelized bananas on or around.
Enjoy!
Labels: banana bananas cashew chilled treat chocolate cupcakes ice cream white chocolate